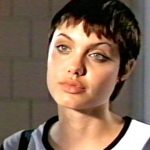 One thought on “ANGELINA JOLIE’S 15 MINUTES: GONE IN 60 SECONDS”