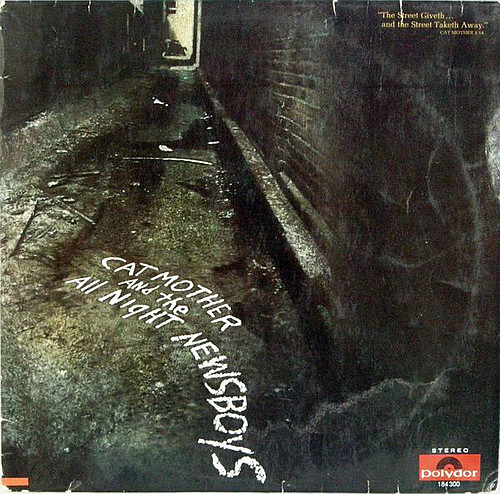 As I mentioned yesterday, here is the first in a series of otherwise unpublished reviews by Lester Bangs. This one is from the August 9, 1969 issue of Rolling Stone, the one with Brian Jones (who just died) on the cover. The band is Cat Mother and the All Night Newsboys (who?), and Bangs gives them a positive review.

My favorite part is this paragraph:

It took me a while to scan this, fix the scanning mistakes, and minimally html-ify it, so while there are more to come, it might take some time. So enjoy!

The Street Giveth and the Street Taketh Away, Cat Mother and the All Night Newsboys (Polydor 24-4001).

This is the kind of set that makes all the hours and money spent on useless, pretentious Art Rock so worthwhile. Because when you buy a record like this one you know that for all the queasy byways you’ve navigated in search of the real thing you’re Home Free again. What we have here, as with all the best (meaning most listenable) groups, is just a bunch of cats, relaxed, enthusiastic and unselfconsciously aware of their heritage, laying down some good wailing feeling sounds. And the thing that you perhaps dig most about it is that it won’t submit to typification by school — it’s not White Nigger ‘Lectric Blues, it’s not gossamer eclectically-derivative Cultured Rock, nor cheery Buckskin Boys spooning out shit-kickin’ steel guitar licks. The only way to classify it is to say that it is, for once, Rock and Roll, with everything the name implies and stands for. To be sure, there is more than a little eclecticism apparent here, but the idiomatic synthesis and the experimentation of the music is all subsidiary to its function as Rock, which function is the delivery of rhythmic, throbbing waves of sound chuck full of good feelings.

For all their talent and inspiration as musicians, it is impossible to speculate whether Cat Mother will ever make a permanent contribution to rock and roll. It doesn’t matter. It is often these non-innovative, journeymen groups who put out the most comfortable and consistently listenable sounds. They don’t feel compelled to try so hard, to reach so far, to maintain mythic reputations — thus, the music of bands like Cat Mother and, say, Black Pearl often shows considerably less strain and a good deal more excitement than the recent work of such “giants” as the Beatles, the Airplane, and even the Stones.

Cat Mother both celebrates its union with its jukebox heritage and transcends it. The album opens with “Good Old Rock ‘n’ Roll” a medley of several classic pieces (“Long Tall Sally,” “Chantilly Lace,” etc.) that simultaneously honors the songs as magnificent artifacts and impresses upon us that they are just as vital and exciting today as they ever were. The real music doesn’t change so much, after all; it is merely elaborated on, while the purveyors of perverted bastardizations fill each season with self-aggrandizing manifestoes and heavy-handed “concept” albums.

The point to which the real traditions have evolved today can be seen in “How I Spent My Summer,” a piece which strikes the listener immediately with its structural
perfection–like some of Traffic’s best work (“Medicated Goo,” say), all the song’s components flow as logically as breathing, the kind of music that seems that it would have existed whether it was created or not, in the wind, in the streets. So close is it to the spontaneous rhythms of life. And the point here is that this spirit of joy is essentially the same, for all subtleties gained, in 1969 as it was in 1956.

“Probably Won’t” is the pinnacle of the album, a steamer building on a powerful piano, riff reminiscent of Jerry Lee Lewis at his best, dancing funk-stomps on the keyboard while tossing off joyously ironic lyrics with the effortless buoyance of the stone professional. And that fadeout is a gasser — country guitar riffs springing al1 around while the singer whistles his way out the door like a gleeful kid strolling handsapockets off down the street.

There are some albums that take a while to at into, because you don’t know quite what to make of them at first, but which reveal deep vistas of complex beauty with repeated listenings. There are other albums which knock your head off the first time you hear them, but pall later on as you begin to see that their excitement is superficial. This is one of those rare albums which knocks you out the very first time you hear it but sustains itself as well, by virtue of its honest exuberance, lucid musical sensibility, and propulsive drive. You’ll find yourself playing it again and again, no uncertain Am-I-in-the-mood-for-this-now deliberations, just a smiling Presence, a place to go which is always comfortable, waiting there for another exhilarating ride whenever the spirit moves you.