Given that the ol’ Spring Fever has spread so far through our lives here in Chicago that I got supremely soused at my man Phil Wise’s house last Sunday and had to leave work early the following day due to “exhaustion” (hey, if it’s a good enough excuse for Matthew Perry…), I have been listening almost exclusively to power-pop opuses since my late-Monday recovery. (Aside to Mrs DeEtta Kambick, my grade school librarian: Sorry about the run-on sentence.)

And my record of choice? Mass Romantic by The New Pornographers. 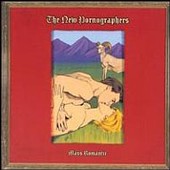 It’s not like they’ve been at it as long as The Knack. NP was assembled, Justice League style, out of a hodgepodge of Vancouver scenesters whose day jobs include the bands Zumpano, Destroyer, and Limblifter. Bloodshot Records stalwart and owner of huge voice Neko Case is even along for the ride on 2 or 3 numbers. Mass Romantic (Mint) has only come to fruition after years of thinking about it, and only then between the other projects of its members (shit, Neko Case lives in Chicago. And that’s nowhere near Vancouver!). Chris Newman is NP’s main cheerleader. While his work in Zumpano has always been a more, ahem, baroque approach to pop, the music here is pure, uncut pop/rock demon weed (can you smell it?). You’ve got your rolling drum fills dropping down into power chords, no less than five-part harmonies, and plenty of snappy songwriting that moves the album along on its fuzzy, sugary tip. Think The Tremeloes fucking around with Weezer’s guitars.

Ballads? New Pornographers aren’t having it. You’re not going to find the sequel to “Heaven” on Mass Romantic, even if Bryan Adams is from their hometown. The straightforward rock of “Letter From An Occupant” or “My Slow Descent Into Alcoholism” plays like music made without pretense, and without the intervention of a greasy A & R dude who “doesn’t hear a single.” After all, NP is compiled of artists who release their records on labels like Mint and Bloodshot. The freewheeling individuality that independent labels offer their artists is soaked into Mass Romantic’s pure pop fiber; it gives the album’s vocals that smiling sound that can only come out of musicians doing what they totally dig.

One of the best things about the set is that it’s Canadian. I’ve never been a huge fan of our Northern neighbors’ musical output. It’s always one step away from Christian rock. The aforementioned Adams, Barenaked Ladies, Our Lady Peace? If they have mullets in Canada, you’ll surely find them at these bands’ shows. (What would a Canadian mullet be called? The Northwest Territory? A Canadian Mounty? Yukon Do It? Ah, Never mind…) All of which makes the absurdly catchy pop/rock of Vancouver’s New Pornographers that much more exciting to hear. Who knows, it’s probably just a one-off album, given the bandmembers’ other projects. But this Spring, Mass Romantic is my album to play frisbie to, and somehow it makes my Pabst taste better.

Maybe I should be drinking a Moosehead?…..Nah. PBR me, ASAP.