GLONO’s Cub reporter Nathan Walker interviews Ben Blackwell, drummer for Detroit’s Dirt Bombs, and gets an earful. Everything from vegan promoters to gear-head homos to the media’s obsession with the Detroit “scene” comes under fire from this ornery cuss. Poor Nate hasn’t been the same since.

The Glorious Noise Interview with the Dirtbombs

I had a chance to ask a few questions of Ben Blackwell, a drummer in one my favorite bands, the Dirtbombs, about a few things that are going on with the band. They’ve been getting a lot of attention overseas and their last album, Ultraglide In Black, is the best pure rock and roll album I’ve heard in a long time. Ben is also involved in Italy Records which has put out 45s of a ton of bands that have something good going on over in Detroit.

GLONO: First, can you tell us about the philosophy of the band? How did you decide on a two drum – two bass lineup? For people who haven’t heard of the Dirtbombs, give ’em a clue of what’s going on.

BEN: The Dirtbombs philosophy can be best summed up with a quote from Socrates: “I drank WHAT?” The two drum, two bass, sousaphone-less line-up came to Mick, our creator, in a dream. John Lennon was sitting on a flaming pig and said, “You will have two basses, two drums, and no sousaphones.” What’s “goin’ on” with the Dirtbombs is a lifetime worth of self-pity, self-deprecation, and self-immolation.

GLONO: I don’t think I’ve ever heard a record of all covers ever sound so great! What made you guys decide to scrap almost all of your original material on Ultraglide In Black?

BEN: Ultraglide in Black was originally supposed to be an album filled with sitar versions of garage classics like “Louie, Louie” and “Gloria.” Somewhere along the line we got bored and decided to record a live album of old soul songs. We never recorded the live album, and eventually we realized we should probably get off our asses and just do the album. 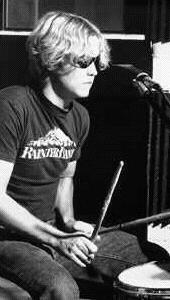 GLONO: Were you shocked by all of the wonderful reviews the album is getting? I received a mailing list from Matador Records where one person put in the top ten for the year.

BEN: Reviews schmeviews…the only reason the guy from Matador put in on his top ten list is because he’s an old friend of Pat, the other drummer in the band.

GLONO: Tell us about your gear. How do you guys get that vintage sound; do you have a philosophy about gear or sounds?

BEN: Talking about gear is for homos. We play what we can afford. Needless to say, we play shitty instruments.

GLONO: With the attention garage rock is getting there’s a real possibility it could get watered down, so let’s set the record straight: What is garage rock and do you classify the Dirtbombs as such?

BEN: Garage rock is an outdated term that should be forgotten by every journalist out there. The Dirtbombs strictly adhere to the New Romantic genre when it comes to describing our sound.

GLONO: Could the attention Detroit’s getting eventually lead to better or worse things for the scene and the city?

BEN: Seriously, if i get another question from someone asking about the Detroit scene… People spend too much time trying to pick at it, define it and classify it, they totally kill any vibe that might have been going on. Just let it be.

GLONO: You’ve toured Europe. How did you set that up? How does a band without affiliation with big labels or agents book a European tour?

BEN: Booking agents came to us…offering us their fatted calves and beautiful daughters, and in the end, we went with some dumbass in the Netherlands who told all the promoters that the Dirtbombs, the biggest bunch of red meat freaks you will ever meet in the rock and roll business, were vegan. We dropped him like like a pile of soiled toilet paper into our vegan-cum-diarhhea soaked toilet bowls.

GLONO: There have been garage rock festivals and showcases in Europe for some time, is touring Europe different from touring the states, as far as crowds are concerned?

BEN: Crowds in Europe are fine. The girls don’t seem to be as much into making out with band members, if at all.

GLONO: Tell us about the Dirtbombs Singles club.

BEN: The Dirtbombs Singles Club is most-likely not going to happen. People just don’t care about us. We’ll be sending out apologies shortly. But if it would’ve happened, it could’ve been the stupidest thing to ever happen in the history of music.

GLONO: You’re also affiliated with Italy Records; how’s that going? Do you see it growing in the future, and if so, are you actively seeking new bands?

BEN: Italy Records gets demos all the time, they’re good for a laugh and to play frisbee with. We’re a bunch of lazy degenerates over there, so not much gets done. Unless you count going to Subway for an Italian BMT sandwich.

BEN: Freddy Fortune’s hair is as awesome as ever. Did you know he used to be the president of the Michigan-area Monkees fan club?

BEN: Hands down the best Dirtbombs track is “Brucia I Cavi.” If you haven’t heard it, do yourself a favor and purchase what many consider to be the greatest rock and roll recording of the century.

GLONO: Last one: how can I be the first kid on my block with a Dirtbombs t-shirt?

BEN: Goto Kmart. Buy a three pack of Hanes plain white t-shirts (your size of choice) and a Sharpie in your favorite color. Open the package, write “the Dirtbombs suck ass” on one of the t-shirts with the aforementioned Sharpie and throw the other two shirts away.

What did you think of this interview? Let us know!

19 thoughts on “Ben Blackwell: A Lifetime Worth of Self-Pity, Self-Deprecation and Self-Immolation”