One man’s tribute to Kris Kross

Atlanta, 1991. Fledgling rappers Chris Kelly and Chris Smith are shopping for Cross Colours at their local mall, when a chance encounter with producer Jermaine Dupri – himself a relative novice at 19 – leads the two teenagers into a new world of stardom and uncomfortable pants…

Under the guidance of Dupri, Smith and Kelly became “Daddy Mack” and “Mack Daddy” – the teenaged Hip Hop duo known as Kris Kross. “Jump”, their debut single, tore up the Billboard charts, eventually spending eight-plus weeks at number one. “Jump” was certainly infectious. Its Jackson 5 sample and hooky flow suggested the anthemic party groove of Naughty By Nature’s best work, but still possessed the gimmick of two kids rocking the mic. And then there were the clothes. Jerseys, jeans, necklaces, even shoes – all worn backwards. Pop music had seen its share of gimmicks – This was the era of Biz Markie and Digital Underground, after all – but the backwards threads gag was one of the best yet.

Kris Kross capitalized on “Jump”‘s success with a few followup singles, and Totally Krossed Out sold millions. But its hard to gain a lot of respect when you’re 13 and your pants are on backwards. 1993’s Da Bomb collapsed under the weight of puberty and faltering bravado; recently, Kelly and Smith have been found on Sony Music, still hanging with Dupri and his So So Def crew.

But no matter how old the two Chrises get, we’ll still remember them in cornrows and backwards Mets jerseys. And that’s exactly the memory that aDam Rulz! is committed to preserving. Through his website, aDam has spread his dream of International Kris Kross Day. Derived not so much from the legacy of Kris Kross’ music as from their trend-setting opposite fashion sense, aDam’s wish is for everyone throughout the world to take one day a year and kick it like the Mack Daddy and the Daddy Mack, circa ’91. 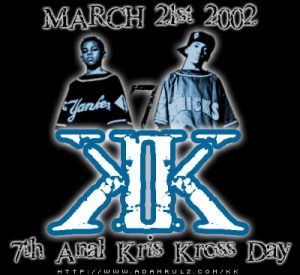 I caught up with aDam yesterday evening, as the 7th Annual Kris Kross Day was winding down.

GLONO: How much success have you had in getting the word out about this dynamic holiday?

ADAM RULZ: Getting the word out was never a problem. I blanket my school with flyers. This year’s Internet coverage has been unprecedented though. The problem is that although most people think it’s a good idea, they’re not often actually willing to participate.

Backwards…everything? That could get uncomfortable.

How much is worn backwards is totally up to the participant. I’ve had people who will only flip an undershirt or a pair of underwear to show their support without looking like a fool. It’s understandable that some people are shy and I respect the effort. A truly Krossed Out look, the one that I do every year, includes backwards shirt and pants. Reversed shoes. Socks with the heels at the top. Backwards coat (local weather permitting) and wearing my bag on my front. I’ve never personally done underwear as it chafes but that’s the real extra mile. The shirt isn’t uncomfortable but the pants are. They don’t look it when you wear them straight, but the crotch of pants is made for forward dressing. Backwards pants puts a good deal of pressure on the … private area. It’s a good idea to whip out your loosest pair.

Kris Kross’ debut record, Totally Krossed Out, sold over 4 million copies out of the box, rocketing Chris “Daddy Mack” Smith and Chris “Mack Daddy” Kelly from shopping mall obscurity to concert hall popularity in a matter of weeks. But like so many talented young artists, the duo was unable to truly capitalize on that success, and after two more albums, faded into obscurity. Do you think that whiz-kid producer Jermaine Dupri’s backwards-clothing marketing scheme was a metaphorical critique of the opposite nature of the record business itself, giving so much so soon to two young people, only to yank out the proverbial carpet when their strength as a commodity is exhausted?

That’s the biz I guess. The two were marketed towards kids, although you can tell by listening to “Totally Krossed Out” that they weren’t some pop band. They were really hard core kids. They later tried to do their own thing but didn’t have much success with their more gangsta rap type music, but that didn’t fly. Who can you blame? The kids who bought it not following through? I think they should be happy to have had their 15 minutes. The industry’s crude but it gives people an in. What happens after that is often up to them and the market. But that’s just my opinion and I can hardly read Jermaine Dupris’s mind. If his fad was indeed a critique it was certainly not well appreciated by the people that dawned the style and it’s certainly not the spirit behind the continued yearly revival of the style in the pure at heart.

What can be done to insert ‘WiggitywiggitywiggityWack’ back into the public’s slang consciousness?

As much as possible I hope. I’ve tried to work my own stuff into the public vernacular but tend to fail. I was just thinking earlier today that “WiggitywiggitywiggityWack” should be used in next year’s campaign only I couldn’t imagine how I would even start to spell it. Thanks.

Like Pop music, Hip Hop is cyclical in nature. What’s the chance that wearing clothes backwards will come back into fashion? Dupri is still active; might he opt to bring the trend back?

I certainly hope so. Lots of things come back and an idea as simplistic as wearing your clothes backwards is a possible modification of any outfit. I think that the problem the style currently faces is that it’s still associated with Kris Kross and people would feel more like they’re stepping back then forward by bringing back the fad. I think once kids don’t know about it’s first coming anymore it will be time for a fresh start. They can think they invented the style themselves in their ignorance if it helps things. I won’t be doing anything to distance the idea of dressing backwards from Kris Kross but time may.

14 thoughts on “BABY GOT BACKWARDS”