KPOWW takes it to the house

By bringing their street-level, lo-fi wrestling show to the punk rock people, The Kalamazoo Precinct of Women Wrestlers has cracked a giant Samsonite folding chair called FUN across the back of Vince McMahon. KPOWW!

Firing from the hip and foaming at the mouth, McMahon made a fortune from re-inventing professional wrestling (again) as a Bacchanalian circus, seemingly broadcast from inside the head of Josh, your 14-year old neighbor. But the same over-exposure and bombast that made the WWF (now WWE) such a cable-ready success also marginalized wrestling itself. You can’t watch a wrestling match anymore without it being interrupted by yakking blowhards, trashy women, or a series of flashpot explosions and laserbeam shafts that camouflage the fact that nothing’s really happening. “Smackdown” has become a signifier of America’s transformation into the world’s largest trailer park. Of course, there’s a part of wrestling that’s always appealed to the lowest common denominator. It’s voyeuristic, garish, and can bludgeon you with its cartoonish simplicity. In other words, it’s easy to follow and gives you a rush.

But diluted and refined into its purest form, wrestling is inherently about good vs. evil. Silver masked Rodolfo “El Santo” Huerta, the most famous of Mexico’s Lucha Libre wrestlers, began his career as a bad guy. Eventually however, he felt the peoples’ need for a hero. Aided by a series of superhero comics (as well as a string of Z-grade movie productions like 1961’s Santo VS. The Zombies), he became a national treasure. The biggest stars of contemporary wrestling have been those that combine their talent in the ring with an actionable persona. “Stone Cold” Steve Austin, The Rock, Mankind – even Hacksaw Jim Dugan or The British Bulldogs – these were characters elevated to a higher level by the fans. Like El Santo before them, they were in many ways created by the fans’ desire for more. A svengali like McMahon only has the talent to recognize when this happens, and capitalize. 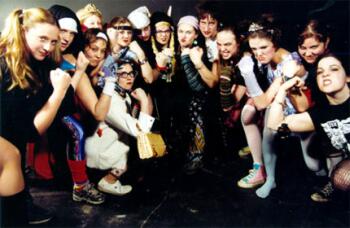 Here’s a concept that works: Remove the svengali, and solidify the line between fan and wrestler.

That’s exactly what KPOWW has done. Operating at a grass-roots level, on a DIY budget, the Kalamazoo Precinct of Women Wrestlers succeeds where the WWE overachieves. Accompanied by emcee “Rock and Roll” Randy Robinson, a referee, the punk rock assault of The Clap, and a simple tumbling mat, the women of KPOWW stage their battles and fight their wars with the aplomb of anyone in the stables of the WWE, WCW, or even GLOW.

It begins with Robinson. His shtick is one of a stumbling, jaded comic, too washed up to realize that the wrestlers are the real show, but too drunk to care. It’s just enough of a bit to string together the 10 or so wrestling matches that follow. Any more of a setup, and the visceral link between performer and public that KPOWW clings to would begin to waver. As it is, the matches start with a push or a punch, likely involve a few crowd-pleasing takedowns, and end with the immediacy befitting a crew that understands their place. After all, the Chicago KPOWW performance June 22 was at The Empty Bottle, a club known more for rock than wrestling. And to be sure, there were a few puzzled glances from the bar. If you happened to walk in off the street to see Corporate Christy piledriving Jewel Merchant into the mat, with The Clap pounding out an instrumental version of “Anarchy in the UK” about 3 inches from the wrestlers, you might stop and wonder, too. But winning over a crowd is something Robinson and the women of KPOWW do with the panache of Lush opening Lollapalooza in 1993. By the third match of their Chicago appearance, KPOWW had the crowd pumping their fists and yelling oaths at the villains. Which is just what a wrestling crowd should do.

It’s a grand idea, combining the buzzsaw energy of punk with the single-minded ethos of wrestling. And while KPOWW fuels their concept with healthy amounts of showmanship and twist of character (Jane Gretzky, The Maneater, and Miss Congeniality were just a few of the other wrestlers on the Chicago card), there’s thick layer of ironic Durkee’s onions holding this casserole together. But when has irony not been part of wrestling? That’s the great thing about KPOWW. All the things that have made wrestling great over the years – from El Santo to “Superfly” Snuka to D-Generation X – they’re all in KPOWW’s ring. But there’s the punk rock bonus of The Clap, and no sticky, blathering aftertaste of “WWE Smackdown”-style posturing. Put another way, you don’t feel like you need a shower after watching KPOWW wrestle.

You didn’t know? You better ask somebody.

4 thoughts on “CAN YOU SMELL WHAT K-ZOO’S COOKIN’?”