I don’t know if we’ve talked on this site in the past about the issue of celebrity encounters. Like whether you go up to someone you admire, who’s famous, or just let them cruise around your environment freely, pursued only by furtive glances, even though you love and may have analyzed their work to such an extent that a conversation with you would be pretty rewarding, minus your slavish, stuttering hero-worship that would probably ruin everything.

Recently, I was burned by a celebrity encounter I’d rather not describe in detail. Suffice it to say Michael Imperioli, who plays Christopher on The Sopranos, didn’t seem too thrilled to give me an autograph in Union Square in New York. I don’t normally approach famous people for their autographs, but Michael Imperioli had been making eye contact with me, I was in the throes of an obsession with The Sopranos, and I was fooled by what I mistook for encouragement on his part. But the encounter was so chilling I vowed never to bother a famous person again. Never try to talk to one, never tell them what they mean to you, never pierce their bubble. 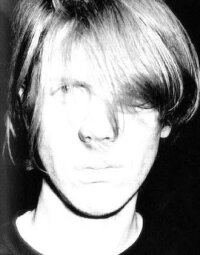 But who do I see while I’m waiting for a subway last week but Thurston Moore! At least I think it’s Thurston. He looks kind of shabby, with run-down old sneakers you wouldn’t normally see on a famous person, but he definitely has that mop of hair and an old cordurory plaid jacket – a real Thurston look. But what made me think it probably wasn’t Thurston was he seemed to be returning my interest. We were waiting for the L train and as it pulled up, I walked down the platform a ways to get into a different car, giving Thurston room, letting Thurston not feel persecuted. But he followed me, and sat opposite me. He even looked at me directly, like he would talk if I wanted to.

First I thought: Maybe Thurston and Kim have broken up (ridiculous) or maybe – far more likely – this isn’t really Thurston Moore. It’s someone who trades on looking so much like Thurston Moore that women will come up to him in the subway, start conversations, and even fall for him because of an associative glamour. I buried myself in a book, relieved I hadn’t fallen for the fake-Thurston-Moore.

But four days later I saw the same person in St. Marks Books. He was reading the music magazines. I thought, Ah, it’s the Thurston Impersonator! He’s even reading the big feature on Sonic Youth that Wire has this month. I scanned his frame, thinking that he wasn’t quite tall enough to be Thurston. Again, I was relieved I hadn’t accosted him on the subway. Still, it was a strange coincidence to see him again, and reading a feature on Sonic Youth. I saw an employee murmur to a co-worker, “Thurston Moore.” So it was him. And the strange thing is he seemed kind of lonely, the way fake-Thurston-Moore had. But remember Michael Imperioli, I kept telling myself. He seemed friendly, and then he wasn’t. Maybe Thurston’s normal expression is kind of mournful. Maybe he’s not looking around for some friendly, Sonic Youth-obsessed person to talk to.

But of all the celebrities you might risk talking to, wouldn’t Thurston be the most approachable? (So went my celebrity-addled mind.) He’d be nice, he’d engage in a dialogue! I could tell him I learned his song “Unwind” from Washing Machine! I could tell him how much Sonic Youth’s music starting from Daydream Nation meant to me! (Even though I know real musicistas would say they were with Sonic Youth from the start – but not me, I always get on the bus with groups just as they release their sell-out albums.) Anyway, just to tell Thurston what a huge impact his band has had, on me and on many people I know, and how brilliantly they captured moments of churning, haunted, or defiant feelings with their lyrics and their gorgeous, weird-tuned melodies – wouldn’t that be worth bothering him for?

But what about sounding like an idiot and embarrassing myself in St. Marks Books? My ex-boyfriend browsed close by, oblivious to Thurston’s presence. If he noticed him, he wouldn’t be excited, either. His position is that Sonic Youth are just part of a continuum of pop music, with no different a cultural impact than someone like Hall and Oates. He’d be embarrassed for me if I started gushing to Thurston Moore. And what about my own recent lesson with Michael Imperioli? Hadn’t I learned anything about the New York celebrity vibe? So I stared fixedly at the book I was reading, ignoring Thurston till, a while later, I glanced up to see him loping over to the Sci-Fi section near the exit. After a brief browse there, he left.

But it felt all wrong. I was still convinced that Thurston was somehow lonely and was looking for people who wanted to talk about Sonic Youth. As we left the store, I told my ex-boyfriend about the sighting, saying I thought Thurston had looked sad, and perhaps lonely. I said maybe the mood of the city after September 11 was making him melancholy. My ex-boyfriend snorted at the idea of attributing any particular emotions to Thurston. Sometimes it’s jarring to come up against the non-celebrity-obsessed mindset, especially when you’ve just been feverishly reading the body language of a celebrity who’s of great significance to you. But the irony is, it’s the non-celebrity-obsessed person who would probably be able to engage more authentically with the celebrity.

And the question is, do celebrities have any interest in hearing from their public in person, or is it just one big drag for them to be approached by strangers? Does anyone else have stories/thoughts to share on this? Click here to discuss…

Kristy Eldredge is a freelance writer living in New York City and seems to get obsessive about indie-rock stars. Read her previous GLONO piece about the band Quasi.

37 thoughts on “Close Encounters of the Punk Kind”