The Pee Wee Fist was allegedly named after a martial arts movie about a very short ninja. The existence of this film cannot be confirmed at press time, but there is no denying that the band’s album, Flying, released last year on Kimchee Records is an exciting and adventurous debut. While some of the songs are not immediately accessible, most of them are worth putting a little effort into. They get under your skin once you get to know them.

The band is the baby of Pete Fitzpatrick, who might be better known as the guitar player and multi-instrumentalist in Clem Snide. Pete was nice enough to answer a few of our questions before he headed out on tour. They’re playing Chicago’s Beat Kitchen on Saturday, September 21, so catch them if you can.

They’ve made a couple songs available on their own website (Flying, Chinese Star in Metal Shop), and Epitonic has another one (Beauty and the Beats), so you can see for yourself.

GLONO: When I saw Clem Snide in Chicago this year, I was surprised how much you guys rocked. The albums are pretty introspective and moody, so to be honest, I wasn’t really expecting such an engaging, fun performance. You guys all really seemed to be having a great time. Can you tell when you’re really connecting with an audience? How cool is that?

Pete: Yeah we always have a pretty good time together. We’ve been friends for a long time and I think it comes through on stage. I love playing with those guys. I think we all give the songs a little extra Vitamin C in the live setting.

We have a pretty broad sonic palette. We can get pretty wall-of-sound-y when we aren’t soft-rockin’, but then it’s pretty intense when we bring it down real small. That’s when you know the crowd is with you, when they pipe down for the quiet stuff. So yeah, that’s pretty nice when that connection gets, uh, connected.

For fans of Clem Snide, how would describe what the Pee Wee Fist is about compared to your other band? 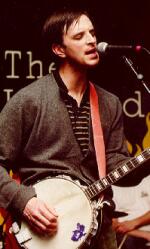 I suppose The Pee Wee Fist is a little looser than Clem Snide. The Fist is somewhat amorphous, in that one never knows how many people will be onstage at any given show. It started out as just me, and eventually I’d book a gig and then find whoever was interested in playing the show. Each gig was a new adventure. One early show featured guitar, tuba and two drum sets. Eventually, the same people kept showing up, so it’s been a relatively steady line-up for the past few years. It’s been nice because we’ve really sort of gelled in the past few years.

The Fist probably visits more territories, stylistically speaking, than the Snide. We have some “art-country” banjoey tunes and we have some 9 minute love jams and some 2 minute tasty pop nuggets and we’ve been known to get a little psychedelic every now and again. I think it’s fun to keep the audience guessing. Especially live. I suppose that demands a lot of the audience, but I don’t worry too much if they’re not with us every step of the way. I probably wouldn’t want to drive across the country with 97% of them anyhow.

I like bands that take chances. There’s not enough danger in rock and roll. When we’re playing, we could train wreck at any moment. Not because we don’t care, but because we are looking for a little magic here and there.

Did you abandon the Pee Wee Fist to join Clem Snide, or was the project always on the back burner?

I’ve been involved with lots of bands. The Pee Wee Fist is very special to me. I don’t think of it as “on the back burner” really. I got two front burners. I had to streamline this past year when Snide started touring so much. I quit Naftule’s Dream and Shirim, both really fun bands, in order to lighten the load. So The Fist and Snide are my two main passions these days.

Tell me about the different instruments used on the album… I love strange sounds in music. To me, there’s nothing better than hearing a record, and thinking, “What the hell is that?”

And when you say to yourself “What the hell is that?”, you can come up with something much more interesting than “a theremin” or “a backwards gong”. “Sounds like wings flapping in a wind tunnel…” or “Sounds like a wounded hornet…” or “Sounds like someone’s sawing through the ice on a lake”. Or maybe the sound becomes defined beyond words — you just get a warm and fuzzy feeling when you hear an accordion silently wheezing through a Rat pedal.

There’s a Polvo song that starts out with what sounds exactly like the door-closing warning bell on Boston subway cars. So, pretty much every time I’m on the train here in Boston, I’m singing Polvo because just before the doors close that little ditty gets triggered in my head. I asked Ash (the Polvo guy) if he sampled the train. When I found out it was just a Casio keyboard, it lost a little magic. That sort of thing is usually best left unsolved, I guess.

Yeah. We’ve got lots of sounds. We used some eclectic instrumentation on that record. It’s fun to squeeze sounds out of things. In the end, though, the instrument is just a vehicle you use to get somewhere. Everyday instruments can make some pretty strange sounds, too. I’m doing a sci-fi soundtrack with a string quartet and a trumpet player, where I play electric guitar and my job is to sound like a time machine. I love that shit.

As far as The Pee Wee Fist is concerned, no matter what sounds are going on, if the song sucks, the song sucks. The words are usually the most important part of the song to me. The music plays a supporting role.

Do you own any instruments that you love but that you can’t seem to find a song that they would work with?

Recently acquired a (sea-foam blue and brown) baritone guitar. It’s such a different animal. It sounds great, but if I make up a song with it, then that’s one more thing I’ll have to carry to the next gig, so I’ve been leaving it alone.

How did you hook up with Kimchee Records? Are they cool? What’s SpinArt like? They’ve been releasing some great stuff lately…

One of the Kimchee guys has a local radio show in Boston. He was basically sick of us not having an official release, so he offered Kimchee’s services. They’re cool. Very ambitious. They’ve released lots of stuff in just a few years. They got a lotta heart. They want people to hear the bands they like.

As for SpinArt, they’ve treated Clem Snide pretty well. Everyone I’ve met there is nice.

We talk a lot on Glorious Noise about the DIY aesthetic and how you don’t need a major label to make really great music that really matters to a lot of people. How long has it been since you’ve had a day job, and was it scary to make that leap? Any advice for musicians just starting out?

I had to quit my day job at a library a year and a half ago when Snide started touring a lot. The main scary thing is the lack of health care. My 87 year-old pal (who sings with me on the record’s hidden track) told me to drink cod liver oil every day.

I guess being broke kind of sucks, too. I’m taking the Fist on tour for two and a half weeks with no tour support from anyone. You do what you gotta do. Tomorrow I gotta go plant a truckload of flowers. I’ve been working part time with a master gardener, planting things and whatnot. I recently moved a 30 foot black walnut tree from a front yard into a back yard. I laid down a brick sidewalk (in a basket-weave pattern). That was pretty fun.

As for advice to musicians just starting out, I don’t know. Don’t feed dogs chocolate. Ha ha. No seriously… let’s see… I guess I’d say that nothing is free and everything is relative and try to keep on the sunny side.

Well, that’s the best I can do for now, Jake. Gotta get to plant stuff. Thanks a lot.

The Pee Wee Fist are currently on tour, and you can buy their album from Amazon.

10 thoughts on “Interview with the Pee Wee Fist”