Elvis means a lot of different things to a lot of people. To some zealous fans, he is a hero worthy of being impersonated. On the other hand, Public Enemy’s Chuck D considered him “straight up racist…simple and plain.” But before you motherfuck him and John Wayne, consider this: Elvis was just a kid who was moved by good music. Physically moved by it. He heard songs by Big Boy Crudup and by Bill Monroe and sang them with passion that shook up the world. 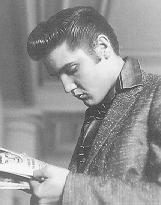 Elvis wasn’t the first honkey to imitate black musicians, not even close. Bill Haley beat him to it by several years, and let’s not even get into Stephen Foster and the weird, mean world of minstrelsy. Elvis wasn’t even the first to popularize the rebel attitude: Marlon Brando beat him to that punch in “The Wild One” and “A Streetcar Named Desire.” But he mixed up country and western music with rhythm and blues, and he donned black men’s fashion with a respectful Southern drawl, and he shook those hips and snarled that lip and dabbed a dollop of Royal Crown hair dressing his hair and pretty much defined “cool” for white guys from there on out.

He made a lot of bad decisions and allowed others to manipulate him, and he kept going on stage well after he should have stopped to take care of himself.

We’ve been hearing a lot of people talk about Elvis this week, leading up to today, the 25th anniversary of his death. And most of it is a bunch of crap, including this article. Just listen to his music. Bust out the Sun Sessions or the 1969 Memphis recordings and just listen. Rock and roll doesn’t get better than that.

11 thoughts on “Rock and Roll Can Never Die”