Swedish four-piece Sahara Hotnights arrived onstage Wednesday night at Metro with ofantlig chips on their shoulders. Can you blame them? When you’re supporting one the best rock acts around (The Mooney Suzuki), and you only have a half-hour to prove to a new city that you’re the shit, how would you handle it? Kick out the jams, motherfucker. 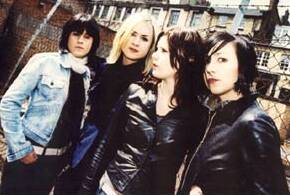 Doing just that, Sahara Hotnights never removed the switchblades from between their teeth. And those chips got smaller as the fists in the crowd pumped higher. Hammering notes on her black Les Paul, vocalist Maria Andersson traded lead licks with fellow ax grinder Jennie Asplund. Asplund’s sister Johanna, standing stalwart behind her Fender bass, must have practiced her sneer in the mirror a thousand times. But when you grow up bored and irritated in Sweden, what else are you going to do? By mid-set, the wild ones in Sahara Hotnights knew the crowd was their little plaything. But like an anger management course gone rogue, the band must not believe in stopping to smell anything other than the cloud of high-octane blue smoke in their wake. Pausing only briefly to allow Andersson a few more moments of crowd rallying, drummer Josephine Forsman immediately launched into ANOTHER fright fest of Ludwig-shattering fury. And somewhere Gina Schock sighed, wishing she was still young.

Sahara Hotnights’ influences are the sort that you note, accept, and promptly lock in a closet while you punch out all the windows in your house, so everyone in your neighborhood can hear the Hotnights’ Jennie Bomb at full volume. Embodying elements of The Pretenders (think “Middle of the Road”), Judas Priest, early Aerosmith, and – of course – The Stooges, the band’s music is sublimely derivative. Think you’ve heard it all before? You’ll change your tune when Sahara Hotnights wraps their hand around your pencil neck and squeezes. After watching them rock the house for their brief set, I half expected the band to climb onto idling motorcycles in front of the club, guitars strapped on back and drums riding in side cars. Stopped for comment by a weezing reporter with “PRESS” stuck in the band of his fedora, Johanna Asplund would light a wooden match off the guy’s eyeglasses. “Ms. Asplund, Ms. Asplund,” the reporter would sputter. “What is your band rebelling against?”

Asplund would turn her collar up against the chill, and take a long drag off her Lucky Strike. She’d fix her gaze on the mope through the lank hair hanging in her eyes.

And with a throttling of their bikes, Sahara Hotnights would rumble off to Detroit City, Cincinnati, or some other smoke-belching burg, spitting out nails and knocking over party stores for beer and bike solvent.

8 thoughts on “Sahara Hotnights: Thank you sir, may I have another?”