It was crazy, and everyone around us knew it. The giant seemed nice enough. It’s just that, at that moment, inside that club, with the Warlocks freaking the fuzz onstage, this enormous, leather-clad longhair furthered the effect that the band laid out. It reminded me of Lollapalooza 1993, when Jane’s Addiction brought out the stiltwalking puppets for their encore. (Was it “Three Days”? Can’t remember…) As the spooky marionettes did their thing, Jane’s banged away in sonic freakout heaven. Which is a place that the Warlocks spend a fair amount of time. 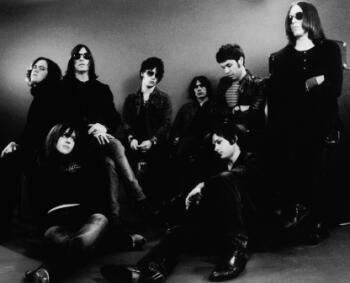 On Saturday night, they transformed the Double Door creepy funhouse hall of mirrors. The Tallest Man In The World stood resolute, the drug-rock Gheorghe Muresan just digging the crazy beat of the band. I kept expecting a centaur to walk in and order an orange whip. Because even if you’re not on drugs, the Warlocks will still make you feel like you should be.

Imagine the middle section of Zeppelin’s “Whole Lotta Love.” Add another Bonham, and cross your eyes so you see Jimmy Page in triple. Then put a thrift-store copy of Pink Floyd’s Atom Heart Mother on the turntable. Finally, invite the scary people that lurk on street corners in the bad part of your town over to drink all of your beer and grind cigarettes into your brand new chaise lounge. Do all of this, and you’re close to the vibe coming off of the Warlocks.

Phil Wise and I didn’t get a chance to ask our tall friend what he thought about the band Saturday night; we wondered if he knew that his presence at the show made it that much better for us. But as we left the club, dizzy, we imagined the guy walking home down the alley, Elvis shades still on in the dark. And we thought about the Warlocks, stopping their van at a truckstop somewhere out on I-80, piling out of it to buy Slim Jims and bottles of Jolt. You’ll run into the tall guy as he’s walking down the alley – your headlights will catch him and you’ll freak out for a second until you realize he’s just a guy, walking down the alley, being really tall. And the clerk at that truckstop, out on I-80? He’ll cower a bit when Hecksher and his merry men glide like ghouls into the bright lights of the store. He’ll feel safe only after that van’s taillights fade into the night. The Warlocks (and the tall guy) do that to you. They leave an afterimage; they leave tracks in your mind.

Read the Glorious Noise review of the Phoenix Album. For more info on the Warlocks, visit their site or stream live Warlocks material from the Digital Club Network.

4 thoughts on “The Warlocks: I’m Freaking Out!”