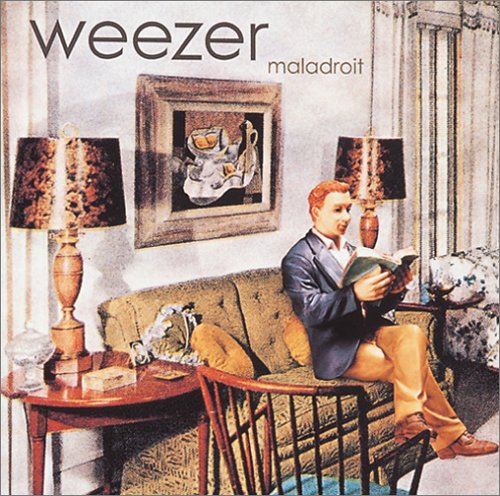 Glorious Noise and the rest of the world made a very big deal a few weeks ago when Wilco’s new album, which had been rejected by their record label, debuted at number 13 on Billboard’s album chart. It proved, we said, that not only are record company executives weak in the head about what kind of album can sell, but also that peer-to-peer file sharing doesn’t hurt sales. Remember? Wilco streamed their album from their website months before its release, and all their fans traded bootleg copies of an advance release? And it still sold an assload.

Well, our old friends in Weezer one-upped those guys by posting mp3s of their new songs as soon as they left the recording studio each night. These were not just demos; they were that day’s finished products. And not only that, but they even solicited feedback from all the crazed Weezer fanatics on the message boards (and I mean no disrespect by that).

The band paid for the recording time out of their own money, fired their manager, and then mailed self-pressed promo cds to radio stations with their lead-off single, “Dope Nose.” Of course, Interscope/Geffen stepped in, made them recall the unofficial promos, and promptly set a release date for the new album, Maladroit (named by a fan in a contest on their website).

So what do you get when you ignore your label and listen to your most obsessive fans? Another good pop album, except this time with more metal flourishes. And it debuted at number 3!

Metal has always been a part of the Weezer scene from the poster of Quiet Riot in the liner notes of the Blue Album to the ass-kicking drum sound on “Why Bother?” (and all of Pinkerton, for that matter). But now they’re flying their metal flag high with riffs and a guitar tone to match Rivers Cuomos’ new beard, which makes him look like James Hetfield’s retarded little cousin.

But is it any good? It’s better than the last one. It’s looser and not as polished. There are goofy falsetto background vocals (trying valiantly to recapture the glorious Matt Sharp era). There are crazy guitar solos unlike the boring “follow the melody” solos of the last album. There are some good lyrics and some emotive singing. It’s good, it’s fun, what’s not to like? Well, I’ll tell ya…

There gets to be a point in every music lover’s life when you start thinking about minimalism. These ideas usually occur when you’re considering moving into a new apartment and lugging your cds and records down three flights of stairs and up three more. You start to think: how many AC/DC albums do I need? I need Back in Black and Highway to Hell of course, but do I really need For Those About to Rock? What I’m saying is this: if you’re going to take two Weezer albums with you, they’re not going to be the Green Album and Maladroit. Harsh, but sadly true. Weezer has rendered itself irrelevant by stooping to the level of all the Blink 182s and Sum 41s that it spawned and cranking out fun but unsubstantial albums.

I’ll keep buying the albums. Just like I’ve continued to buy the Beastie Boys albums since Check Your Head. Sure, there were a lot of good songs on Ill Communication and a handful on Hello Nasty, but really, if you had to take only three Beastie Boys albums, they’re going to be Licensed to Ill, Paul’s Boutique and Check Your Head. There’s no question.

But this is all hypothetical, isn’t it? I’m not going to narrow down my record collection to the bare essentials and neither are you. I’ll keep buying all that shit, and I’ll hire movers when the lease is up. Now, if I can’t afford movers, I can’t afford to move. But at least I didn’t buy the new one by Neil Young. One small step for man, one giant leap for a music freak.

7 thoughts on “Well, It’s Better than the Last One”