The Glorious Noise PO box is a bustling miniature economy, forever striving to support the cottage industries arriving via sleeves of manila. Some fail. Too many tongues in the kitchen building towers to the sky, smashing glass houses with Billy Joel stones. But others thrive, whether by a buoying of collective belief or the simple, logical, largeform realization of a stranger’s hard work and talent. And then there are the others, the oddities, the answering machine messages that continue to play in landfills underground. What do we do with these errant structures? Listening to them late at night, it’s like someone built a Sonic in the center of our 8-way intersection. Shadow Boolean is one of these records. It arrived a few months ago, loosely packaged in a storebought CD-PostBox. No fancy foam here, or glittery stickers exclaiming hyperbole over the lame emblazoned name of your cousin’s Apple IIc record label. GloNo address; return address; two Dorothea Lange postage stamps. Inside, a Memorex CDR. ‘Deepgrave min og dog’, it said, the letters jumbled like word jazz in text. What happen? Somebody set us up the bomb.

But of course the mystery of min og dog and Shadow Boolean is only heightened by its unadorned arrival. Without the normal static of one sheets, bubble wrap, and ambitious cover art, it appears not as a submission for review from struggling musicians, but as a dispatch from some floating pirate studio – field recordings from the center of space. You don’t expect it to simply play music when the disc hits the laser. No, you expect it to speak to you, give you a string of strange runes and schematics. We need Tom Skerritt and Jodie Foster to help us put these plans together.

Turns out we don’t need Viper after all. A Web search for Deepgrave min og dog turns up a Soundclick.com listing, where the project’s principals help unravel the sonic spool. ‘GRUNGE ELECTRONIC MUSIC WITH BEATS SOMETIMES’, they describe Deepgrave as. Hey, there’s that tortured English again. Nevertheless, it’s a startlingly appropriate description. Boolean might best be characterized as drill ‘n’ bass, that hungry, shit-eating offspring of jungle. Frenzied BPMs support fierce loops turning themselves inside out over shards of sampled guitar and disembodied screams. Is this electronica or a spooky sounds novelty disc played backwards? Maybe it’s both. Deepgrave min og dog doesn’t seem to care WHAT their music actually is. It shifts violently and without tact from disorienting washes of sound to shuddering blasts of distortion – the fourth track sounds like a clattering washing machine at the end of its cycle, desperately trying to birth the lovechild of Richard D. James. Later, a voice rises from the mooky din. “The chipmunks are finished gathering their nuts,” he says. “The [indecipherable] is now full. Now…they are tripping on acid.” There’s not much happening behind him – rhythm is created by a whirring synth and what sounds like an amplified Morse code signal ticking away in the distance. Still, the sequence is unsettling, like a shortwave numbers station transmission piercing the midnight static. Atencion! Seis. Seite. Tres. Siete. Cero.

Is Shadow Boolean some sort of culture jamming? Deepgrave Min og dog sent 700 nearly unmarked CDRs to just as many Web sites to see who’d bite and spread the goofy gospel? Maybe. But it might also be that 21st century rarity – music made without elitism – deriving its odd magnetism from clean-burning, uninfluenced creativity. In this scenario, the brains behind Deepgrave min og dog would be a mild-mannered mattress salesman, happily living alone in a well-appointed farmhouse. Bored with television and sick of reading, he buys some cheap sampling equipment with the notion of recording his tentative forays on the keyboard a dormer left behind. Things unfold pleasantly enough, as “Old Folks at Home” leads to “Yesterday.” There’s a blur then, a few months of mattress deal days and mind-scraping and motherboard-soldering in the farmhouse attic. Its windows are awash in the sparks from his arcwelder. When the salesman finally comes to, he finds he’s constructed hundreds of bizarre ropes of sound, the products of a brain proudly spewing snots of creativity from behind a wall of complacency. Like a mantra he chants it, the jumble of letters and half-formed words he saw in a chaos theory revelation from mildewing crosswords. “Deepgrave min og dog.” “Deepgrave min og dog…Shadow boolean.” Cords snake through the house, cinched with plumbing joints to slapdash effects units powered by hot plates and toasters. He’s created a monster with beats sometimes, and no one wants to buy mattresses no more. Don’t expect it to tango; it has a broken back. But it’s the loving runoff of a mind shattered by mundanity, a freaky soundwave mess that makes music evil again.

That, or it’s just a couple of kids with phonic issues and a track list written on the back of an envelope. 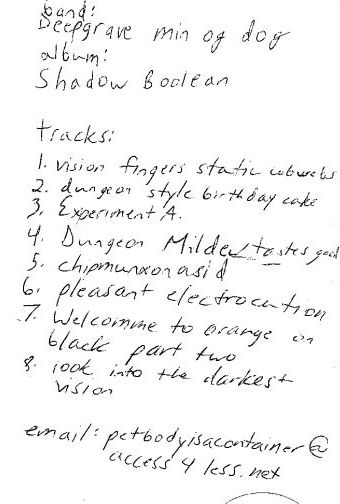 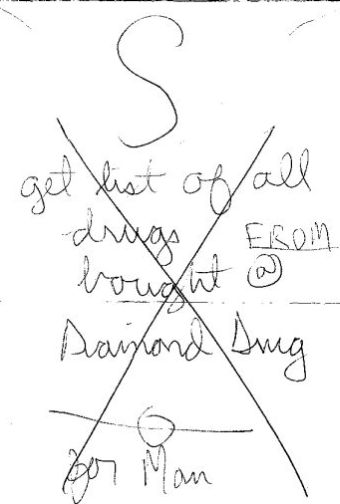 You too can experience some Deepgrave min og dog via Soundclick.

5 thoughts on “And the Ground Will Burn Beneath Their Feet”