One morning a few months ago, I flipped on the TV and was caught by the image of a woman who looked incredibly tough and mean. Demuting to learn why this contemptuous vixen was being featured on morning TV, I found I was on NBC and the snarling woman was Lisa Marie Presley. Then it made sense. Lisa Marie Presley is an American icon, even though at the moment she may come across as the sullen product of a broken, dysfunctional home. No matter! Elvis Presley is American royalty and so, by extension, is his daughter, who’s working hard lately to promote a recording career of her own.

Can she sing? From what I could hear, no. It’s sad, truly. She’s inherited virtually nothing of her father’s velvety pipes. But she has something almost more interesting. She’s tough and self-protective, which Elvis never was. She’s not going to smile and play nice, which Elvis always did. She grew up in a decadent, unhappy environment and she’s not going to tell one nice lie about it. “Who’d you get comin’ over to the house?” David Letterman asked her on a recent appearance, maybe thinking she’d reminisce about some show-biz legends. “Groupies,” she said flatly. “Groupies, and a bunch of married men who went with them.” “So… that gave you an early education, didn’t it?” Letterman, one of the few talk show hosts who listens to the deep meaning of his guests’ responses, said. “It gave me a real early education,” Lisa Marie replied evenly. “It made me see the world was sick long before I could cope with it,” she could have added. She didn’t, but it was implicit in her cool, polite non-smile.

See, that’s the shocking thing about Lisa Marie Presley. She’s a girl singer who doesn’t do girl things. She hardly ever smiles, and she speaks in a low voice. Those two facts alone make her seem like a fascinating, subversive rebel. In an era of ubiquitous squealy-high speaking voices, Lisa Marie’s low, unexcited tones and stony deadpan come across as almost insolent. But she’s not unfriendly, just terminally unsurprisable. She’s seen it all (remember, she was married to Michael Jackson). Resembling each of her parents equally, she seems to be fighting a battle to lay claim to herself. Anyone who was touched by Elvis Presley’s dazzling talent and troubled fall will be struck by Lisa Marie’s solution to being his daughter: Eyes narrowed, face inscrutable, she seems to be watching out for danger like her father never did. 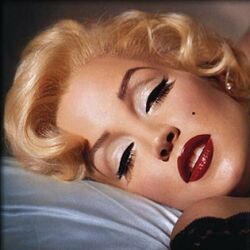 From “Making Faces” by Kevin AucoinOn the Today Show, where I saw her that morning, she was performing an undistinguished song. Her voice is monotonous, literally—she seems to have about a three-note range. But the attitude she cut when uber-weeny Matt Lauer came, supplicant-like, onstage to talk to her! Casting bored, patient eyes on him, Lisa Marie was kind enough to rustle up reasonable, if brief, replies to his questions. “Is the album more ___ or more ____?” he cried earnestly, as if his life depended on her answer. “It’s just—the way it is,” she said. Calm. She was indifferent to him. But when he mentioned the fans, she flashed them a smile and it was clear that this is where Lisa Marie’s heart lies.

She loves the fans. Not only loves, but respects (unlike the entertainment media). When she slipped on a rainy step and fell during her Today Show appearance, she was quickly back on her feet, flashing a grin to reassure everyone and alleviate her own embarrassment. Signing autographs, she was the picture of amiability. She wasn’t withholding herself from these people. They’re the ones who get her warmth, not anyone who feeds professionally on the celebrity business. There’s an integrity to that, as there is in her cool, unexcited approach to playing the daughter of a legend. Who knows where her singing career will take her? It’s the personality, functioning in the media glare, that’s fascinating to watch.