Los Angeles’ Shrine Auditorium is a 6,000+ capacity facility, but you wouldn’t know it from watching the 2003 MTV Movie Awards, held May 31st but only aired by the network last night. The event took place in a vacuum, seeming only to exist inside a right triangle stretching from the top of its elaborate superhero stage, to the back of a 6-deep bay of tables, and across the inevitable commoners’ moat back to stage front. Inside this triangle was the cream of young Hollywood, co-mingling with some music types looking to cross over – Puffy, Pink, and Queen Latifah, who already made the leap. As each “winner” made the short walk from his/her dinner table, through the clawing, outstretched hands of the disease-ridden peasants, and onto the chintzy stage, it seemed as if no one else was in the room besides Stifler, Justin, Kirsten Dunst, and aforementioned Mr. Diddy-bop. A talent show for all the neighborhood kids, thrown by the family with the biggest garage. The bling in this burg might’ve been a bit brighter, but the winners were still walking away with a meaningless piece of plastic. As it turned out, that wasn’t the only cheap thrill of the evening.

After an obligatory opening gag riffing on The Matrix, the summer movie plugs began, interspersed with forced comedy, goofy award themes, and shots of Paris and Nicky Hilton. The Ring‘s Daveigh Chase accepted the Future Hallie Eisenberg award, and represented scary as fuck stage kids everywhere with a frighteningly articulate acceptance speech that lasted two days. Famous gunshot victim 50 Cent performed a medley of “Up in Da Club” and “Wanksta” which according to MTV’s camera crew was only enjoyed by a sashaying Queen Latifah. What, Colin Farrell wasn’t digging it? He can certainly get behind 50’s decision to have sex, not make love. During postgame interviews, types who are down with the rap game – you know, Jessica Simpson, Sean Astin, Allyson Hannigan – gushed about Mr. Cent’s performance. After a few more minutes of award show jibber jabber, Pink performed her new song, fauxhawk in place and licking a butch dancer’s face. “Feel Good Time” was written by Beck (!) and will no doubt be inescapable this summer, as it’s the theme song to the Charlie’s Angels sequel. It’s not a bad jam – Pink has a strong voice, and the song’s bass-heavy underpinnings make her throaty growl even sexier. With the jazzed-up stage antics and crappy sound, it was hard to really get a handle on it, but if Beck’s writing songs for Pink, his long-awaited collaboration with Linda Perry might have finally arrived. 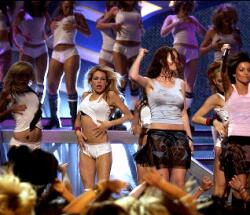 Having failed to ignite America’s passion (or ire) with the initial spit-swapping of “All The Things She Said,” the tawdry Russian twosome took the superhero stage braless and brash, lip-synching furiously to the weak-minded laserbeam pop of “Not Gonna Get Us.” With breathless cut-ins of press clippings on the monitors – “Lock up your daughters”; “girls are doin’ it for themselves” – it seemed as if MTV would only flirt with the duo’s Sapphic marketing ploy. But then, before you could say “Ashton & Demi!”, the Shrine’s aisles filled with hundreds of teenaged girls, done up like schoolgirls and aping the multiple Slim Shady bit from MTV’s award show past. The army of estrogen surrounded its miniature queen bees, gyrating to one of the worst songs to get airtime since Outback Steakhouse started airing radio commercials. It was a bit risqué, but the network still hadn’t done anything more salacious than Colin Farrell’s average night on the town. Hold the phone, Boris. As the mechanized euro-rhythms climaxed, and t.A.T.u.’s principals embraced for a mouth inspection, the schoolgirl outfits started coming off. Hopping about in tighty whiteys and tank tops, the girls started handing jumpers, knee socks, and blouses to the table’d Hollywood guests. Intercuts caught Diddy and Danny Masterson reaching for the fabric; more close-ups found famous types wide-eyed and laughing, mouthing words like “I can’t believe it” and “Oh my!” The camera finally begged off, backing away from the exiting underwear models rapidly, but not too rapidly. If a camera lens was ever self-satisfied, this was that lens.

There was no reason for t.A.T.u. to even be at the Movie Awards. (Of course, the larger issue is why the network even sponsors a movie award show, but that’s neither here nor there). Their girl-on-girl power failed like their manager’s cheap Russian cologne. But what better way for MTV to promote its summer lineup (the return of Tom Green? Come on…) than with two fake lesbians and a bunch of girls in panties? Pay no mind to this snoozer of a party starter.

See Johnny’s article about t.A.Tu., The Year that Junk Broke. Also be sure to check out his coverage of the 2002 MTV Video Music Awards and the 2001 VMAs. He suffers through this shit, so you don’t have to.