Wilco comes home from two years on the road and lots of growing pains. An old-school fan struggles with the new fans who can’t shut their fucking mouths during the show.

When I was in fourth grade my friend Pat Joyce moved away. We’d gone to school together since first grade, which, in the short span of elementary school, is a lifetime. We lived in the same neighborhood, had all the same friends, our parents had similar jobs and cars. But he moved away. I didn’t see him for a while. But then a couple years later, I did see him and he invited me over to his new house—a much larger house, with fantastic new toys and really nice furniture. He had new friends too, and we didn’t get along.

After two years on the road promoting Yankee Hotel Foxtrot, Wilco came home to Chicago with a show at the opulent and exquisite Auditorium Theatre. It was a far cry from those early days at the dingy but beautiful Lounge Ax, where I saw my first Wilco shows, and further proof that you can never really come home again. 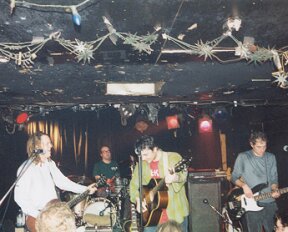 Wilco at the Lounge AxBack in the Lounge Ax days, it was literally shoulder-to-shoulder standing for hours of balls-out rock from the Midwest’s greatest band. You were so close to the action that if you positioned yourself just right on the sides of the room, you could almost literally be on stage when Tweedy and Co. broke into “Casino Queen.” It was a mass of sweat and smoke and bobbing heads and raised beer bottles. There was glass on the floor and piss on the walls. It was the perfect venue to catch the man who would be one of America’s greatest lyricists try out the dopey lines and twisted phrases of his earliest forays into stream of conscious writing backed by the strongest instrumentalists and collaborators in the field. It was the middle days of alt-country and there was still a buzz about that term. Wilco were shepherding in the flock Uncle Tupelo had gathered and it was good.

But the Auditorium Theatre is an altogether different venue. It is posh, ladies and gentleman. But make no mistake, this is not an indictment from a pseudo-punk clinging to the boring aesthetic of trash. No, I like posh. I like comfy chairs and good sound. I like the Auditorium Theatre. But it was still shocking to see a band I used to pay $10 to see twice a month at Lounge Ax in a venue that sells plastic opera glasses to rock fans.

Yes folks, this was their new house and it is huge. The distance from my seat in Balcony 2, Row A completely removed me from the show. Whereas at Lounge Ax members of the crowd were participants, those of us in the upper reaches of the Auditorium Theatre were spectators; as involved in the show going on below us as a Cheesehead is involved in a Packers game. The good news is that Wilco’s new house, in addition to the cozy seats, has an awesome sound system. The sound was impeccable. Truly the best sounding show in a venue that size I’ve ever heard.

But just like my old friend Pat, Wilco too has new friends.

The success of Yankee Hotel Foxtrot, in addition to the massive amount of attention the band has received surrounding the album’s release and subsequent documentary, has brought Wilco a lot of new fans, or at least a lot of curious onlookers. Yes, Wilco has new friends and we don’t get along. 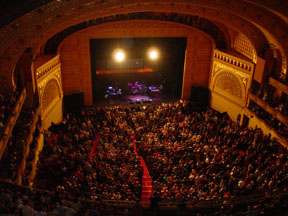 Wilco at the AuditoriumAn increasing fan base is bound to happen when you couple brilliant songwriting with made-for-reality-TV drama, and the last two years have brought a lot of attention Wilco’s way. But the newcomers don’t all share the same enthusiasm and respect or even the sense of community as many OG fans. The din of crowd chatter between songs bordered on ludicrous and was downright rude during opening act Smog’s set. Cell phones, camera flashes, and inane conversations in the seats left those of us unlucky enough not to get floor tickets with a sense of disconnect from a band we’d dedicated years to and a rising resentment of the jackasses who’d bought tickets only to talk through the entire show.

Mind you it’s not Wilco’s fault and who doesn’t want the boys to make some honest, hard earned dough? And this is not meant to further the rift between the hardline alt-country-heads and the newer fans. But we humans fear change and there’s a hard wind blowing at Ye Olde Yankee Hotel.

It’s silly to try to hold on to your favorite bands and hope that the masses never find them. These guys have bills to pay and a successful follow-up to YHF would just add more sticky, stinking egg to the face of the Reprise Records execs who dropped Wilco [David Kahne, to name names – Ed.] for delivering a “career ending” album two years ago.

No, of course we want Wilco to succeed. And they’re still a cool band. That was particularly evident at the after-party where dozens of hardcore fans from the Via Chicago fansite gathered to meet their heroes. Jeff Tweedy’s wife, Sue Miller, personally handed out passes to the Via Chicago members. The band hung out with fans for hours taking countless photos and signing all the strange shit with inside joke associations.

But it was still weird. It wasn’t so long ago—before I moved to Chicago—when I was at my first Lounge Ax show and a scraggily, dreadlocked chap rushed through the crowd and tripped over my leg minutes before the opening act started. I turned to my Chicago host and asked a bit excitedly if it was Jay Bennett to which he replied, “What do you think they are, big stars?” They are now.

Yes, things are changing. While Wilco’s success is confirmation of what the long-timers have always known, we can’t help but shed a tear as our band walks off a stage that is three times larger than the whole of the greatest venue they’d ever played. Good night Wilco. Good night Lounge Ax.