“I don’t like the new ‘punk’ bands you see on MTV now. I don’t think it’s fair to even consider them punk because punk has just as much to do with an attitude as it does about music,” I assert to the man behind me on line waiting to get into the Joey Ramone Birthday Bash at Irving Plaza. I have learned within the last 10 minutes that this man is 40, from the center of England; and has flown to New York for two days only, just enough time to catch the tribute to one of his heroes. He had to coerce Ticketmaster into selling him a ticket to an already sold-out show. He is only one of many fans so dedicated to the legacy of the Ramones that to make such a sacrifice for a small concert isn’t a question. I’ll learn that in less then an hour.

“Yeah, in England we call it ‘bubblegum’.”

“Fitting,” I think to myself, before wondering if the EKG line that flattened upon Joey’s death was also hooked up to the genre he helped birth. Refused and At the Drive-In are the closest thing my generation has to great punk, but both bands have separated before reaching their potential. Is New Found Glory all that’s left?

The 2004 installment of the Joey Ramone Birthday Bash didn’t turn out to be an ideal concert by any means. The bands, for the most part, were local or low-profile national bands not used to playing to a house of a 2,000. And with only enough time for two or three songs, the musicians didn’t have enough time to find a groove before they were ushered off. As a result, the crowd seemed a little disinterested for the early half of the show. I even recognized a number of the videos that were played between sets from Kristy’s article about last year’s show, meaning fans that went to the show last year and again this year were probably disappointed at the lack of variety in Ramones footage. 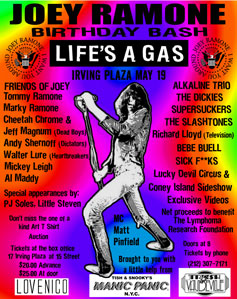 Really, however, this night was about celebrating the life of Joey Ramone and having a good time more then anything else, and everyone who had an opportunity to touch the mic made it a point to thank Joey for the effect he had on them personally—either through personal interaction or just placing a piece of Ramones’ wax on their turntable. Like any repass, everyone congregated to share stories and celebrate a brief but significant life. Richard Lloyd (ex-Television) told a story that involved him going to Joey’s new house for lunch over 20 years ago. While together, Lloyd suggested that the pair write a song together and urged Joey to get his guitar out. When he questioned Joey about the quality of his acoustic guitar (which only had two strings on it), Joey accordingly looked at Lloyd slightly embarrassed and said “I can’t handle writing on anything more.” There he was, a figurehead of the brashest musical movement of all time, being painted as an unsure, awkward kid in a stretched body. He was the classic conflicted character, the bad boy with a heart of gold. This is why Joey was so polarizing, and why you won’t see any birthday bashes for Johnny Rotten. Rotten’s a prick, the total epitome of everything punk music is stereotyped as. Joey Ramone wasn’t fooling anyone—I would have trusted my daughter with him anyday.

The most striking part of the show was the age range of the crowd. There were 16-year-olds in Cure shirts, 40-year-old British men in leather jackets and ripped jeans (OK, maybe just one of those), and 8-year-old boys in grossly oversized shirts that read “R.I.P. Joey.” About 10 feet away from my spot on the balcony, there was a woman no younger then 50 or 60, pumping her fists to every Ramones’ song played between sets, shouting every “Gabba Gabba Hey” as if it were her last. And while I encountered people who came primarily to see other acts, including a 19-year-old girl waiting for Alkaline Trio (e-mail me), each of them expressed to me that they realize their favorite band wouldn’t be a possibility if it weren’t for The Ramones.

What about the bands, you ask? They were OK. The videos were pretty interesting, I guess. And the auction yielded some cool memorabilia. I think, though, that if you advertised a Joey Ramone Birthday Bash and let everyone stand in an empty Irving Plaza with nothing but light, they’d find a way to honor the man accordingly. What this celebration caused was the stark comparison of punk’s roots and where it stands today—and although we can always put on a Ramones record, it hurts to know the only thing fresh in what is still a young movement is bubblegum. For both your music and your unrelentingly kind soul, we miss you, Joey.