Save the Muffin Lady! People from Chicago will already know what this means, but there’s a little old lady who bakes muffins with special, not-so-secret herbal ingredients and sells them at Wicker Park bars for $5. She recently got busted and there was a big article in the Reader about her. So the folks at Q101 and 1974 Inc (who make GLONO’s custom t-shirts, by the way) are selling t-shirts for $10 to raise money for her defense.

Excerpt from the Reader article:

[Muffin Lady, Shirley] Pena, 59, was having a fine night on Friday the 13th of August. Early in the evening she hit a postage-stamp bingo jackpot at Saint Helen’s, winning $500. She spent the next few hours shooting pool at Ten 56, on North Damen, and just after midnight went to deliver 98 muffins—a gift, she says—to a visiting Hollywood film crew she’d befriended in the previous weeks. Driving east on Iowa in her youngest daughter’s Suzuki Sidekick, she hung a right at Wolcott and a squad car lit up and curbed her. She says the patrolmen kept her standing by the car, haranguing her for about 90 minutes and calling her a cunt, among other things. One cop she recognized from a traffic stop years ago briefed his partner on her muffin MO, and they grilled her, she says, to give up her connections.

Pena swears she wasn’t arguing, but she’s a prickly old lady, and it’s easy to imagine her rubbing the boys the wrong way. Though she hasn’t had a valid driver’s license since 1995, she says she gave the cops her real name and was carrying a state ID. When they found another state ID in her purse—one with her picture beside her sister’s maiden name, Beverly Spahos—they read her her rights and called for backup. Pena tried to pass the fake ID off, claiming that she only used it to score free cigarettes from marketers. The cops told her Beverly Spahos had an outstanding larceny charge on her record, and that’s how they were going to book her. At the Wood Street station she was charged with running a stop sign, driving without insurance and with a suspended license, and with possession of $10,560 worth of marijuana—a felony. The police impounded the car, her cue sticks, and her bingo loot along with the muffins.

Pena was amazed—not just because she’d baked the muffins with only about an ounce in the batter, a misdemeanor’s worth, but because she’d thought she was operating under the benign neglect of the 13th District. “They’ve always known it,” she says. “I’ve sold my breads in many police stations and many bars. They’d say something like, ‘If you’ve got any banana-chocolate-chip bread I’ll take some of that, but none of that funny stuff because we have to take piss tests.'” Pena says she stopped selling her straight baked goods at police stations because she got tired of all the ribbing cops would give her about the muffins. 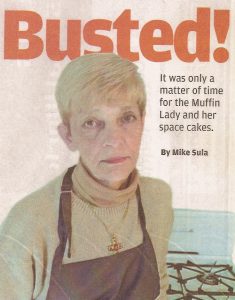 6 thoughts on “Save the Muffin Lady!”