In rush hour traffic on a weekday, Dekalb is two hours west of Chicago. It’s a nice little town where bouncers triple-check your ID, the televisions show both the Sox and the Cubs games, and the karaoke starts at 9:30pm. It’s also where freshly rehabilitated and reconstructed Wilco kicked off their tour to support their new album, A Ghost Is Born.

Glorious Noise had been there the last time Wilco toured on a yet-unreleased album with a newly changed lineup. Things weren’t so great at those first Yankee Hotel Foxtrot shows back in November, 2001. It takes a while for a new band to figure out how to play together, especially with a batch of new, complex material. So no one really knew how this “warm-up” show for Wilco’s current tour with two new band members was going to be.

We needn’t have worried.

From the moment they took the stage to the whining riff of “Ashes of American Flags,” this was a band who had their shit together. They sounded like they had been playing together for years. Guitarist Nels Cline knew exactly when to take control and when to step back and let Jeff Tweedy show off his newfound skills at lead guitar. Together, they tore shit up. In their most boisterous and indulgent instrumental passages, like at the end of “Muzzle of Bees,” they sounded like a noisy Grateful Dead. And that’s not an insult. I was not on drugs, yet at times I felt moved by the sheer ruckus of the sound to an almost transcendent place. They rocked. 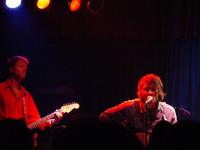 The set was heavy with new material. They played almost the entire new album, avoiding only “Spiders” and “Less Than You Think.” Summerteeth was represented by “She’s a Jar” while the Mermaid Avenue project and Being There were allowed two songs a piece. The rest of the set came from Yankee Hotel Foxtrot. This, of course, didn’t keep people from shouting out for “California Stars.” “That’s your shit,” responded Tweedy playfully before going into the Mermaid Avenue outtake, “When the Roses Bloom Again” and folllowing it with “One by One,” both of which featured nice lap steel augmentation from Cline.

The stuff from A Ghost Is Born painstakingly recreated the sound of the album. It’s a good sound, of course, but it’s always fun to see an artists take material somewhere new when you see them live. Like they did with the acosutic guitar-based version of “Reservations.” Downplaying the piano on this song gave it a whole new feel. And that’s great. If you want it to sound exactly like the record, stay home and listen to the record. Right?

Before the final encore, Tweedy thanked his fans for our support during his recent stint in rehab. “I had a rough time recently and you guys have been amazingly great.” A renowned music fan himself, Tweedy ended the evening with a tender rendition of Wilco’s ultimate ode to fandom, “The Lonely 1,” and we all knew he was singing through us, for us, and about us: “When you perform it’s so intense / When the critics pan I write in your defense / I understand I am just a fan / I’m just a fan.” And never has there been a band that understands the fan-star relationship better than Wilco.

Company in My Back

At Least That’s What You Said

When the Roses Bloom Again

I Am Trying to Break Your Heart

I’m the Man Who Loves You

Wilco is currently streaming A Ghost Is Born from their website. It’ll be officially released on June 22, 2004. If you’ve already downloaded it, you might consider a contribution to Just A Fan.

24 thoughts on “Wilco: A Dream Can Mean Anything”