Best of all, the kid was named Tommy, just like me. I wore glasses at the time and listened to that 8-track loudly on those clunky headphones, so I figured I was already deaf and blind too. But it killed me that my parents couldn’t tell me who sang these songs. Their idea of great music at the time was Makem & Clancy, Helen Reddy, and John Denver. Luckily, Santa knew who sang it, and that Christmas, under the tree was the coolest present a kid could ever ask for: the glorious double album of the original 1969 rock opera, Tommy, in its famous three-panel gatefold sleeve. Sure, I wondered what the hell that big ball on the cover was, and why the guys were inside the ball. Why were they waving their hands? But that was all secondary to the music: two records of the coolest songs I’d ever heard. I was hooked. 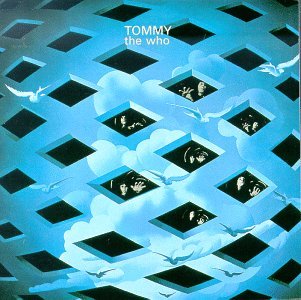 Who needs baseball cards when there’s Who’s Next?

Frankie O’Malley and I hit it off immediately in first grade. We were the only two kids our age who’d even heard of the Who. Later, we found out that Mike Robinson was also a fan. Mike got me The Who By Numbers for my birthday that year, and—actually being a kid—I connected the dots on the cover. I also picked up the “You Better You Bet” 45 and the Face Dances LP. Although I didn’t yet realize that I was coming into the group at the nadir of their career, even then I knew that By Numbers was a far better album than Face Dances.

Some kids spent all their lawn-cutting money on baseball cards, video games, or candy. Not me; I distinctly remember borrowing a copy of Who’s Next from my guitar teacher, loving it, and then saving up to buy it at Rainbow Records. The store opened at 10am on a Saturday, and I was there at 9:45, nose pressed against the glass like a cat eyeing a goldfish. And you know it was worth the wait to crack the shrink-wrap and set the needle into the groove to hear the bubbling synth of “Baba O’Riley.”

That year, the Who toured for their first “final” time. Mike Robinson had the proper pay-per-view channel which was showing the last show of the tour in Toronto. WLUP was simulcasting it as well. Frankie, Mike, and I were all in second grade at that point, and had one hell of a sleepover party to see out the Who’s career (or so we all thought at the time).

When I was in fourth grade, our local library had a copy of Quadrophenia in the stacks. Curious about a Who record I hadn’t heard, I took it out along with my Choose-Your-Own-Adventure and Encyclopedia Brown paperbacks. But then my mom, as only a mom can, decided to take a closer look at the thick libretto. Well, between the big picture of Jimmy the Mod with all the centerfolds on his wall and the drug references in “Cut My Hair,” there was no way she was going to let me listen to the album. After we returned the record to the library without the inserts, my mom had to sheepishly return them once she’d discovered what she’d done. Serves her right.

Once in a while, though, your parents shock the hell out of you. You think you have them pegged, then they throw a fast one your way. In 1989, the Who miraculously reunited to celebrate their 25th anniversary with a tour. They were coming nearby for one show. That Wednesday, I took a long shot and pled my case to my mom that I needed to cut class to buy tickets to see the Who’s reunion concert. In a move that shocks me to this day, she agreed that it would be okay for me to call in sick, so I could buy tickets. Not only that, she drove me to Sears (which had a Ticketron outlet) at 3:45am so I could wait in line. In hindsight, she completely righted the damage done by the Quadrophenia fiasco. When they opened the show with a glorious rendition of the overture from Tommy, I knew I could die a happy man.

Now that I’m a father myself, I’m introducing my infant son early on to the classics; he falls asleep every night to a Beatles lullaby CD made by Jason Falkner. And one of the songs which routinely calms him down is Big Star’s “The Ballad of El Goodo.” Unlike my own pre-Who diet of John Denver and Helen Reddy, I want to give my son an appreciation for the finer things in life. And who knows? The son may take after the father and become a music fanatic. Heaven help us if that happens; Pete Townshend will then be guilty of corrupting two generations of Durkins!