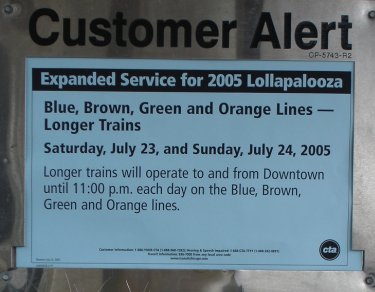 • 12:30 – Saul Williams (Fader) – When the day starts out as strong as this, the rest of the bands have a lot to live up to. I had only heard two of his songs before this (“List of Demands” and “Black Molly”), so I wasn’t sure what to expect. I certainly was not expecting to be as amazed as I was. This was an intense call to arms for everyone to fight together against apathy and get involved to change what’s fucked up in the world from consumerist culture and corrupt politicians to irresponsible rappers. When his cordless mic lost power in the middle of a song, he played it off with grace and humor.

• 1:30 – Kasabian (RCA) – This band gets a lot of shit because they sound like every other britpop band from the past 15 years. That might be true, but can you ever really get enough Mani-inspired bass? For a band whose sound is based in thuggy British laddism, the guys in Kasabian sure seem humble and thankful to be where they are. I don’t think I’ve ever been thanked or blessed so many times in my life. Unfortunately, by the middle of their set, my posse and I were all starting to feel the initial warning signs of heat stroke, so we sought some shelter in the shady area by the portapotties where we could still hear the band. Had to restore our strength for Dinosaur Jr.

• 2:30 – Dinosaur Jr (Merge) – It was cool to see the original lineup of Dinosaur back together again. Anyone who’s read Michael Azerrad’s Our Band Could Be Your Life would never have expected this reunion to happen. J Mascis and Lou Barlow apparently used to really hate each other, but they’ve set those feelings aside now, and thank goodness. They might’ve been the band that ushered in the slacker attitude of the 90s, but the music reminds you why this seemed so appealing and cool at the time. After a few songs, I stopped sweating enough to lower my body temperature and was starting to experience dizziness, headaches, fatigue, and disorientation. Time to get the fuck out of the sun. 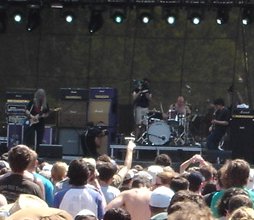 • 3:00-4:30 – Bar Louie’s (Plymouth & Polk) – Air conditioning has never felt better, and ice cubes have never felt more refreshing. A few french fries, chicken strips, and Rum & Cokes later and we were as good as new. I was bummed to have missed the end of Dinosaur’s set, but yo, safety first.

• 4:30 – Ben Kweller (ATO) – I love this kid, and I still listen to 2002’s Sha Sha every couple of months. His live show was good, but by the time we got back, there were already about 15,000 screaming teenaged girls between us and the stage. I probably should’ve taken this as a cue to walk over and watch the Drive-By Truckers instead. But oh well. Kweller and his band were pretty good live, playing a couple songs I didn’t know and then somewhat self-indulgently jamming to close their set.

• 5:30 – Arcade Fire (Merge) – We ended up in a good spot for Arcade Fire. Not super close, but definitely in front of most of the crowd. You’ve got to feel sort of bad for G Love who played opposite them because it seemed like all 30,000 people were there to see the buzz band of the moment. I hadn’t been that impressed with what I’d heard from Funeral—seemed like just another indie band trying to float on the Modest Mouse/Talking Heads trend—but everyone said you have to see them live. They were right. It’s an incredible show with all 30 band members enthusiastically contributing their part. It was exciting, and I’m going to have to go back and give the album another listen. I couldn’t shake the feeling that this was going to end up being the highpoint of Arcade Fire’s career though. It’s well known that the band pulled out of Pitchfork’s Intonation Festival to play Lollapalooza. You gotta get when the gettin’s good, and they can’t really be blamed for that, but as with most bands that attract this much hype, there’s bound to be a backlash. Especially when frontman Win Butler ends the set by walking out into the adoring crowd to allow the peasants a chance to actually touch the hem of their new savior’s garment. Who does he think he is? Bono?

• 6:30 – Spoon (Merge) – I’ve tried to give Spoon a chance. But you’ve got to have really good songs if you’re going to strip down your arrangements as sparse as Spoon does. And from what I’ve heard, they’ve got about two songs that can stand up to that kind of pressure. The rest are just boring and repetitive. 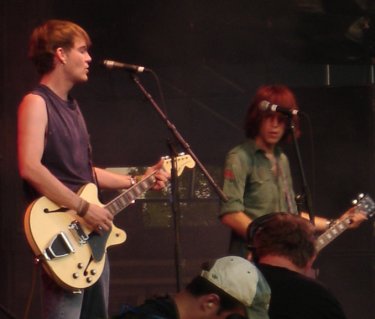 • 7:30 – The Killers (Island) – If I were a corporate executive trying to come up with a band to cash in on the latest trends in alternative rock, I would probably invent the Killers. Their songs are undeniably catchy, so why waste the indier-than-thou hate on them? Who cares? In five years, we’ll all look back at “Somebody Told Me” as fondly as we remember Len’s “Steal My Sunshine” or LFO’s “Summer Girls” today.

• 7:45 – The Dandy Warhols (Capitol) – So we didn’t get a good place up front to see the Dandies. No biggie, most people were either watching the Killers or they’d died from heat stroke by that time. We got there in time to see them finish up “Bohemian Like You,” which is still one of the best songs of that whole neo-psych scene. Oh yeah, I wait tables too. After another poppy song or two, they brought out a couple very special guests to show that a certain recent movie misrepresented their version of reality. Matt Hollywood and Anton Newcombe from the Brian Jonestown massacre came out and they ran through a ragged version of “Oh Lord” with Hollywood on vocal, and then medleyed it into a psychedelic drone jam led by Newcombe and eventually taken over by Courtney Taylor who sort of twisted it into a cover of “What She Said” by the Smiths, chanting, “It took a tattooed boy from Birkenhead,” over and over while the band blissed out and Newcombe set down his guitar and hung out backstage, shaking hands and kissing babies (no shit). It was pretty far out, and seemed genuinely spontaneous. At one point the adorable Zia McCabe looked at Taylor as if to say, “What the fuck is going on?” Taylor responded with a smirk and a shrug, like, “Fuck it. Let’s go with it. Why not?”

It was a pretty great way to end an overwhelmingly exhausting weekend. In an event as corporate and branded and manipulative as anything any marketing genius could ever devise, real rock and roll occasionally smuggled itself past the security check, like the flask of whiskey stuffed down someone’s pants, or the bucket of fried chicken underneath the water bottles in someone’s backpack. It just tastes better when you’re getting away with something.