One of the performers at Solidays was America’s own Patti Smith who, Rynski reports, received the insignia of Commandeur des Arts et des Lettres from France’s Culture Minister Renaud Donnedieu de Vabres on July 10. Sue helpfully translated the insignia as Commander of the Order of Arts and Letters, then broke it down for us by explaining:

There are 3 ranks in the Order: Knight (Chevalier), Officer, and Commander. Only foreigners and certain French members of the Legion of Honor can be named directly Commander, at the Culture Minister’s discretion. Most recipients receive the rank of Knight, and must remain in each rank for at least five years and demonstrate new achievements before being eligible for promotion to the next rank. That Patti was named directly to the highest rank demonstrates the esteem France holds for her oeuvre and accomplishments.

Sue points out, for example, that Iggy Pop is a Knight and Martin Scorcese is an Officer. Clearly, Patti Smith matters in France (certainly more so than she does in the U.S. if you’re talking “official” recognition).

Reporting on the Culture Minister’s remarks during the event, Rynski says that it included a précis of Smith’s life and career, “beginning with her vocation as a writer, her love for and influences from French literature, her contribution to rock music—and especially to women in rock, her family, her social engagement for causes like AIDS and encouraging young people to register to vote.” Rynski reveals, “There was a very emotional moment when the Minister spoke of Patti’s life raising a family in Michigan with husband Fred Smith [“Sonic” Smith of the MC5] and the couple’s creative collaborations.” If there was a culture minister in the U.S. and the name “Fred Smith” came up, the founder of FedEx would undoubtedly come to mind.

He concluded “that Patti is first and foremost a poet laureate.” Mon dieu! As they might say around those parts. Imagine what the Red States consider her to be: she sure as hell isn’t Hallmark. 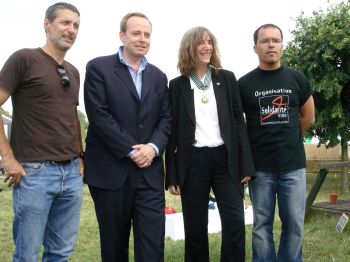 For more of Sue’s amazing photos, check out her gallery at Motor City Music.

12 thoughts on “Patti Smith: A Beacon in the City of Lights”