Please ignore the haters who dismiss you as another affected study-in-cool New York City band. They don’t know you like I do, baby, and they’re just jealous that you have so much style. Don’t listen to the people who show up to your shows and scream for “The Rat” a third of the way through because they’re bored or that’s the only song they know. You can’t help that it’s among the best songs you’ve ever written or the fact that we live in a society where impatience is rewarded. They’ll come around. I think some of them even did that Friday in Milwaukee. 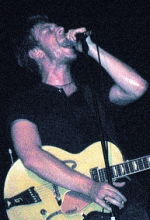 You didn’t say much from the stage, and that’s okay. Not every band has to do stand-up comedy between every song (nothing against bands who are also funny, it’s all love)—sometimes, you just want to play. I know that I said that if your new record—A Hundred Miles Off—were a person, I would ask it to hang out but then act all quiet and weird because I thought it was way too cool for me, but also I would secretly wonder why it was wearing a cowboy hat. But I meant that as a compliment, honestly. And my editor and I were totally joking when we were talking about how the best interview question ever would be “Hey, do you guys have iPods? Because you’re called the Walkmen. That’s funny. Don’t you think that’s funny?” and that was before the Onion asked you to do that iPod shuffle thing anyway.

Basically what I am trying in a haphazard, overzealous, slightly fangirlish way is to say that in a certain sense, you really did save me from myself that Friday at the Miramar, if only for a couple of hours; that I did end up sweaty and full of love for the world at large and all of its guitars and people. I’m trying to say that you were pretty much why people go to see live music. And I can’t thank you enough for that.

See more of Sarah’s photos of the Walkmen at the Miramar Lounge in Milwaukee on June 2, 2006.

Catch the Walkmen on tour:

2 thoughts on “An Open Letter To The Walkmen”