Several Christmases ago, my cousin Mike who was in town for the holiday from Los Angeles told me about his great new job driving people back and forth from Las Vegas. Most of the company’s clients were regular folks, but they were also responsible for transporting James Brown and his entourage. When I heard this, I almost couldn’t believe it.

“So you’ve actually met James Brown?” Indeed he had. Mr. Brown (and everyone called him “Mr. Brown”) even knew my cousin’s name, and had asked him about his family, where he was from, etc. It was a regular gig, driving Mr. Brown between L.A. and Vegas.

I was aware of the rule: When you work for celebrity it is extremely inappropriate and uncool to treat them like a celebrity, and a breech of all working-Hollywood etiquette to ever ask for an autograph. That’s what Midwestern tourists do: not employees.

Nevertheless, I begged Mike to ask him to sign an album for me. I had been seriously getting into funk for a while at that point, and was picking up every James Brown album I could find on vinyl, no matter the condition. My favorite album was Reality, which featured a mustachioed Brown on the cover surrounded by images of the troubled times of 1974: cops, dope, guns. But I didn’t want to have him sign that one because it seemed a little too dark and negative (plus, I wondered how fondly he’d remember that mustache).

So instead I opted for the album with the coolest cover of all. A double album with a gatefold sleeve that folds out vertically to show a full-length Mr. Brown sporting a superbad black and white leather jumpsuit and an unprocessed afro: Get on the Good Foot. It’s the best. My copy was in lousy shape, held together with masking taping and spotted with thirty years of resin and bong water stains. Which was fine with me. I didn’t want Mr. Brown to think I was just some collector scum trying to score something to turn around and sell off. I wanted him to know I was a fan, someone who listened to his music and appreciated it and enjoyed it.

So I gave the record sleeve to my cousin before he flew back to L.A., and although it just a bout killed him to have to do it, he asked Mr. Brown to sign something for his cousin back in Michigan. The Godfather of Soul asked what my name was and signed the album: “My Best To Jake & Family – I Feel Good – James Brown.” 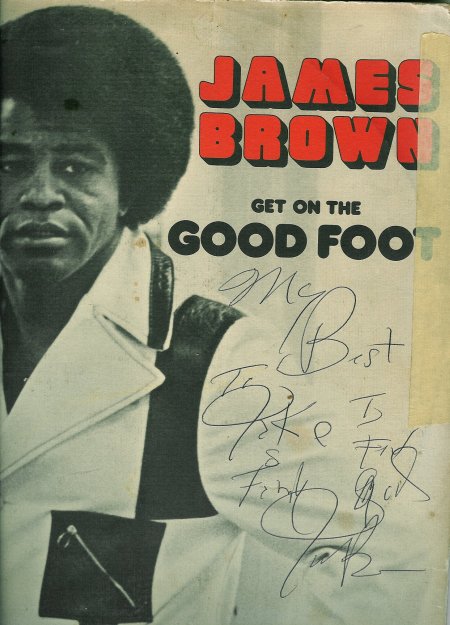 The best Christmas present ever. Several years later, when I gave away my record collection, that was the only album I pulled out and kept.

James Brown died yesterday on Christmas day at the age of 73. He was arguably the most important living person in American music. It’s safe to say that nothing would sound the same today had it not been for James Brown.

Read an amazing 7,000-word article, Being James Brown, by Jonathan Lethem from the Stone back in June. It’s worth your time.

According to the Rap Sample Database, James Brown is the most sampled artist.

One thought on “James Brown, Dead at 73”