Remember how yesterday I said that Jack White offered us free ice cream? I thought he was just joking around and being silly until I got off the train Saturday afternoon and walked by an ice cream van on the way to entrance of Lollapalooza’s second day. The volunteers said it was free, so I nabbed an ice cream sandwich and a Raconteurs sticker. Thanks, Jack!

The ice cream came in handy because it was a muggy-ass day in Chicago. I started sweating the minute I walked through the gates. Day One had been sunny, but breezy. But Day Two was overcast and hotter than balls. I pounded three beers as fast as I could because I knew I’d have to switch to water to survive. And a crowded music festival is no place to be sober—just ask my pregnant wife!

It would’ve been fun to see Be Your Own Pet, Nada Surf, Feist, and the Go! Team, but when you’re trying to spread your energy out over three days, you’ve got to make some sacrifices. And sleeping in, grocery shopping, and a leisurely lunch took precedence over the early afternoon schedule. Especially when it’s muggy out.

• 3:30 – Wolfmother – I’d heard a song and seen a video and sort of enjoyed their Sabbath-meets-Jet deal, but their shtick got old pretty quickly. And their audience was comprised entirely of shirtless, drunk dudes. Not that there’s anything wrong with that. But why put up with it when there’s so much else going on? One reason would’ve been to stick around to see the start of Gnarls Barkley’s set that was up next on the next stage. But it didn’t seem worth it. MP3: Woman (from Wolfmother).

• 4:15 – Calexico – It took a half-hour to get across the park to see their last song. It sounded good. Friends have been trying to convince me to get into this band for a couple years now. Maybe I finally will. MP3: All Systems Red (Acoustic). 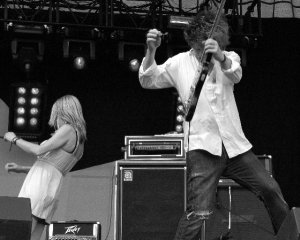 • 4:30 – Sonic Youth – I’d never seen Sonic Youth before, so I was pretty excited. And they didn’t disappoint with their age-defying New York cool. Kim hopped around like a hyperactive schoolgirl in her sundress, while Thurston just stood there tearing up his guitar, looking like a gangly teenager (from the crowd, at least). And it’s awesome that Lee doesn’t dye is salt-and-pepper hair; Sonic Youth subverts the whole concept of age vs. rock. They’re still just so damn cool! MP3: Youth Against Fascism (from Protest Records Vol. 2). 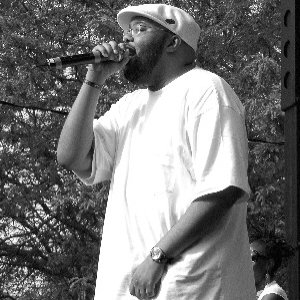 • 5:00 – Blackalicious – I learned from Day One’s Lady Sov experience that there’s no need to actually go over to the hip-hop stage until you can hear the bass. You will hear it, for sure. At this point I suppose I’m expected to point out how overwhelmingly white the Lollapalooza audience is. Well, it is very white. But what can you do? There’s only one thing you can do: you can throw your hands in the air, and wave them like you just don’t care. At least that’s what Blackalicious asked us to do. And we did it. And somehow that played-out hip-hop cliche got transformed into a fantastic celebration of life on this beautiful day. And the sun came out and smiled down upon us all. MP3: Powers (from The Craft).

• 6:00 – Dresden Dolls – I wish Blackalicious could’ve played for another hour, so I wouldn’t have had to experience the worst band I’ve ever seen in my life. Seriously. Remember those two theatre majors in college who thought it was phenomenally witty to loudly lapse into a Monty Python routine during every lunchtime conversation? The Dresden Dolls are like that…but dressed like mimes! And the singer didn’t even have the wherewithal to stay in her polyester dress in the Chicago heat; she had a roadie throw her his black t-shirt and she changed on stage…revealing a glimpse of boob…which might’ve been exciting…if only she didn’t look like a sweaty clown. They had the audacity to close with a cover of the Louvin Brothers’ “Satan is Real,” which is a great song, and probably could’ve been cool if they didn’t just use it as a platform to make fun of Southern televangelists. Really tough target there, Dolls. Ha ha ha, aren’t those hillbillies stewpid? Take a lesson from Marcel Marceau and just shut the fuck up already.

Fetal reaction: A lot of what felt like pounding on the walls to make your neighbor turn the volume down… No kicks. 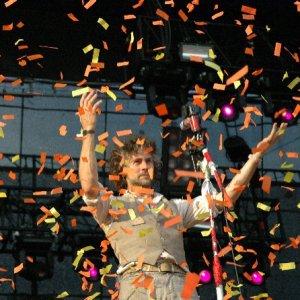 • 6:30 – Flaming Lips – Fortunately, there’s one band who can consistently eradicate the hate in my heart after an experience like the one I suffered through with the Dresden Dolls. The Flaming Lips exude joy. Joy just bursts out of them like paper from a confetti cannon. Referencing Abbie Hoffman’s attempt to levitate the Pentagon, Wayne Coyne begged us all to join together in a big singalong, and maybe the sound of our voices could stop the bombing in the Middle East. I guess I can understand how some people could get annoyed by this kind of thing, but come on. Loosen up, grouchy-pants. If you just want to hear the songs, stay home and listen to the album. A Lips show is our version of church. With the balloons and the streamers, and the Santas and the Martians, there’s a tradition and a ceremony to it. And even though you know what’s coming, you can still be moved. QT: The Yeah Yeah Yeah Song video (from At War with the Mystics).

Near the end the Lips’ set, something very strange happened. My wife and I had moved up close to the stage to get a better look at the craziness. What we saw, if only for a moment, was a vision of the future. We must’ve been transposed to about 2022, because we both saw our teenage son walk by us, oblivious to our presence. The kid looked exactly like a computer-generated composite of our two faces when we were in high school. We both noticed him, but he had no idea who we were. It probably would have been disturbing to him if two adult strangers had grabbed him and told him that this was actually the future and we were really his parents. That’s not something you necessarily want to lay on a teenager. Especially at Lollapalooza. Might be a little too heavy for an outdoor music festival.

Plus, he was probably in a hurry to camp out in front of Kanye. I would’ve joined him there, too, but I’ve already seen Kanye, and besides, back here in 2006 he’s still kicking around inside his mother’s womb, and I needed to get us all home to bed.

Fortunately, GLONO photographer extraordinaire AMP doesn’t require sleep, so he got all up in Kanye’s grill. 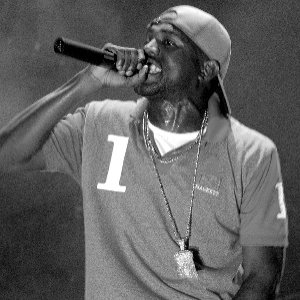 AMP also caught the New Pornographers, whom I decided to skip because I’d seen them once before and their live show bored me to tears.