Low at the Miramar Theatre

You wouldn’t think that Low would attract the type of showgoer who still thinks it’s hilarious to scream “FREEBIRD” during a quiet moment. Yet that’s exactly what happened two-thirds of the way through their set in Milwaukee at the kickoff of their winter tour. Singer Alan Sparhawk took it in stride; he blinked, leaned in close to the microphone and said dryly but firmly, “No.” This provoked a wave of appreciative laughter from a crowd that had clearly been through this one too many times. Seriously, guys, we’ve said it before and we’ll say it again: That joke is not funny anymore. With the exception of Freebird Guy and another guy behind us who felt it necessary to whistle tunelessly along with every song, occasionally mutter some lyrics that had no audible connection with the song that was being played, and at one point jump up to do a strange, disjointed dance while drumming the top of the bar that was set up in the back of the room, the audience was a model of quiet, awed respect. The first several rows even sat cross-legged on the floor to better appreciate their heroes.

Openers His Name Is Alive have traded their tape-loop psychedelia for a more muted, Joni Mitchell Mingus-era feel, complete with a sultry female singer with the demeanor and nervous smirk of a high school art teacher who’s just failed all of her students. Their set included real moments of beauty and power, especially during the saxophone-heavy instrumentals, but this was marred by the impression that they just really didn’t enjoy playing with one another.

Low, on the other hand, brought their trademark intensity-bordering-on-religious-experience to the show, which was the first stop on their first tour since Alan Sparhawk’s well-publicized nervous breakdown in May of 2005. I had been curious about how their new material (from 2005’s The Great Destroyer) would be received live. The Great Destroyer was a fairly divisive album—its transition from Low’s trademark slow tempo and reflective demeanor to a more recognizably rock-infuenced sound angered some longtime fans while making many critics’ best of 2005 lists. As it turns out, the new material was what at least the more vocal fans came to see. When they played the opening chords of “When I Go Deaf” at the end of the set, some members of the audience burst into applause, whereupon Sparhawk sang the first line, paused, and asked the audience “This is what you were cheering for, right? Because this has happened a couple times and we start playing a song they didn’t expect and they look at us like we’re crazy.” 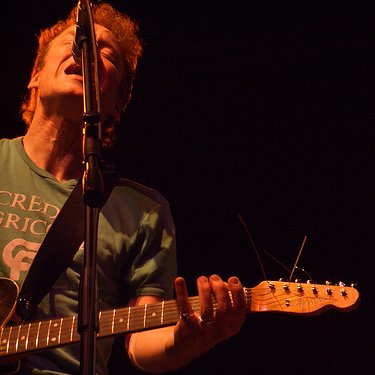 The rest of the set was evenly balanced between old- and new-school Low. “California” (mp3) retained its jangly-sweet, singalong feel, while old favorites “Amazing Grace” and “Murderer” reached menacing heights. The questions that Low’s more religion-themed songs raise feel somehow more prescient in today’s political atmosphere than ever before. They were relaxed and witty between songs, and despite one or two false (electric! How strange!) guitar starts and rueful glances between band members it was impossible to tell that this was their first stop on their current tour. The new material lost a bit of intensity without the recorded presence of the drums, which was so strong that it felt like an additional member of the band. But those voices—those voices! As singers, Alan Sparhawk and drummer/vocalist Mimi Parker have two of the most well-blended and powerful voices on the planet, and their combined transformative powers are enough to make the onlooker feel like they’re at some sort of revival.

It’s been reported that “Monkey” (mp3), off The Great Destroyer, is a song about the band wanting to cast off their slow-core acoustic sound, with the “monkey” functioning as a metaphor for the old sound (“Tonight you will be mine / tonight the monkey dies”). While the monkey isn’t quite dead, it’s been imbued with a greater intensity and sense of fury that isn’t seen often in Low’s live repertoire. Any worries that longtime fans may have had about the band’s mental state were put to rest with this show. The kids are going to be all right.