Talk about out-of-character—Torquil Campbell taking a break in the middle of Stars’ Webster Hall set to introduce “He Lied About Death” with the joke du jour, something about Dick Cheney’s terrible aim. Yawn.

Out-of-character because politics have never been Stars’ specialty—they would much rather have you feel than think, their songs adorned with themes of tragic romanticism, whimsy, and despair. It’s an angle that has gained the Montreal-by-way-of-New York group a reasonable degree of success. They wear their hearts on their sleeves in the most un-ironic of ways, and the many smitten youngsters showed their appreciation on this night. Even the most cynical music fans have to feel weakened by the sugary kiss of Stars’ material. The band, who put even Belle & Sebastian to shame when it comes to twee, are great songwriters, and their cinematic brand of electro-pop translates well to the stage, despite the intricate sonic stew.

Campbell, once the group’s weakest link, now comes across as the obvious ringleader, directing the band’s other members, singing with a genuine avalanche of emotion, and embracing the crowd with lots of charming banter (hunting jokes aside). Heart and Set Yourself On Fire were represented equally, and though the group’s best songs were unfortunately the most docile of the night, underdogs like “The Life Effect” and “Reunion” were smooth and earnest. 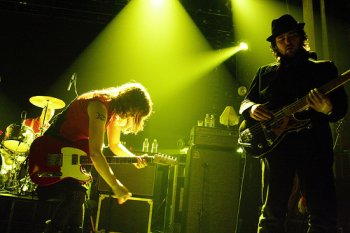 The band did well appeasing fans with their bounciest, most fun material and their epic ballads, pulling tricks like following “What I’m Trying To Say” with the poignant “One More Night.” “Calendar Girl,” the set’s closer, retained the recorded version’s earthiness, giving the crowd of young romantics their new MySpace mantra: “January, February, March, April, May—I’m Alive.”

Stars connects emotionally because the music plays like the soundtrack to a perfect dramatic love story, and listening to it makes our own lives seem more cinematic. Before parting, Campbell provided “something for your dreams, because your dreams are entirely your own,” sticking around for a gentle finale with only piano accompaniment. For those in the midst of teenage drama, Stars may seem life-altering. For all the college grads in the crowd, the group helped us realize that though we may look back at our adolescence with embarrassed naivety, emotion trumps skepticism.

Photos by Steve McFarland (licensed under a Creative Commons BY-SA 2.0 license). See more of Steve’s photos from this show. If you haven’t heard Stars, you can download “Ageless Beauty” via their label, Arts and Crafts, and “On Peak Hill” via Insound.

One thought on “Stars: More Songs About Love and Sex”