The Libertines energized British popular music with their debut Up the Bracket in 2002. Their combination of pop sensibilities and punk ethics with just a dash of fantasized English nationalism, galvanized the entire British Isles who longed for an answer to the Strokes. And the answer was so much wittier, musical, and COOL. But what really set the band apart was the combustible relationship of its two songwriters.

Carl Barat and Pete Doherty were a joined force. More than songwriting partners or co-leaders of the New Cool, they shared an ideology and romanticism for rock and roll, and what it was to be English in post-laddist Britain. They shared a heritage with so many great duos before them, yet they carved their own niche and established their own code. They were good looking like Paul and John, but far removed from the polite niceties that established the Beatles as household names a generation and a half before. They were dangerous like Mick and Keith, but avoided the chameleon change-ups that have painted Sir Mick as a tired old man chasing younger audiences into his 60s. They were witty and British like Morrissey and Marr without the politics, preaching or morbidity that has (unfairly) cast Mozzer as the voice of depression for nigh on 25 years. They shared the same spirit and punk ethic as Mick and Joe without the overt politics or the drug addled triple album to sully their legacy. They were brothers who hurt those closest to them like the Gallaghers without the convenience of a blood relationship and none of the gassy boasting that has undermined the pop brilliance of Oasis for so many casual fans who see them as nothing more than another English hype story.

The Libertines were brilliant and new. And then they were gone…

In the two years since Pete Doherty was permanently sacked from the Libertines, both he and Barat have endured the searing spotlight of tabloid fame in England, survived personal drama—Doherty’s by way of increasingly disturbing drug behavior; Barat’s in the form of a tumor behind his ear—and released their first albums apart.

Jake’s already voiced his concerns regarding the production of Doherty’s Babyshambles debut, Down in Albion. It really is the producer’s role to pull out the best in an artist and to act as the first filter of shit. Neil Young had David Briggs (and look at the quality control since Briggs’ death). Ryan Adams has Ethan Johns (imagine what he’d put out without a producer!). The Stones had Jimmy Miller (who they wore out and nearly killed but got Exile on Main Street in the process). A good producer can help an artist see beyond his own two eyes and shape good music into great pieces of art. Mick Jones failed Pete Doherty in that respect, but there are some bits of gold among the fistful of pennies.

Doherty’s ode to nihilistic abandon, “Fuck Forever,” will rank as one of the greatest British singles in due time. It’s a riotous salute to the idea of “NOW” and a call to chuck it all. And like so many great pop songs, it’s not just simple melody and clever turns of phrase, but an ironic bit of wisdom in his own observation that “I’m so clever, but clever’s not wise.” 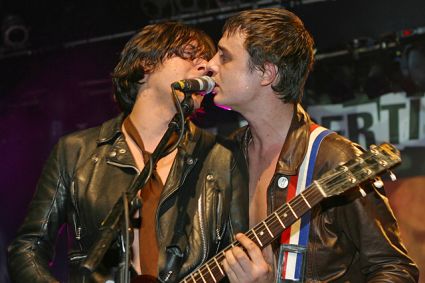 Equally exciting, but not as brilliant, is the lead-off single “Killamangiro,” which touches oh so tenderly on the trappings of fame and the pressures of stardom. A bit overwrought in the chorus that asks “Why would you pay to see me in a cage which some men call a stage?” but still a fantastic mix of stomp and circumstance that no true rock fan can deny.

“Pipedown,” “Sticks and Stones,” “8 Dead Boys,” and “Back from the Dead” are all fantastic pieces of messy pop brilliance. Leaning more on those clever turns of phrase but still fist pumpingly excellent.

Of course, not all of Albion is brilliant. It contains a couple of doosie losers, including the unlistenable “Pentonville” and the lame reworking of what was a lovely acoustic demo called “Albion.”

Even with the lows, what really kills the album is the mediocrity. Half-baked ballads like “In Love with a Feeling” or the failed answer to his own previous Libertines brilliance with “What Katie Did Next” leave Doherty sounding washed up at 26 years old.

Taking a slower tact and concentrating on getting his head together (literally in the case of the previously mentioned tumor), Carl Barat retreated to the countryside and worked out what the end of the Libertines meant. He’s repeatedly publicly mourned the loss of his band and the relationship with Doherty he clearly still holds dear. August 15 will see the American release of the fruits of his time with Waterloo to Anywhere with his new group Dirty Pretty Things, featuring most of the Libertines except Doherty, including Pete’s American touring replacement. 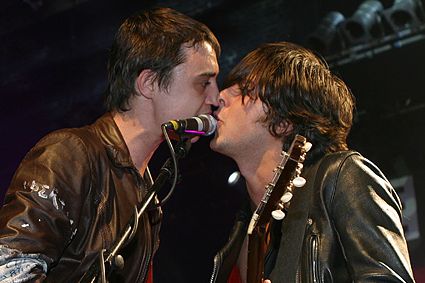 Barat is still an idealist. Despite the treacherous road his former band took and the loss of his soul mate, Barat still believes in the romantic philosophy he and Doherty created and lived. That comes through in the songs of Waterloo.

A more even piece than Albion, Barat still flashes that skid row crooner cool and has his own bits of brilliance on “Deadwood,” “Doctors and Dealers,” and “Bang Bang Your Dead.” For those paying attention, those are the first three tracks of the album and illustrate how Barat has fallen into the all too common habit of front loading an album. Mind you, there are still some great pieces later in the album, but the band is clearly coming out of the shoots with their best foot forward.

But where Doherty was disserviced by lazy production, Barat is supported by tight (without being uptight) engineering and a more discernible ear for songs by producer Dave Sardy, who paid his dues with Oasis.

Barat delivers his own set of sloppy goodness with “If You Love a Woman” and “You Fucking Love It” but then falls right into full-on Elvis homage with album closer, “B.U.R.M.A” It sounds corny as hell but it works.

What Barat is lacking, of course, is the playful back and forth he had with Doherty on classic Libertines recordings like “Can’t Stand Me Now” and “What Became of the Likely Lads?” It was their verbal and musical bouncing off each other that set the Libertines apart from any British band of recent memory. Unlike the Gallaghers, Carl and Pete did not trade in loutish behavior or drunken punch ups. Sure, Pete robbed Carl’s flat and went to the Pen, but they’ve never slagged each other in the press or belittled the relationship that defined them.

Like the duos listed above, Doherty and Barat alone will likely never be rated without comparison to the other. As artists, that must be frustrating. But hopefully they realize how special their relationship was to other people and how the music they wrote inspired teenagers everywhere to pick up guitars and draft their own manifestos. Most of them will abandon those ideals when college or real jobs come knocking, but a precious few will become poets and writers and painters and yes, rock stars. And that is what will become of the likely lads.

Amazing Libertines photos by Andrew Kendall. More. Previously: “Re: Babyshambles (An Open Letter to Mick Jones)” from April 2006, and “The Libertines: Wet Work” from August 2003.

13 thoughts on “What Became of the Likely Lads?”