I’ve gone to the Pitchfork Music Festival each year since its inception, including the first year when it wasn’t actually called the Pitchfork Music Festival. But I’d never requested a press pass because I didn’t feel like having to write about it. When you request free tickets, you’re obligated. And sometimes it’s nice to just hang out with some friends, listen to a some music, and observe Hipster Youth in their native habitat.

Plus, it’s fucking Pitchfork—who wants to ask those guys for anything?

This year, though, we needed that photo pass to get those nice, close shots. So I swallowed my pride and got hooked up with a media pass for myself and a photo pass for my man, AMP. But I still wanted to have a nice weekend and enjoy myself, so I made a conscious decision to follow Wayne Coyne’s advice and try not to be too uptight about it. I mostly succeeded.

I made it to Union Park close to the end of Slint’s set. I’d never heard Slint, but someone told me they were good. Slint was supposedly very influential on current indie rock. Judging from what I caught of their set on Friday night, they must be responsible for all the boring elements. Slow, plodding songs that went nowhere. I was bored and thirsty. 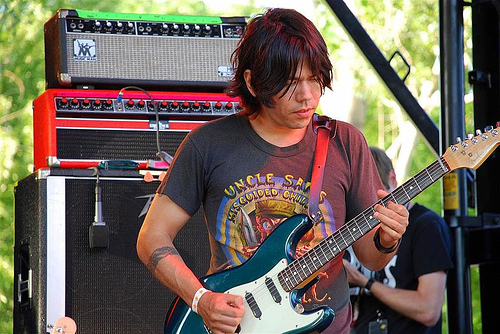 Made my way to the beer lines and they were all way too long. That’s the thing about a Friday night show: everybody wants to get shitfaced. Which is fine, I suppose, except it makes the beer lines way too long. I walked all over the park trying to find the press tent where they were supposed to have free water and the internet, but I never found it. I actually don’t think it was there Friday night, but I’m not sure.

Friday night was a little different too because press was allowed in the VIP area. At least they didn’t stop us when we went back there. A VIP is anyone who’s ever written anything for Pitchfork, which excludes me and includes approximately one-third of each day’s 17,000 attendees. They get their own portapotties and beer line and Chipotle.

I’d given up on finding getting something to drink by the time GZA started. Friday night was the All Tomorrow’s Parties deal where each band performs their classic album all the way through. GZA’s classic album is Liquid Swords, which I downloaded the day before and listened to once. Earlier in the week, thinking I was being all prepared, I downloaded Legend of the Liquid Sword, but that turned out to be the wrong album. Doh.

See, I had stopped paying attention to new hip-hop by the time Liquid Swords was released in 1995. That’s the time I was all into Wilco and Son Volt and Neil Young and the Sonics and Weezer. I pretty much stopped following hip-hop once copyright laws abolished heavy sampling. People tell me I missed some good stuff, including the Wu-Tang Clan. 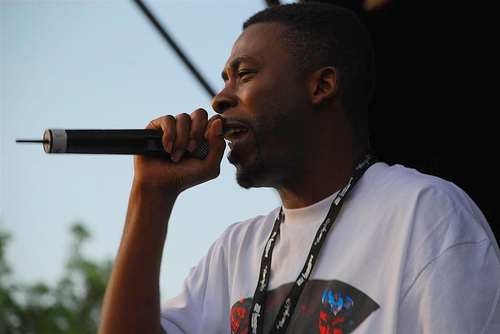 The GZA had his people come out and tell us to throw our hands in the air. Some people did. Then GZA came out and did some songs that sounded vaguely familiar, but what do I know? People around me were saying that he strayed from the ATP format by the second song of his set, which apparently was not the second song on Liquid Swords. Half of the people around me thought this was hilarious and rebellious, and the other half thought it was stupid and annoying. I have no opinion. It sounded like good, live hip-hop to me. Not that I was going to throw my hands in the air or anything.

I wonder about this though. Why is acceptable for GZA not to perform his album like he was supposed to do? Like he was hired to do? Then again, isn’t it embarrassingly academic to even ask an artist to play the exact setlist you want to hear, even if it is something interesting like an old album? Maybe it was because the rest of the Wu-Tang Clan was playing a show that same night at the Paradiso in Amsterdam, and so many songs on Liquid Swords showcase those other dudes… How could he even do those songs without those guys?

I know a lot of people were hoping the rest of the Wu was going to show up unannounced—until GZA pointed out the Amsterdam thing. Then they were just disappointed. I wonder if the organizers were hoping the same thing. How cheap can you get the GZA as opposed to the entire Clan?

I got ditched for Sonic Youth. It wasn’t crowded where we had been standing, way in the back. So my pals went on a beer run, and I was going to hold our place. But before the band even started, the crowd got more and more dense. To the point where there was no way in hell that I was going to get my beer. Or see those guys again.

As the band kicked into “Teenage Riot” I noticed it just wasn’t loud enough. Some other people noticed too, and the one guy at the entire show with a non-ironic moustache was heckling the band: “Turn it up!” How do I know his moustache was not ironic? Because he was heckling Sonic fucking Youth, man. And he was wearing a muscle shirt and shorts. Diverse crowd, for real. 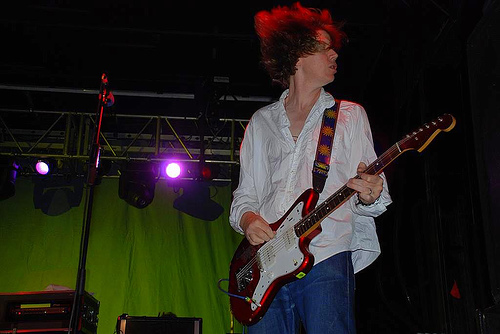 Everybody knows that if it’s not loud enough, all you gotta do is get closer to the speakers. So that’s what I did. I got a text from AMP that read, “Meet at the apex of the two monitors.” It took me several minutes to even figure out what he meant by “monitors,” and after that I was still left trying to remember what the fuck an apex was. Miraculously, I found him. Right at the apex of the two monitors. Amazing.

But Sonic Youth was awesome. They’re old enough to have a daughter who rocks, but they’ve still got it. When they’re on stage, they still look young. And more importantly, they still sound young. And Daydream Nation is a great album. There are plenty of albums that everybody says are super important, but they’re just no fun to listen to. (I would imagine the Slint album falls into this category.) But Daydream Nation is a great rock and roll album. If you’re turned off by the noisiness of Sonic Youth’s early stuff, and annoyed and/or bored by the New Age tendencies of their Jim O’Rourke-influenced later stuff, you should check out Daydream Nation. It rocks.

And it was great live too, almost twenty years later. To think about what an accomplishment this really is, imagine the Beatles getting back together to perform Revolver live in 1986. Think about how terrible their hair and clothes were in 1986, not to mention their guitar tones and drum sounds, and you’ll realize how awful it would’ve been. Even if John was alive, it would’ve been dreadful. Sonic Youth, on the other hand, sounded awesome.

I hope Thurston and Kim’s kids get pregnant soon, so that Sonic Youth can be the world’s coolest grandparents. That’ll make me feel a bit less old.

After the show, we watched Meatballs on AMP’s HDTV. I would see the same wardrobe from that 1979 film being worn by a solid 10% of Saturday’s festival crowd. Kids are starving in China and you’re walking around with a sombrero full of peanuts. Alright, virgins to the left, non-virgins to the right. You guys split ’em up however you want…

What? Oh. Anyway, I did not intend this to go on so long. Jesus, I wanted to wrap this fucker up in one piece, but it looks like we’re going to have to spread it out over a couple. Stay tuned: I haven’t even mentioned the weather yet! Hardly talked about the fashion. Coming soon: Iron and Wine, Yoko Ono, Stephen Malkmus, Of Montreal, and the New Maximographers. 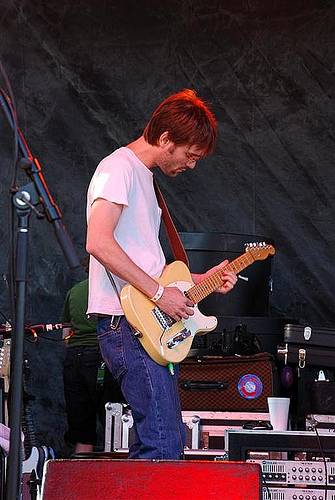 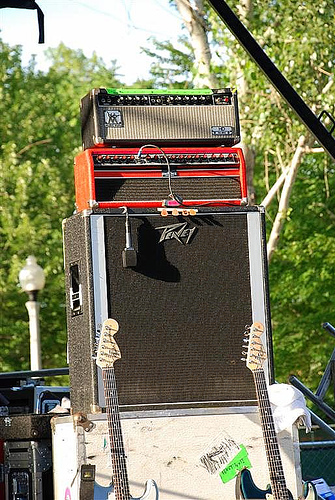 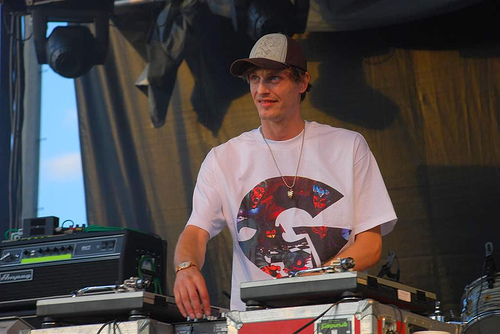 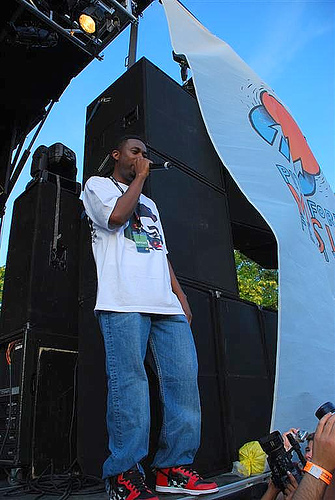 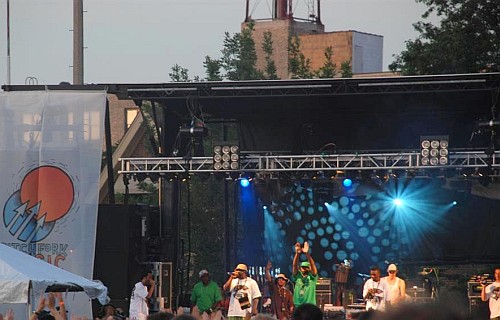 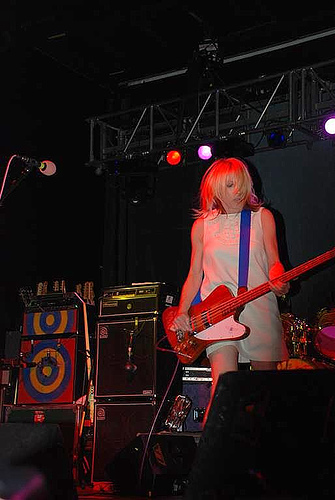 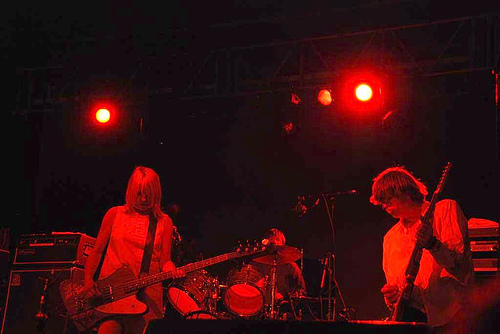 All photos by Alan M. Paterson. See more even of AMP’s Pitchfork photos here and here. Read the Days 2-3 wrap-up, too.