Saturday was a beautiful summer day. The temperature was warm and sunny with scattered clouds and no humidity. Unlike previous years where the weather could actually kill you, this year was mild and nice. Perfect drinking weather.

I would’ve like to have seen Califone, but there was no way in hell I was going down there at 1:30. I’m a grown up; I have things to do, like go to the doggy pharmacist to pick up painkillers for my wiener. Besides, getting there early would’ve forced me to listen to Battles, and that surely would’ve wrecked my great mood. 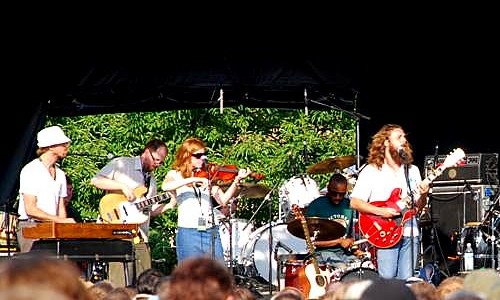 I arrived in the middle of Iron and Wine, whose Sam Beam was thankfully still rocking the Grizzly Adams look (not to be confused with Grizzly Bear, who played a couple hours earlier on the same stage). The new songs sounded good, if a little more on the World Music tip than I’d prefer. Sadly, just like at last year’s Lollapalooza, Iron and Wine was once again too quiet to drown out the beats from the side stage.

There’s a relatively simple solution to this problem: turn it the fuck up. You could also put the quiet bands like Iron and Wine on the stage farthest away from the side stage, I suppose. But I have yet to attend an outdoor festival event where the sound isn’t shitty. Doesn’t it seem like some acoustics engineer ought to be able to solve this problem?

Then again, Mastodon didn’t seem to have any difficulties being heard. I drank and talked to pals during their set, and even from the other side of the park, you could tell they were loud and ridiculous. Good for them. But it’s got to be the kiss of death for a metal band to be “approved” by the hipster set. It would’ve been fun to see some real knuckledragging metal fans show up and beat the shit out of the indie wimps in the crowd and scare their girlfriends. Or maybe not. 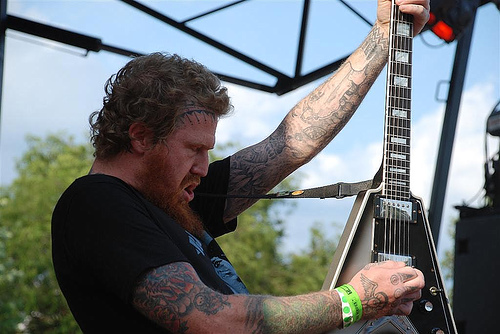 Not to suggest that everyone in the crowd was a 98-pound kid with a white belt. In fact, while I was waiting for Clipse to start, a couple of d-bags in pastel polo shirts pushed their way in front of me to talk about their golf swing for twenty minutes. No shit. The discussion centered around whether Tiger would even need his irons on a certain course, since he is able to go 296 yards with a pitching wedge (or something). And how Tiger’s “C” game is enough to win most masters tournaments, but when he brings his “A” game, he’s absolutely unstoppable.

I eventually couldn’t take it anymore, so I sacrificed my good spot to get the fuck away from those guys. Not to be a snob, but is there any way they can screen for people like that at the gates? I can put up with lots of sports talk, and even participate in some of it, but that was too much. 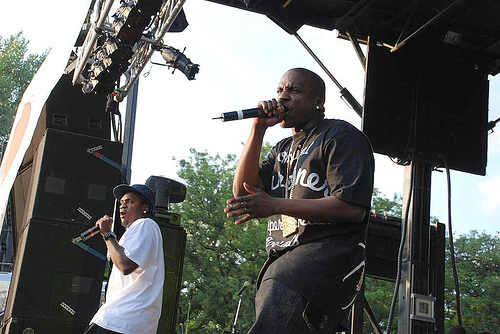 Cat Power put on a decent show, but they suffered from lack of volume. Some stuff just isn’t right outside in the daylight, and no matter how many Chanel ads she models for or diamond ads she sings on, Chan Marshall does not belong in the sun. She didn’t melt down or freak out or anything, but she prowled around the stage like a schizophrenic. At least that’s what my wife said, and she’s a psychotherapist.

Nevertheless, Marshall’s voice sounded great and it was cool to see Blues Explosion’s Judah Bauer in action again. It’s been a while. 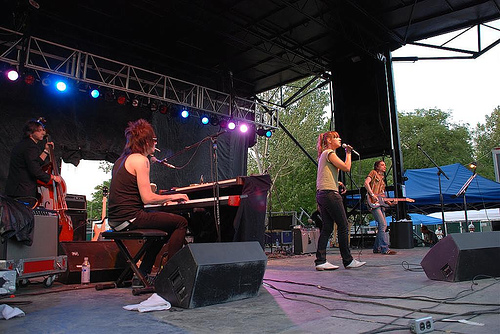 I wanted to check out Girl Talk, but the side stage was too crowded to get in with kids dangling from fences and trees. What is this, monkey time at the zoo?

Finally, it was the moment I’d been waiting for: Yoko Ono. I, like most Beatle fans, have spent plenty of negative energy hating that woman for her role in the Beatles’ demise. But as I’ve grown up, I’ve realized a couple of things about her. One, John Lennon was batshit crazy in love with her. And two, she is a very cool artist. As far as avant-garde (French for “bullshit”) is concerned, Yoko’s stuff has always been playful and positive. And that’s nice.

As for her music, well, while I might not have it on constant repeat on my iPod, I’ve come to really appreciate it and respect her for being so fucking freaky at a time when people were still shocked by backwards guitar solos. Yoko’s music made Jimi Hendrix seem conventional. Yoko made Frank Zappa sound like the Monkees. Yoko made weird-ass music, and I think that’s cool. Especially for a woman.

Yoko exposed a lot of ugly sexism and blatant racism in many otherwise tolerant people. She still does. And I love her for that. And I also love her because she’s kooky. They passed out little flashlights before her set and showed an instructional video (copyright 2005) that taught us how to bring about world peace (or something like that) by blinking an “I love you” code with our flashlights. Scoff if you must, but it’s way more fun to just smile and enjoy the spectacle.

She’s 74 years old, you know. That’s really old, no matter how you look at it. And when she goes on stage and does her “oy yoy yoy yoy yoy” howly thing, you can’t help but admire the fact that she’s still freaking people out. She was causing a reaction from people who claim to like Deerhoof. Dipshits who willingly listen to Battles were running away from her in disgust. That’s an incredible effect for any artist these days, but for a 74-year-old tiny little Japanese lady, it’s fucking amazing! Yoko’s a badass. 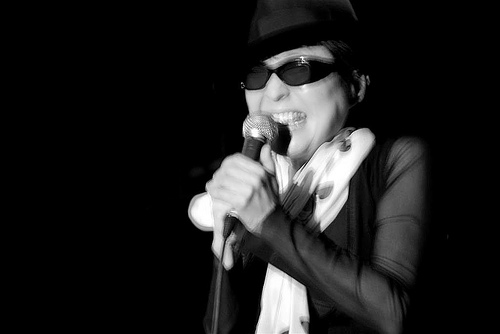 She played the almost 40-year-old “Don’t Worry, Kyoko,” and it still sounded interesting and topical. She did a touching song called “I Miss You” and from that went immediately into “Walking on Thin Ice,” the song she and John were working on the night he was killed. She brought out Thurston Moore and the two of them made a hell of a racket.

As great as it was, and it really was great, there’s only so much of it you can take in one sitting, so we left before the end. Yoko was still howling and screaming and freaking people out as we walked out the gates and up Ashland Avenue.

And just as there’s only so much Yoko you can take, there’s also only so much outdoor festival you can take. I slept in, went grocery shopping, and took my time getting back to Union Park on Sunday. I made it in time to get a good spot and catch the beginning of Stephen Malkmus’ solo acoustic set. He mixed some classic Pavement songs with his solo stuff, and mostly avoided everybody’s favorite songs (“Cut Your Hair,” “Range Life,” “Jenny and the Ess-Dog”), but he did play “Spit on a Stranger.” 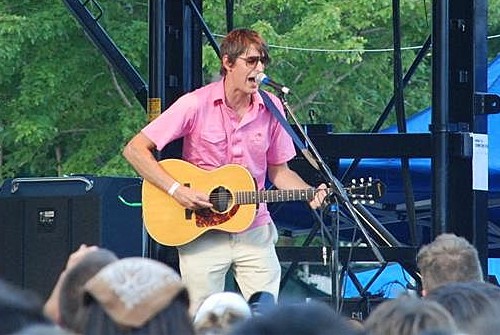 He looked exactly like those golf dudes I was bitching about on Saturday. Pink shirt, nice tan, Aviators, clean hair, the whole bit. You’d just want to punch him if you saw him on the street. But up there with just his guitar (and occasionally a drummer), he seemed like an almost regular guy. Not the indie rock god that is his legacy. But just a singer-songwriter playing his songs and shooting the shit about the beautiful weather. “Now that’s something we can all agree on.”

Another thing we can all agree on is that Of Montreal has put its Outback money to good use by investing it in fantastic costumes for the band and stagehands. There were shoulder pads, g-strings, scary masks, Victoria’s Secret angel wings, football helmets, aliens, and glitter galore. The funny thing is that I saw Kevin Barnes walking through the crowd the day before, carrying his adorable daughter, before the Yoko show, and the dude was wearing his glittery face makeup and those same crazy white pants. That gear is homey’s street clothes! 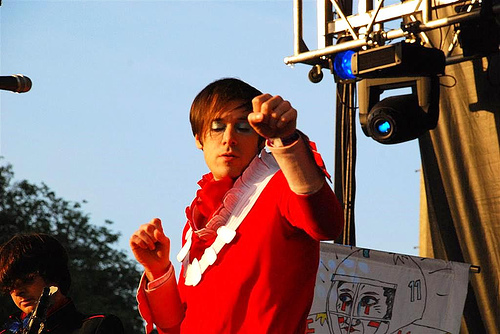 All of which would be pointless had he not continued to write better and better songs. Of Montreal is becoming a really good band, and I hope the wackiness of their stage show doesn’t undermine the quality of their songs. The encore of “All Day and All of the Night” was classic.

You know what’s not classic? When a band repeatedly tours without all of its members. This is the second time I’ve seen the “New Pornographers” without Neko Case or Dan Bejar. It’s not the whole band when it’s missing the two most interesting people in the group! It’s like looking at girly magazines without the nudity. That’s why I call them the New Maximographers when they tour without Case or Bejar.

I’m sure that red-haired guy is perfectly nice and funny, but he needs to stop touring as the New Pornographers when it’s just him and some random Canadians. Get your own band! Everybody else has one.

As I was leaving, I noticed they were playing “We Will Rock You” or some other Queen song that I’m sure was perfectly hilarious if you still think that irony is funny. Well, at least they were loud. 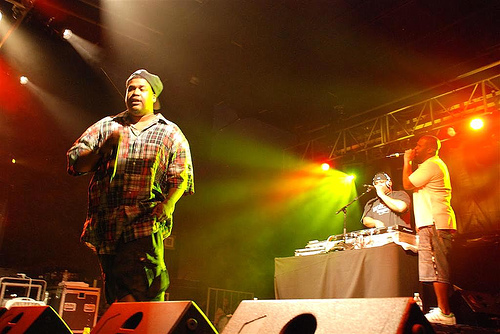 My man AMP stuck around for De La Soul and said they were good. I was already home in bed by the time they went on (not really). I made it through the whole weekend without getting sunburned, getting too wasted, or getting in trouble. But I still had fun. I’d have had more fun and been able to see more bands if not for the strict no re-entry policy. But then I probably also would’ve gotten sunburned, gotten too wasted, and gotten in trouble.

Hopefully next year the weather’s as nice as it was this year, and they figure out the sound problems, ditch the re-entry policy, and maybe even finally book Neutral Milk Hotel. 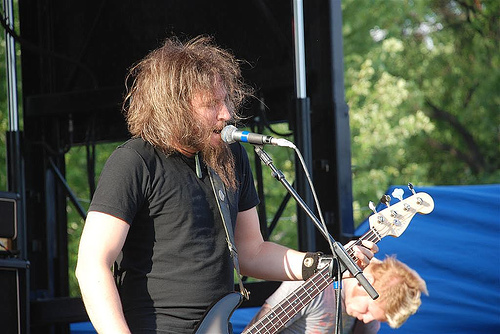 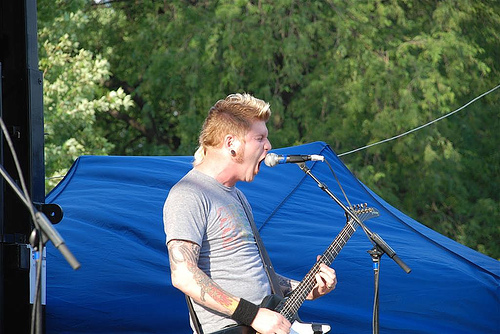 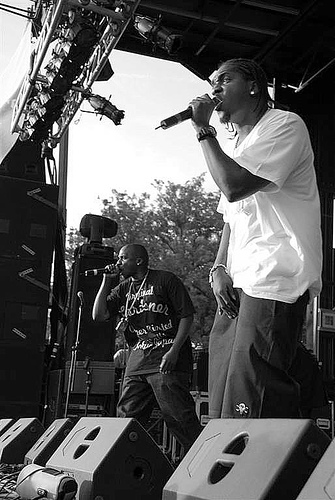 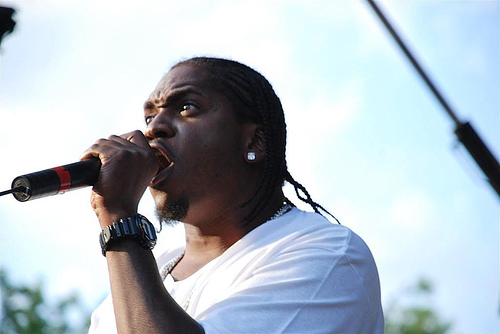 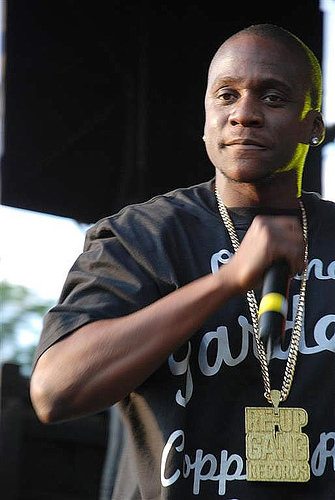 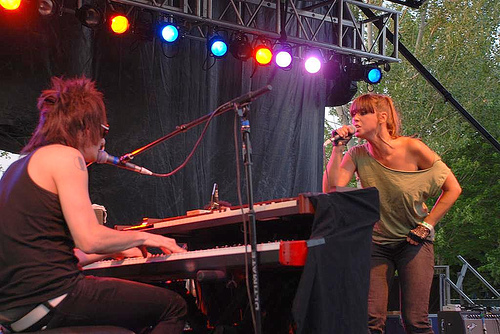 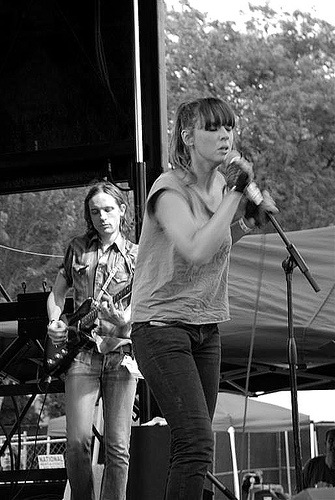 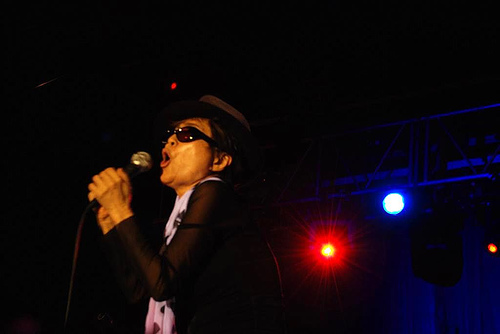 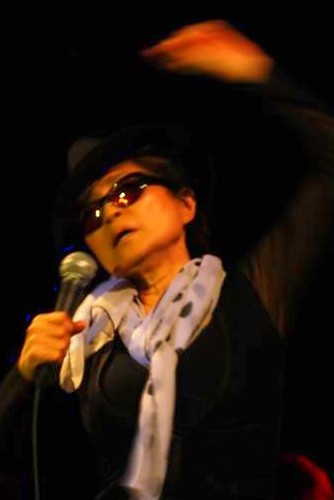 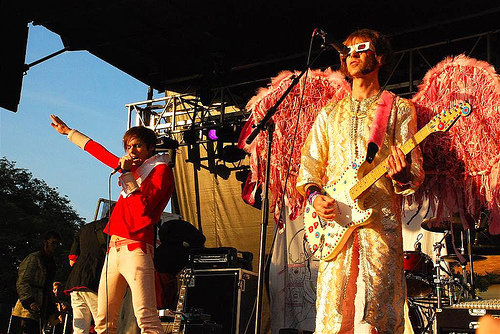 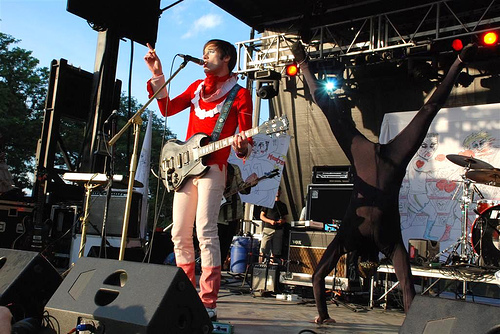 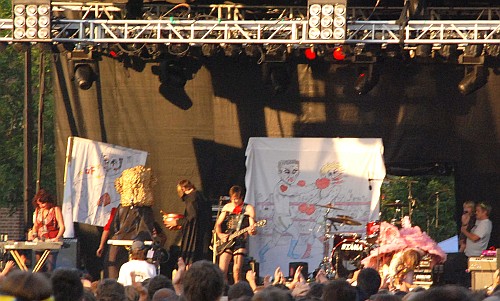 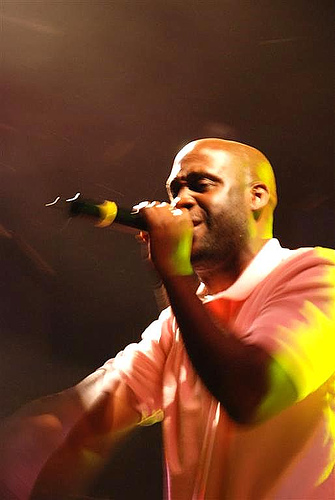 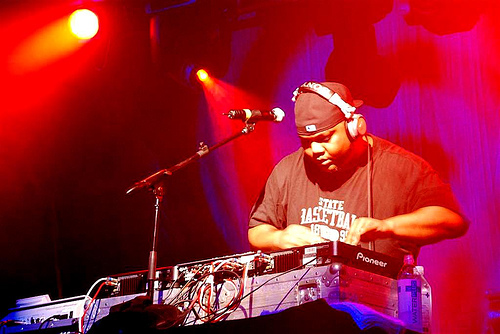 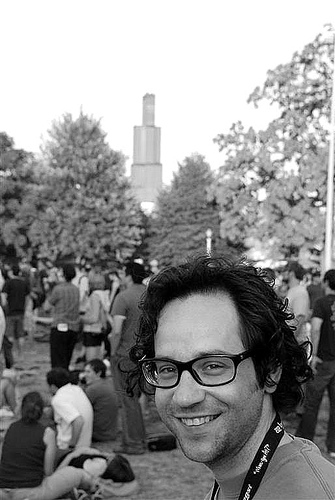 See you at Lollapalooza in a couple weeks!

All photos by Alan M. Paterson. See more even of AMP’s Pitchfork photos here and here. Read the Day One wrap-up, too.