My fascination with modern bands reproducing vintage sounds started in the early 90s when a couple Kalamazoo bands from the Leppotone label started donning sharp suits and banging out sounds that could have emanated from any Seattle-area garage in 1966. It was to my great surprise to learn months later that there was a whole subculture of garage rockers out there who were still living in the Johnson years and searching out wingtip shoes to accompany their sharkskin suits. This was before Swingers, mind you, and it was cool as all get out.

More than just quirky recording projects, these bands lived a sort of performance art. It wasn’t enough just to sound like the Sonics or the Living End, you had to believe it and immerse yourself in the sights and sounds of the period or else the entire fantasy fell apart like Christopher Reeve when he found that penny in his pocket and was whisked away from the turn on the century on Mackinac Island and back to the shitty early 80s. The movie is called Somewhere in Time. Rent it. And then wash off the honkeyness with a sweet taste of Sharon Jones and The Dap-Kings.

The Dap-Kings are cut from the same cloth. While I admit to being a sucker for a band with good stage presentation, looks only go so far. The Dap-Kings fill those suits with soul. Led by bassist Bosco Mann, the Dap-Kings treat their audience to an old soul review like your parents and grandparents might have seen when they could still squeeze in to a 38 regular jacket and cruise Belle Isle looking for chicks. There’s a mean coolness to the band but that doesn’t keep them from sweating. This is music that makes you move.

Showing more than a little respect for the band that has bound to the top of the cool list with their support of Amy Winehouse on her latest album, Sharon Jones idled offstage for the first 30 minutes of the show while the Dap-Kings vamped and flirted through a handful of groovers. The crowd simmered and swayed until the Lady in Charge hit the stage.

According to her bio, Sharon Jones was born Sheron Lafaye Jones in Augusta, Georgia on May 4th 1956. That puts her at 51 years old and perfectly positioned to bridge the years between the original soul revolution of the mid- to late-60s and the slight return we’re having today. She’s too old to be dismissed as a revivalist and too young to be dismissed as a nostalgia act. She is our connection to that storied past and, as any good audiophile knows, a good connection needs to be the shortest possible signal path and an unbreakable source of power. Sharon Jones is running with all tubes glowing brightly.

The Chicago set was heavy on Jones’ last two albums and found the diminutive powerhouse inviting fans to take the stage throughout the show. Despite the sad showing for grind our fair city’s ladies displayed on stage with Jones, it would be hard for anyone short of Tina Turner herself to look anything but exceedingly white when our hostess turned up her funk meter. Man and woman alike were invited and then dismissed from the stage with the best performances coming from men, one of whom had the dopey moves to match his awful pants. The kid knew how to put on a show. 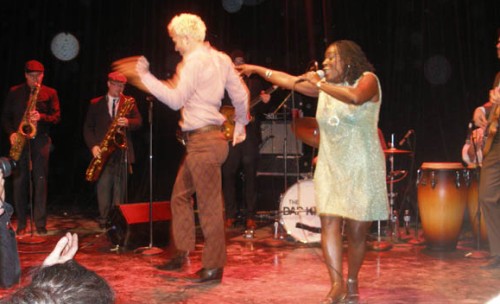 Closing her set with a wrenching take on James Brown’s “This is a Man’s World” Jones proved she understood the lyrics better than anyone in the room.

Ain’t that the truth?