Back in their heyday, everyone had a favorite. Heck, I was even in a lip-syncing group that parodied them. (I was Posh, but I wanted to be Ginger…everyone wanted to be Ginger.) Seeing photos of them now is kind of a shock. Baby was pregnant, Sporty had become the hot one, and Posh, has gone from being beautiful and mysterious to the queen of all that is tacky. The biggest surprise of it all, though, was seeing how much alike they looked. It took me a minute to identify each of them. I’m just hoping that they bring back the platform heels and awesomely revealing outfits for their reunion tour, which kicks off in San Jose, CA on December 4. 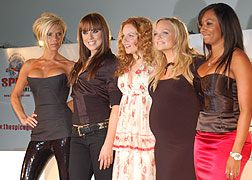 They aren’t even selling tickets yet for their worldwide tour. Any information aside from the latitude and longitude of the cities they’re playing and the date they’ll be there doesn’t appear to be available. You have to pick the city you want to see them in (sadly, Chicago is not in the cards), and then “register for a chance to see the Spice Girls play” in that location. I almost wish I could actually attend one of these shows. Not for the music, hardly even for the Girls themselves, but more to see what the fanbase looks like these days. All of the pre-teenyboppers who bought their CDs back in the day are in their twenties now and have most likely moved on with their lives. I get the feeling that it will be an audience filled with gay guys dressed as Posh, Ginger, Baby, Sporty and Scary, which, in of itself, would probably make the show worth seeing.