It was last year’s Back to Black that got everyone wound up. Its sexy buzz and grinding rhythms made us all a bit randy and proved that yes, it is possible to produce a real soul record. The fact that it came from a skinny white girl in England just made for a great story. It was like seeing this totally hot little number in a club and then discovering she has a cool accent and knows the words to more than one Nina Simone song. Maybe not love, but definitely lust at first sight.

Like so many great soul artists, Winehouse comes by her tortured moan honestly. The Independent has quoted her as claiming to be manic-depressive, and the evidence of her personal life seem to back it up. Her tumultuous relationship with the fantastically aristocratically-named husband Blake Fielder-Civil is ready fodder for Brit tabloids and has run the gamut of control freak enablement to physical abuse. 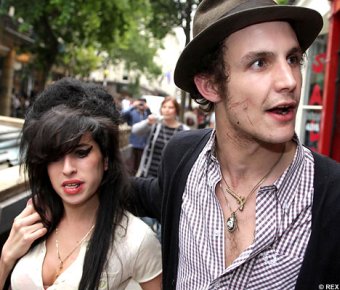 The idea that many of the songs on Back to Black were inspired by Winehouse’s relationship with her erstwhile hubby may be supported by the fact that the two agreed to enter rehab together in August of this year, after Winehouse was admitted to University College Hospital in London after slipping into a coma. The reported cause of the coma was overdosing on several drugs, including heroin, cocaine, ecstasy and the Ketamine. All of this was supposedly washed down with whiskey and vodka during a bar crawl in London. She was widely quoted on the incident saying, “It was just crazy—one of the most terrifying moments of my life… I just don’t know what got into me.”

While her family has gone public with their pleas for rehab and counseling, the jury seems to be out on Fielder-Civil, and Winehouse remains his greatest defender. Just this week, photos appeared of the couple bloody and bruised, but Winehouse denied her injuries were at her husband’s hands. No, hers were self-inflicted. And his? Well, let’s just say he knew better than a certain Von Bondie not to admit getting his ass handed to him by a girl.

But the wheels of the family wagon may be finally coming off. Winehouse’s father Mitch, discussing her recent dramatic weight loss, has compared his daughter to a concentration camp victim.

He said: “She is skinny as anything and dehydrated and looks like she has just come from a concentration camp.

“I know that if she doesn’t eat she is going to die,” said Winehouse. “There is no reason for her to want to self-destruct like this.”

He father-in-law, Giles Fielder-Civil, just this week asked fans to boycott her records in an attempt to shock Winehouse and his son into rehab.

“I think they believe they are recreational users of drugs and they are in control,” Fielder-Civil told BBC radio Tuesday. “Clearly they are addicts.”

These days, self-admitted drug and alcohol problems are worn as freely as a Fendi bag on the limp wrist of a SoHo fashion kill, but matched with undeniable talent and an air of legitimate SOUL, well… it’s hard not to be taken in by Winehouse.

And that’s why we care. There are plenty of talentless hacks with severe drug problems and personality disorders, but I try to stay as far away from them on the El as possible. It’s the infectious allure of her music that draws me to Winehouse. But who better than an addict to infuse their art with addictive additives? With a cocktail of 60s soul, rock and roll, and a smidge of dancehall beats, how can you NOT dance to her music? And if it makes me dance, it’s either good or I am drunk. With Back to Black, it’s a lot of both.

Sadly, popular music is strewn with tragic stories of burning talent consumed by insurmountable addiction. For some, it’s a cliché that has run its course and is tired as Paris Hilton. For others—for those who live with addiction as a hindrance and not a career resuscitation—it’s one cross of many to bear under the strength of creativity. Let’s hope Amy Winehouse can eventually tip the balance.

38 thoughts on “The Brutal Story of Amy Winehouse”