Yazoo at the Chicago Theatre

“Wow!” my wife exclaimed. “This place is packed!”

Technically, Yazoo’s “Reconnected” stop at the Chicago Theatre on Monday night was a few housewives shy of a sold out distinction, but there were still enough gays and grays on hand to raise a few eyebrows to those without a historical reference point or a penchant for electronic music.

My wife was four when Yazoo last performed live. I was in high school. If you do the math, that puts me at an appropriate target audience for this electronic duo’s catalog of lovelorn pathos. And you don’t need an abacus to decipher that my wife had no idea who Yazoo was when I told her “We’re goin’.”

After all, we’re talking about a band that I consider to have made one of the greatest pop songs ever (“Only You”) and one of the best dance songs ever (“Situation”) that just happens to be on the flip side of that aforementioned gem. Aside from that, they also released a pair of well-crafted electronic minimalist albums fronted by one of the most emotive female vocalists ever, Alison Moyet.

Her creative companion, Vince Clarke, brought a noteworthy pedigree to the table as well. After co-founding Depeche Mode and providing them with their debut hit single and full-length, he left and teamed up with a relative unknown (Moyet) for a whirlwind period that happened to lay an impressive blueprint that synthpop has been acknowledging for the past quarter century. When creative differences pulled the duo away from each other, Moyet continued with a notable solo career while Clarke moved on to form Erasure with a virtual Moyet sound-alike, Andy Bell. Erasure went on to achieve the level of stateside success that many of us assumed Yazoo would achieve had the duo been able to keep it together.

The news that Clarke and Moyet would be reforming for a brief tour in support of the box-set In Your Room was met with a level of dreamlike awe that was as emotional as I’ve ever experienced. Sure, I’ve had plenty of bands that I’ve been excited about seeing, but none of them seems to provide me with the same emotional attachment as this electronic duo that provided a soundtrack to every single tale of teenage break-up that I ever had.

Like the box set, the evening’s set list covered the band’s two proper releases (Upstairs At Eric’s and You And Me Both), efficiently alternating between the slower tales of heartbreak and up-tempo dancefloor shakers.

Their set mirrored the music’s minimalism, allowing for two square segments on stage, one devoted to each member. The backline contained a lit scrim resembling antiquated light-emitting diodes, capable of projecting some stunning visuals against the stage’s black backdrop. 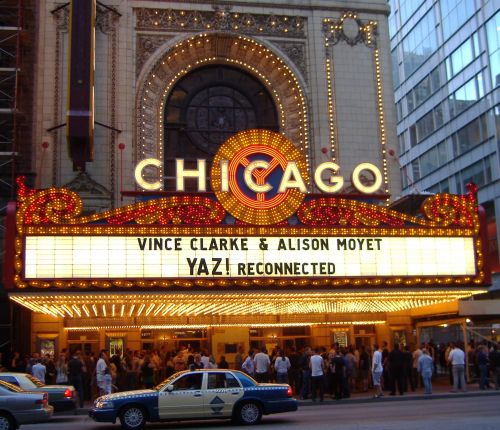 As a housewife in her early forties sat next to my wife with her husband and two kids (the boy, I’m guessing was close to eight while the daughter looked to be about thirteen), she complimented my wife on the show program she was dutifully holding for me in her lap. My wife played along, not wanting her neighbor in on the fact that she had no clue who the headliner even was.

The crowd erupted as the two made their way on stage with Moyet delivering the first heart wrenching words “If I wait for just a second more / I know I’ll forget what I came here for.” With “Nobody’s Diary” underway, the crowd was underway for an amazing, nostalgic-filled journey.

Dapper in lean black slacks, similarly colored jacket and crimson red shirt, Vince Clarke stood stoically behind his twin-synth section of the stage with the obligatory laptop controlling most of the night’s arrangements. Vince showed very little emotion throughout the evening, except on the occasions that Alison approached his area of the stage to provide him with a symbolic embrace.

Clarke’s limited mobility meant that the majority of the crowd’s attention was placed on Moyet, who herself has nowhere near the showmanship of Vince’s primary collaborator, Andy Bell. No matter: Alison’s near-constant smile was infectious, indicating that she may have been just as enamored with this out-of-the-blue reunion as the audience. She tactfully moved along with the dance numbers and reached deep within for the set’s darker material. On both sides, she delivered enough passion that caused members of the crowd to yell, “We love you Alison!” throughout the evening. Feeling comfortable with the continual supply of adulation, Moyet moved from her stage area to the front, occasionally touching the hands of outstretched fans from the first few rows.

The night’s strangest moment came compliments of the band’s strangest song, the schizophrenic “I Before E Except After C” from Upstairs. Clarke suddenly rolled out a reel-to-reel tape machine on stage, pressed play, and left it out in the spotlight underneath an audible amount of tape hiss. The song played alone, obviously treated with a few additional beats programmed in for good measure, allowing Alison and Vince about five minutes to re-energize and a few concertgoers a chance at a beer run.

The audience remained courteous and restrained for much of the evening, perhaps (like me) suffering from the surreal notion that we were actually witnessing a band who we never expected to see perform live. The politeness ended by the time “Don’t Go” was brought out, suitably hinting that we were all about to be awakened from our collective dream. The majority of the crowd rose up from their seats and gave the duo some proper ass shaking.

The encore provided the audience with the one-two punch of that first single “Only You” b/w “Situation.” It was wonderful hearing the throes singing “Only You” in unison while “Situation” amped everyone up…just in time to call it a night.

Clearly, the only complaint from me was the show’s woefully short running-length (under 90 minutes) that was representative of the band’s original shelf life (18 months). With that being said, only three songs from the band’s entire catalog were left out, so there wasn’t much of an opportunity to extend the show anyway.

But a dream for some is merely an obligation for others; my wife found the audience demographic and our collective enthusiasm for such a distant memory somewhat amusing. She sheepishly admitted that the show was good and that Moyet continues to possess a wonderful instrument in her voice, but her frame of reference was of such that she couldn’t fully appreciate how two forty-minute albums could provide such a meaningful soundtrack to so many in attendance.

In more ways than one: you had to be there.

Walk Away From Love

I Before E Except After C

Bring Your Love Down

One thought on “Yazoo Live: Another Page In Your Diary”