A few months ago, I submitted an article to Glorious Noise that was the culmination of two years’ work. The article chronicles my quest to locate a band that opened up for Chapel Hill’s legendary Polvo that essentially ruined what planned to be a memorable night. My aim was to seek revenge on that band and publically humiliate Polvo in the process.

The problem is that Polvo were so good that you can’t really humiliate them and I reached a dead end in every attempt to locate the offending opening act.

It reached a point where I was reminded by this unfinished article when it was announced that the band Explosions In The Sky personally requested Polvo to consider joining the All Tomorrow’s Parties music festival. To the delight of EITS and Polvo fans everywhere, the band agreed and I slapped on a fairly uneventful close to my article to which Glorious Noise published.

Then Polvo announced that they would be performing a few more selected dates, one of which was conspicuously close to GloNo’s headquarters in Chicago. Glorious Noise was contacted by the publicity department of Polvo’s label, Touch & Go Records with an opportunity to make amends with the band, via bassist Steven Popson.

Jake then removed all sharp objects and potential weapons from the conference room as I met with Mr. Popson to discuss the past, the future, and that trainwreck of a Polvo show, so many years ago in Iowa. [Full-disclosure: this interview was actually conducted via email, so our arsenal of weapons did not need to be removed. -ed.]

GLONO: First off, let’s get this entire reunion story off the ground: How did it come about, why did you agree to it and after the shows are over what will happen next?

POPSON: Well, as you say ‘first off’, we consider this to be more of a ‘reformation’ than a reunion. We are excited about playing music together again and are approaching the older material with new ears and desires as well as working on some new songs.

The story of us playing again is that in recent years we had been asked to play two festivals that were important to us – the most recent Merge and Touch & Go Anniversary parties — but because of our individual schedules, responsibilities, etc we weren’t able to say ‘yes’ to those. Then last fall, we were approached by Explosions in the Sky’s manager who asked Polvo to play the ATP show in England they were curating. The fact that we were able to say ‘yes’ to that one was the amount of ‘lead time’ we were given. We had 7-8 months to prepare, which we knew we would need and we did. So, the seed had been planted from earlier requests, then we had enough time to allow ourselves to get ready.

I’m assuming that everyone involved now lives miles apart from each other. Talk a little about the logistical nightmare that you must have gone through just to get everyone in the same room together to rehearse.

Actually, Brian [Quast, drummer], Ash [Bowie, guitar/vocals] and I all live relatively close to each other. Dave [Brylawski, guitar/vocals] is the odd man out in that regard as he lives in New York. But Brian and I both live in Raleigh and Ash lives in Hillsborough, so the three of us have practiced regularly since last fall. Dave travels down about once a month and we have full practices over a weekend.

Speaking of rehearsals, some of Polvo’s material is very intricate and complex, how long did it take before you got through a rehearsal and felt “That went really well! This thing could actually work!”?

I think we knew from our first sessions together that it would work – more so because it was fun and exciting playing together again and that was more crucial than anything. For me personally, it took some practice at home to remember some parts, but also we have re-approached many of these songs, so some parts have changed.

Of replacement drummer, Brian Quast…how did you get hooked up with him?

Like Eddie Watkins and Brian Walsby before him, Brian is a super person and great to have in the band from a friend perspective. Brian is a longtime Raleigh resident and musician, so we’ve all known him for quite some time. Back in the 90s, he was in a band called Regraped that were great – two basses and drums. Polvo and Regraped played a few shows together back in the day. I was part owner of a club in Raleigh called Kings that Paul Siler from the Cherry Valence also owned, so I saw and hung out with Brian all the time. Ash and Brian have played music together for years. They would jam with Ash on guitar, Brian on drums. But also, Ash plays bass in The B.Q.’s, a band in which Brian is the guitar player and singer.

These reunion dates will mean that you’ll be contending with a lot of people who are not familiar with the band’s catalog. For those novices, name two albums by other artists that you feel would best prepare them for examining Polvo’s work and then name the definitive album that should be their first stop when moving to your own catalog.

I hate to back out of this question, but I really wouldn’t know how to answer this. Its difficult to try and put music you make into context of how others hear it. I hear the music we make a certain way because of my involvement in it from creation, through changes, through the recording process and so although I like to think I can listen to it objectively and appreciate it, it still is heard through my experiences. Now, that’s not to say that I don’t think that I can’t name other bands that we sound similar to because by no stretch of the imagination do I think Polvo is wholly unique, but what someone else might hear or expect to hear is their own experience.

As to what album to check out..Well…All of them! 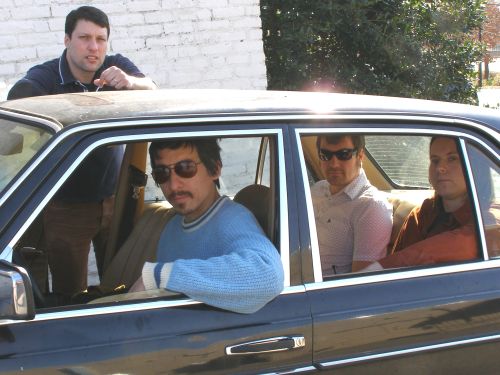 It surprised me how the last album, Shapes, was not as well received as the others. Personally, I liked how the album uses that classic rock blueprint and turns it upside down… In other words: Shapes sounded like an honest attempt at moving forward with a keen eye on the music that motivated you to begin with. Were you surprised by the reaction that it received and was there a consorted effort in trying to break away from the traditional Polvo “mold” with that record?

Thanks. First, there was no consorted effort to try and break any Polvo mold – as I don’t think we had established a set ‘mold.’ That album, as all preceding it, reflected the way Dave and Ash, subsequently the band, were writing songs. The way Shapes was made and the circumstances under which it was made, keeps it in a special place for me and I’m really proud of it as well.

Although we weren’t trying to ‘break any mold’, we did know that it would be received differently because it would have some different elements in it. I’m aware to some degree of the various amounts of criticism that have followed the record. Some of it revolve around Polvo not being or sounding like Polvo which to me falls in line with what you (said) and therefore means that if people want or wanted us to continue making similar records over and over again, then ‘yes’ we may have disappointed them…But I don’t necessarily agree with the fact that it makes the record worse or ‘non Polvo’ somehow. For me personally, there are some really good songs on there and that is obviously a vital component to any album.

For the criticism regarding ‘trying new instruments’ or ‘classic rock’, well… There was experimentation with all types of instruments throughout our catalogue and hints of ‘classic rock’ throughout, maybe just the guitar tones were different this time around and so I tend to let those roll past a bit easier.

Afterwards, was there a feeling that Shapes would be the band’s last statement? Did you know the band was about ready to fold at that point?

Well, going into Shapes, we knew it would be our last…At least at that time. For a lot of reasons our lives were pulling us in different directions, but we wanted to make one more record and wanted to tour again in support of that record…Shapes.

Tell us about the break-up story. Was it just like that Greg Kihn song?

It would be great if our cessation at the time would be good for a nice VH1 piece, but alas no – no drunken fights or kung fu kicks or yelling, etc., etc., etc. We amicably knew it was time to move on. We’ve all remained close and friends since then.

It’s been over 10 years since Polvo’s original run. Bring us up to speed on what’s occupied your time during that period.

As mentioned prior, I owned a rock club in Raleigh called Kings from 1999 til 2007. This was a great experience and I really enjoyed staying in the music community in that capacity.

Dave and I have continued to play music together as well. For the last 6 years, we’ve been playing as Black Taj, our second full length album was just released on Amish Records.

I also have a great, full time job at the NC Museum of Natural Sciences in Raleigh.

Tell us about the obligatory “worst gig ever” or an incident from the road that stands out in your mind.

I don’t know about this ….One of our worst collective experiences was very early on, no need to name specifics but we were scheduled to play a new club in the heartland of the US and I think the promoter meant well, but it didn’t shake out too well. The club, which was an old industrial building, wasn’t ready so they set up a PA in the old loading dock. This was a cinder block chute and sounded awful – no one came, so we ran through a few songs and decided it was time to go.

Finally, I can’t end without bring up an incident from the mid-90s where I saw you play at Gabe’s Oasis in Iowa City. There seemed to be a lot of verbal abuse between you and the opening act with the audience…including myself…caught in the crossfire. For over ten years I’ve been struggling with this incident, trying to find out the party’s who were responsible for what may have been one of the worst shows I’ve ever seen. It was so bad that I nearly gave up on Polvo, but then you fuckers released Exploded Drawing, so my grudge went out the window. Anyway, what was the name of that opening act and how can I locate them to seek out revenge? Do you remember this gig at all? I can easily provide you with my home address in case you decide to reimburse me.

Whew … I have to claim ignorance on this one – I am ‘getting on n years’ so to speak – but this specific incident doesn’t jive with the memory banks.

Without being overly simplistic, I have to say that I remember bits and pieces of ‘bad’ shows but, I’ve tended to remember the more positive experiences from the Polvo years.

Unfortunately, every band has their good nights and bad nights and I know we were no exception, however, after time it’s a lot easier to wipe away the bad nights and remember the good ones.

Polvo plays Chicago for the first time in over a decade on July 25 and 26 at Subterranean and the Wicker Park Summer Fest, respectively.