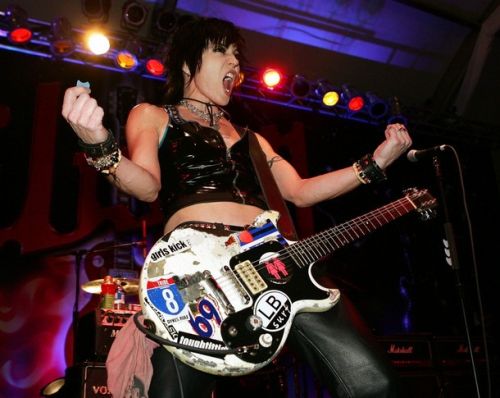 Gibson Guitar, the world’s premier musical instrument manufacturer and leader in music technology, has announced the launch of the Joan Jett Signature Melody Maker guitar, designed and produced in close cooperation with the rock legend herself (specs). The model pays tribute to the iconic Melody Maker Jett played on hits like “I Love Rock N’ Roll,” and “Do You Wanna Touch Me” and, true to her trailblazer status, marks the first Gibson electric signature model designed in conjunction with a female artist. 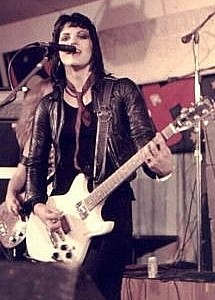 “This is my guitar. Gibson was successfully able to replicate my custom velvet hammer pick ups which have not been available for twenty years. It’s perfect for gigs as well as recording,” says Jett. “For those of you performing live, you may understand the value of being able to shave off those split seconds between playing and interacting with the audience, especially if you use your hands to communicate. I can move between the killswitch, which mutes the guitar, and playing, and then back again without a lot of in-between motion. With its no frills basic set up, it’s a perfect guitar for either an experienced player or someone just learning.”

Gibson’s Joan Jett Signature Melody Maker features a lightweight, slab mahogany body with a White Worn finish. Handcrafted to the same specs as Jett’s original guitar, the slim-tapered neck profile is similar to the Les Pauls and SGs of the mid to late 1960s. The fingerboard of the Melody Maker is constructed from the highest grade of ebony on the planet, Jett’s personal choice for her signature Melody Maker, and the headstock features Gibson’s classic, silk-screened logo.

The classic, snarling growl of Jett’s original Melody Maker is accurately captured by a single Gibson Burstbucker 3 zebra humbucker, slightly overwound with asymmetrical coils, unpolished Alnico II magnets, and all the punch and power of an original Gibson PAF pickup. The tuners are mini-Grovers with authentic “witch hat” knobs, exactly as they are on Jett’s guitar. A “kill” switch replaces the normal Gibson toggle switch, and the body is outfitted with a period-correct black vinyl pickguard. The guitar also includes such typical Melody Maker features as 24-inch scale length and the standard Gibson Tune-o-matic and stopbar tailpiece.

“Joan Jett is a true icon of rock and roll. Since the beginning she has been a groundbreaking artist and a trailblazer for women in the genre,” said Henry Juszkiewicz, Chairman and CEO of Gibson Guitar. “Gibson is proud to be working with such an influential guitar player.”

Joan Jett has been a force in the world of music since the age of 15 when she co-founded the all-girl punk quintet The Runaways. After being rejected by multiple labels for a record contract after the Runaways, she formed Blackheart Records, making her the first major female artist to own her own record label. With hits such as “I Love Rock n’ Roll,” “Bad Reputation” and “Crimson and Clover,” she has scored nine Top 40 hits and eight Platinum and Gold albums. Joan Jett and The Blackhearts continue to win over fans both new and old with their live shows, including a main stage headliner spot on the 2006 Vans Warped Tour. Jett also currently hosts her own show, “Joan Jett’s Radio Revolution,” on Sirius’ Faction (Channel 28).