Love Is All at RIBCO

Love Is All knows a lot about the vicissitudes of love. “Make out! Fall out! Make up! Fall out!” is a line from one of their best songs from 2005’s Nine Times The Same Song, one that details the rollercoaster effect that love has on each of us. No matter how far we crash, love has such a short memory that we tend to forget those low points as we pine for the uplifting feeling that it provides us.

“We came all the way from Gothenburg, Sweden to be here tonight,” announced vocalist Josephine Olausson about three songs into the set before a small crowd of a few dozen people. You could tell by the small attendance that her claim was fabricated, and one only needed to look the map to know that this Swedish quintet did not fly half-way across the globe to be in Rock Island, Illinois on a Saturday night.

Sure, Rock Island sounds cool (its name is badass, second only to Bat Cave, North Carolina) but this town of 40,000 residents is not the type of place that’s known as a regular stopping place for touring indie rockers. 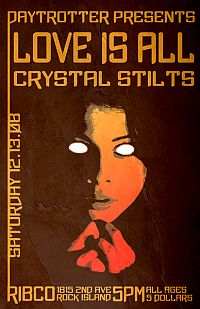 The website Daytrotter has changed that somewhat. Since Daytrotter is based out of Rock Island, its influence is such that even some fairly well known acts have intentionally detoured to the SE sector of the Quad Cities to lay down some exclusive recordings for the site. Occasionally, Daytrotter will also convince bands to stay long enough for a quick live performance for the locals, but the intent is often more admirable than the turnout. At the end of the day, it’s still a small Midwestern town and, as a result, you can expect the turnout to resemble that no matter how hip the promoters must seem to outside interests.

I knew this would a great chance to check out a band up close in a more intimate setting. It was also a rare encounter; the band was only stateside for a few weeks promoting their latest A Hundred Things Keep Me Up At Night for the East Coast after performing similar duties for the West Coast this fall. The Rock Island gig was as close to my backyard as they’d come.

The small crowd and occasional surreal moments (an old farmer in suspenders and a feed hat bumped into me at one point, on route to the restroom while the band was performing) didn’t seem to have an impact on the band’s spirits. They smiled and joked with each other while on stage, often keeping the crowd out of the joke by speaking Swedish. Olausson apologized once for unknowingly doing this before admitting that she probably wouldn’t be changing her language preferences simply for our benefit. Their songs, after all, were sung in English and have enough pop appeal to move anyone regardless of locale or country.

The set lifted from equal parts Nine Times The Same Song and A Hundred Things, with the material from the debut getting the most appreciative reception. We were also treated with a “new song” that was “written about a month ago” about the joys of sleeping in and a curious cover of Flock Of Seagulls‘ “I Ran” which, thankfully, sounded nothing like the original.

In fact, everything in the band’s brief fifty minute set sounded wonderfully like I had wanted: rhythmic, quirky, and full of energy. Johan Lindwall kept things honest with some pulsating bass work while drummer Markus Görsch refused to let the propulsion show, only allowing it to slow during the night’s lone ballad “Felt Tip.”

There may have been moments where the band was touting the downfalls of love, but I wouldn’t have known as Love Is All made everything seem like the rebound was just around the corner.

Love Is All: Blog, MySpace, Wiki.