The Daily Mail has an aerial photo essay showing the sorry state of the former home of Michael Jackson. Tumbledown and abandoned: The ruins of Neverland. 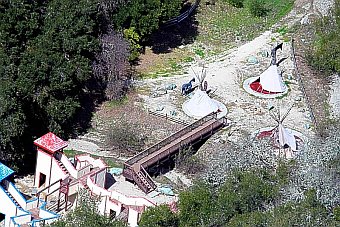 Jackson abandoned the ranch (and the country) in 2005 after he was cleared of child molestation. The state of California ordered him to close it down in 2006 for failing to pay worker’s comp (or wages) for his huge staff.

If Mike can’t come up with $25 million by March 19, he faces foreclosure. The NME says some fans might bail him out. Wow, now that’s a fan!

Update: Saved! Pop star Michael Jackson has refinanced his Neverland ranch to save it from being auctioned off, his lawyer says.