It Takes a Nation of Millions to Hold Us Back is not my absolute favorite Public Enemy album. That honor goes to Fear of a Black Planet. But as a music fan, I fully understand the importance and awesomeness of Nation of Millions. It’s an amazing album, and everything Public Enemy has done since then will be judged in reference to it.

So I was excited when I heard that PE would be performing the album in its entirety as part of Pitchfork‘s “Don’t Look Back” night that celebrates classic albums.

Then again, Public Enemy is not the same group it was the last time I saw them in concert: at some weird parking structure venue in Pontiac, Michigan, in support of Apocalypse 91: The Enemy Strikes Black. Chuck D is as righteous as ever, but Flavor Flav has undergone a very public fall from grace with the drug busts in the 90s and the reality television over the past several years. Additionally, Terminator X has retired and the Bomb Squad does not perform live with the group.

Of course, I’m not the same guy I was back then either. Back then, I was a dopey college kid who desperately wanted to be down with the revolution. And yet, even at the time I realized how silly this idea was. My friends and I used to hang out at Denny’s and whine about a particularly grouchy server: “You gotta fight the waitress named Bea.” Indeed, I was what Gil Scott-Heron would sneeringly refer to as a “four-year revolutionary,” a “silly, trite motherfucker” who needed to go find my own revolution.

So when the dudes who were pumping us before PE hit the stage on Friday told us to throw our fists in the air and shout, “Fight the Power,” I’ll admit I felt a little silly. Since then, I’m afraid I have become the Power. Maybe not totally. I mean, it’s not like I evict poor people from their homes for a living or anything like that. But I’m straight up yuppie, simple and plain. Motherfuck me, and John Wayne.

Regardless, I still love Public Enemy. And they can still blow my mind. When I first heard the 1998 single, “He Got Game,” it was so good I had tears running down my face. The same thing happened with last year’s “Harder Than You Think.” There’s something about the sound of the group that just moves me. 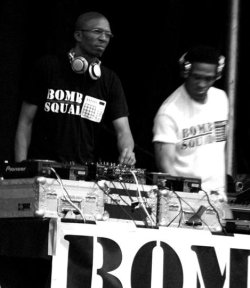 Yes, I was excited about the show. When the two DJs came out before the show, I didn’t recognize them. Despite their “Bomb Squad” t-shirts, I just assumed they were a couple of nobodies. The real Bomb Squad wasn’t supposed to be there. Hank Shocklee, after all, said he would not be there. But then the dude with the mic introduced himself as Keith Shocklee and the other guy was Hank! A very cool surprise. But as Keith repeatedly tooted his own horn about how he and Hank were responsible for all of It Takes a Nation of Millions, I started to sense that there must be bad blood between the Bomb Squad and the rest of PE. Did the festival promoters have to book them separately, I wondered.

After their half hour set, it took a while to get things started. We were requested to make some noise for Public Enemy, warned that we were not pumped up enough to get the party started. After several false alarms, the air raid sirens from “Countdown to Armageddon” finally began to blare. And the next thing we knew there was Chuck D bringing the noise. But where was Flav? You could hear his voice, but I stood on my tiptoes and strained my neck to scan the stage… Is that him? Nope, that’s Griff. Is that him? Nope, that’s some other dude. 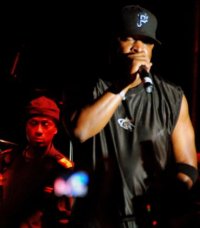 I was just confused until Flav stumbled out after the song ended and Chuck chastised him: “Flav, how you gonna miss ‘Bring the Noise’?” He seemed genuinely exasperated. Flav offered some nonsense about having to pack up his kids, and then they went into “Don’t Believe the Hype.” It was good, but you could still hear Flav’s voice on the backing track in addition to his live vocals. What the fuck? Is Flav so unreliable that they have to keep his parts on file just in case?

But whatever. It’s a live show, and where would the excitement be if everything went perfectly smoothly the whole time? Right?

It was great to see Chuck and Flav jumping around the stage so nimbly. No offense, but these dudes are old. They were old back in the day. But you wouldn’t know it by their moves on stage. I had forgotten how Chuck pounces around the stage, engaging Flav and the S1Ws in what looks something like a strange, athletic version of “Ring Around the Rosie.” It’s totally awesome. And when Chuck brought Hank and Keith out on stage and gave them props creating the sound of the album, you could feel the sincere mutual admiration. (One question though: Whatever happened to Eric “Vietnam” Sadler, the other member of the Bomb Squad?) 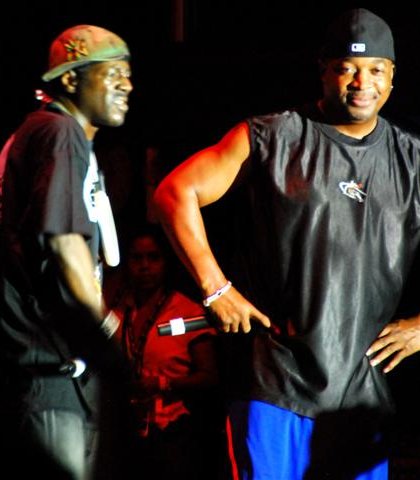 Highlights included “Louder Than a Bomb,” “She Watch Channel Zero,” and “Rebel Without a Pause.” Chuck tried his best to keep Flav on topic, but nothing could keep him from dropping “just one verse, just one verse” of “Can’t Do Nuttin’ for Ya Man” over the instrumental beat of “Security of the First World.” Chuck treats Flav like toddler, because that’s how Flav behaves. But you can’t deny the man’s musicality, and he brings something to PE that they need. That we need. Call it levity, comic relief, the juice, whatever. But at its best, Public Enemy is a well-balanced meal, containing something from all the food groups and still tastes delicious.

It would be easy to say that Flav has spoiled his legacy by stooping to the level of bad reality television. But he’s always been a clown. How the hell do you expect a clown to behave? He’s a clown, for crying out loud. The crowd booed him for plugging his upcoming show. “Who said, ‘boo’? What are you, some kind of little ghost? You should be proud of me, not hatin’.” 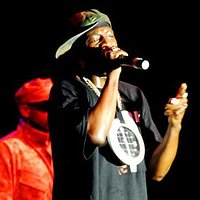 And that’s what got to me. That’s when I felt bad. I had scoffed when he plugged the show, and I had laughed when people booed. But you know what, we’re not paying his bills. The man needs money, and he’s working for it. Doing a job, making money. And we’re somehow better than him? I wonder how many kids in that Pitchfork crowd have ever paid money for a Public Enemy album.

Sure, it’s great that you paid $30 for Friday’s show, but how much of that do you think goes into Flavor Flav’s pocket? Two bucks? Tops. Decent people give more than that to the homeless guy they pass on the street on their way to work. And you think that gives you the right to tell him what he can and cannot do for a living? Fuck you!

Before the show, I heard the guy next to me saying how “ironic” it was that they were going to play “She Watch Channel Zero” considering Flav’s VH1 career. Even Chuck D repeatedly reminded the crowd that Flav was “on records before he was on television.” And that “Will Smith used to be the Fresh Prince.” No shit. But you know what? “Channel Zero” isn’t condemning the actors: it’s about the morons who watch it. I.e., if you spend your time watching “Surreal Life” and “Flavor of Love” then you’re the fucking idiot, not Flav. 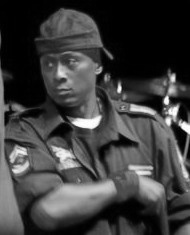 But still, his constant interruptions of the show got tiring. The worst was when he put Griff on the spot to try to get him to do his intro to one of the songs live. To prove to the naysayers that “Public Enemy does not lip sync.” This despite the fact that we could all clearly hear Flav’s pre-recorded backing track underneath all his parts and witnessed “Bring the Noise” without him on stage at all. Griff attempted to get him to lay off, but Flav persisted. Griff appeared genuinely embarrassed for Flav as he gently reminded him that the intro was “already on the beat.”

Even with these interruptions, they managed to make it through the whole album by 10pm, when the power was supposedly going to be shut down. Maybe someone at Chicago Parks and Recreation is a PE fan because they were allowed to do about a half hour of greatest hits, concluding with the obligatory “Fight the Power.” Music hittin’ your heart cause I know you got soul.