I saw Spoon at the Vic in Chicago last Friday, and they were great. I’d seen them before at Lollapalooza and at Fr0kf3st, but they kinda sucked in an outdoor setting. Like most bands do. Inside, though, they were great. Their sound guy was doing all kinds of crazy dub shit with the effects. It was cool. The absolute opposite of this acoustic demo, ha ha.

One weird thing about the show was the insane amount of Camel stuff everywhere. By now, we’re all used to the typical “Brought to you by…” banners, etc., but Camel took it to the next level. There were huge neon Camel logos on every wall, video screens playing a non-stop loop of Camel ads, plus this bizarre three-dimensional Camel shrine: 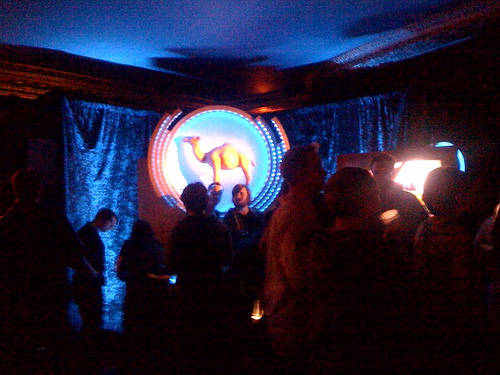 Not only that, but there was a weird t-shirt making station next to the bar where you could select a size, a color, and a design, and they’d silkscreen a custom shirt for you on the spot. Brought to you by Camel, of course.

And upstairs was something even weirder. There was a “photo studio” where you could try on a platinum wig and Elvis shades and pose for a photo with a Flying V knock-off. I’m not sure why anybody would want to do this. Is this perhaps the next level of the Guitar Hero/Rock Band phenomenon? It’s fun to pretend to be a heavy metal motherfucker.

I asked the girl running the photo station how many people had done it. “A lot,” she said.

“Around that,” she said, unconvincingly.

Who knows? Advertisers are getting desperate. And weird. 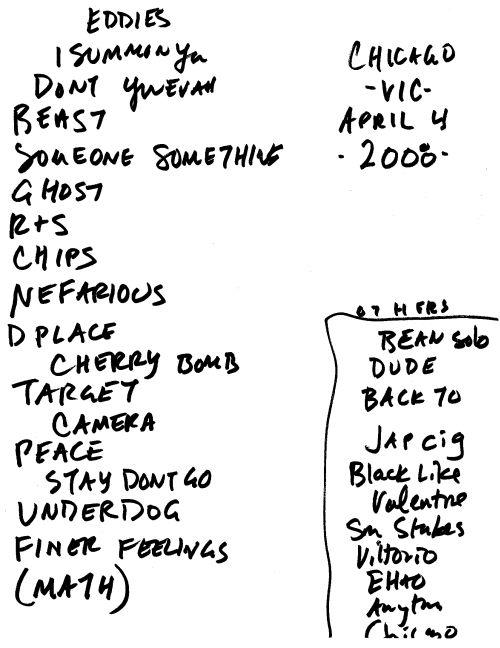 Thanks to Jolie for sweet-talking the setlist off the soundguy. And to Duz and Lusty for taking us to the show!