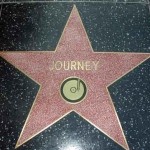 Perry admits he checks in on Journey’s star on the Hollywood Walk of Fame when he’s in town:

I think I’m gonna go by with some brass cleaner one of these days, make sure it looks nice. One time, I went there—there used to be a coffee shop right in front of it, and I was having coffee, watching people. And these two girls were there with a friend. They were of the generation we were speaking of earlier, that newer generation of fans. And they laid down on each side of it and tried to pull sexy poses with the star. And their friend was kind of hovering over them with a camera. And I ran out of the coffee shop and said, “I gotta get in on this.” [laughs] She looked up, her eyes got like saucers. And I said, “Come on, we gotta take a picture.” And I laid down, and I said, “Aww, girls, this is too sexy.” So we took a picture laying down on the sidewalk, by the star. They love the band enough to lay down on the sidewalk? In front of all these people walkin’ around ’em and shit? I thought, “Okay. I’m layin’ down, too.” And that sidewalk’s not exactly clean.

How many artists would do that? And admit to it! Only the really, really cool ones. I never would have thought Steve Perry would be that cool.

Video: Journey – “Wheel In The Sky”