The Smiths – The Sound of the Smiths (Rhino)

I’ve been a fan of the Smiths for over twenty years, back before they broke up. The first I heard of them was a 90-minute cassette with Meat is Murder on one side and the just-released Queen is Dead on the other, taped for me by a kid in my high school French class. (Jeff Young, if you’re out there, thanks!)

A few months later, I got a hold of a taped copy of Louder Than Bombs. By the time Strangeways, Here We Come came out, I had gone back and bought up their entire catalog of albums and had started to build up my collection of singles. I bought Strangeways on tape on its release date. Or my girlfriend did. I can no longer remember. Within a year, I got my first CD player and replaced all those tapes (and tapes of tapes) with shiny compact discs. I thought the sound quality was amazing, and compared to those hissy tapes, it was.

But that was twenty years ago, and digital audio quality has made incredible advances since then. Just listen to the remastered Rolling Stones ABKCO releases compared to their original CD incarnations for undeniable evidence.

Two of my favorite bands, the Beatles and the Smiths, have not yet had their catalogs properly remastered since they were originally issued on CD in the mid-eighties. And they need it.

Humorist Chuck Klosterman has dismissed the process of remastering albums as “somebody went back in the studio and made them louder,” but that’s only true if you’re not really listening. Proper remastering can make you feel like you’re in the studio with the band, and you can feel the presence of each instrument, and feel where they’re all located in the room. Back in the early days of CD technology, audio engineers sacrificed analog warmth for crisp, bright digital clarity. We realize now that those early CDs sounded pretty bad.

Best of! Most of! Satiate the need. Slip them into different sleeves…

So here we are with yet another Smiths compilation. The Smiths have a long, complicated history when it comes to comps. Back in 1984, unsatisfied with the production of their debut album, they hastily issued a collection of Peel Sessions, recent singles and b-sides, Hatful of Hollow. Later, they collected their singles and b-sides from 1985-1986 as The World Won’t Listen. Since neither of those comps were released in the U.S., American fans were given a separate compilation that combined them, but not exhaustively. Each of those three comps contains songs (or at least mixes) that are exclusive to it, which is frustrating for completists. 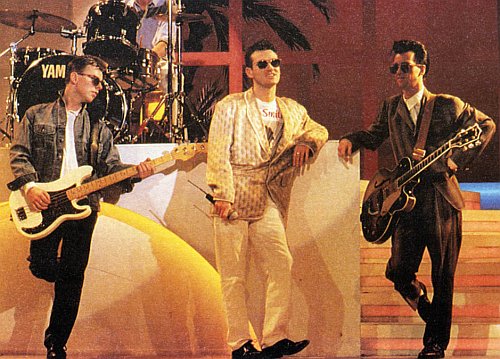 This new collection, The Sound of the Smiths, follows in the tradition of posthumous comps such as Best I and II (1992), Singles (1995), and The Very Best of The Smiths (2001), except unlike all of those, this new one included the cooperation of Morrissey, who provided the title, and Johnny Marr, who supervised the remastering. They both supposedly “assisted in the track selection,” but that’s doubtful since the track listing was announced before Morrissey was brought on board, when they first announced it with the original title, Hang the DJ: The Very Best of the Smiths. The only differences are that Hang the DJ was originally going to include “Reel Around The Fountain” and not “Nowhere Fast” on Disc One, and “I Keep Mine Hidden” but not “Wonderful Woman” or “London” (live) on Disc Two.

If you’re a big enough fan to own all four original albums and a couple of the original compilations but not such a fanatic to have collected all of the original singles, there’s still quite a bit of exciting stuff for you on Disc Two. All of it has been previously released, but mostly as b-sides to out of print singles: “Jeane,” “Wonderful Woman,” the instrumental “Money Changes Everything,” the live versions of “Handsome Devil” and “Meat Is Murder,” the Troy Tate demo of “Pretty Girls Make Graves,” the live cover of “What’s The World” by James that was only available on cassingle… It’s nice to have them on CD even if there are notable exclusions: “I Keep Mine Hidden,” “Work Is a Four-Letter Word,” “The Draize Train,” the live version of “Some Girls Are Bigger Than Others,” etc.

Also, where is “Rubber Ring,” the b-side that’s widely considered (at least by me) to be the best song ever?

But what about the mastering? It was supervised by Johnny Marr after all, so it’s got to be good, right? Well… Sure, it sounds good. But mostly, it just sounds…louder.

There were a few moments when I heard things I’d never noticed before, such as the tremolo guitar in the background of the chorus of “This Charming Man” that sounds exactly like the guitar sound Johnny Marr later used on “How Soon Is Now?” But overall, more often than not and especially on the early songs, I was just annoyed by the tone of Mike Joyce’s cymbals. Sure, there’s noticeably more separation, but I was hoping to be able to distinctly pick out all 15 tracks of Marr’s guitars on each song. Maybe I need better speakers, but I’m not hearing much that I haven’t been hearing for twenty years.

If you’re new to the Smiths, this is probably a fine place to start. It’s got a ton of great songs and they all sound better than they’ve ever sounded. But as a fan, I would have much preferred remastered deluxe reissues of all the original albums, expanded with all of the singles, b-sides, Peel sessions, alternative mixes, and live versions of the period.

Instead, the Smiths’ full catalog (seven albums) will be available digitally from Rhino’s digital partners. Not sure who those digital partners are, or if we will ever see remastered physical reissues of the albums. The word from Rhino is that “there’s no further info on the catalog re-issues, only that they’re coming out next spring. No word on whether they’ll be on CD or not.” Until then: Buy both, and feel deceived…

11 thoughts on “The Sound of the Smiths”