Explain this: last night I had one of the strangest dreams of my life. I dreamt that I was in a reformed New Kids on the Block. Now, rumors abound that the once mighty boy band is reforming for a yet unannounced world tour, but I have insider information. I was IN the band.

The dream started off with me meeting up with the boys at a family reunion or picnic or something. It wasn’t clear where we were or why but that didn’t seem to matter. Within minutes we were joking about our upcoming reunion. My main concern was that I wouldn” know how to do the dance moves. A failed attempt confirmed my fears with me and the boys laughing and slapping backs. But that’s how we roll. We were hanging tough and we’d get it together in time for the tour, as long as everybody was on board.

Donny Wahlberg seemed a little depressed about even having to do this tour, but he lightened up—as Donny always does.

Joe McIntyre was a dwarf. Seriously, he was maybe two and a half feet tall and hobbled with that weeble wobble gait that often afflicts the Little People of the world. He and I had the most interaction though talking about what we’d done since NKOTB had broken up. He, of course, had a fine little (pardon the pun) acting career and had become friends with Matt Roloff of the The Learning Channel’s Little People, Big World. If you haven’t seen this charming show, do yourself a favor. The Roloff family is the new Cleavers and Matt is king schmoozer. It came as no surprise that he and Joey Mac were friends.

True to real life, I didn’t know the names of the other New Kids and made a real effort to avoid talking to them lest they figure that out. Imagine how embarrassing it was for me to come face to face with a couple guys with whom I worked to dominate the charts in the early 90s and take advantage of dopey girls the world around. You’d think I’d at least know their first names… 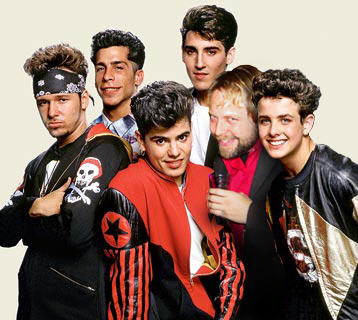 I was shaken from my dreamy reunion by my clock radio blaring an onslaught of noise that came courtesy of my son messing with the knobs yesterday. It was a shocking return to the real world where I am not a member of New Kids on the Block, but I am still avoiding two members of that band because I can’t remember their names.

4 thoughts on “To Sleep, Perchance to Dream of NKOTB”