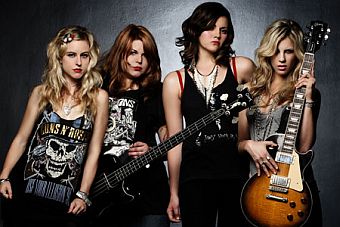 MP3: The Donnas – “Get Off” from Greatest Hits Vol. 16, out now on the band’s own Purple Feather Records.

Holy crap, by the end of this summer, all four of the Donnas will be thirty years old. Time flies. This is the second album they’ve released since parting ways with Atlantic (WMG), and despite its title, Greatest Hits Vol. 16 contains some new recordings, some b-sides, and some live tracks. Now that they’re officially grown-ups, after spending more than half their lives in the band, perhaps it’s time to update their schtick. Or is the plan to keep recording the same hard rock album over and over forever like their early inspiration, the Ramones?