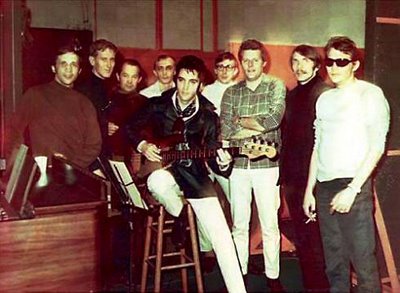 To commemorate the 40th Anniversary of Elvis’ historic American Studio session that resulted in “Suspicious Minds,” “In the Ghetto” and “Kentucky Rain” among many others, Sony Music will release a deluxe version of From Elvis In Memphis, including all the 32 masters recorded at these sessions. These recordings have been remastered from the original album masters for optimum sound quality. More details on the release to come.

But hey, what about Suspicious Minds: The Memphis 1969 Anthology, the two-disc comp that was released in 1999? Or the more concise Memphis Record, originally released back in 1987? First of all, those are both out of print. Secondly, the mixes on the former left a lot to be desired while the latter suffers from the muddiness that renders most compact discs manufactured in the 80s unlistenable. But if you have either of those and think they sound fine, then there’s probably not much to entice you to pick up this new collection.

But if you aren’t familiar with this material, you need to check it out. It represents the first real recording session after Presley’s ‘68 Comeback Special, and the first recordings since the Sun Records days where Colonel Parker was not involved. In fact, Elvis actually stood up to his manager for one of the only times in his career when Parker threatened to block the recording of “Suspicious Minds” if the publishers wouldn’t give up the typical percentage of royalties; when producer Chips Moman told the Colonel to go fuck himself, the King insisted they continue. “Suspicious Minds” turned out to be his last #1 single.

8 thoughts on “From Elvis In Memphis Remastered”