Where did the idea to actually draw images on vinyl come from?

As a teenager, I learned the pointillistic technique in high school art class. In the same class I did a spare project with white pencil on black paper. The records came from the local library donations I had first dibs on because my mom ran the used book sales there. I had duplicates of my favorites. One day the idea struck me to paint on one.

What’s the most common requests you get?

Led Zeppelin has sold the best at Wild About Music on 6th in Austin. As far as commissions, I’m thinking it’s the Beatles, but there haven’t been many duplicate requests.

Boba Fett on an Empire soundtrack.

Do people really ask if the records still play?

Yes (sigh), yes they do. I think it’s a sign they don’t understand what they’re looking at, wondering if it’s on the record, did a computer do it, what’s the medium and so forth. Makes for a fun, if awkward, chuckle.

Do you see an uptick in interest for vinyl or is this generally nostalgia?

There have been a few commissions since vinyl’s “comeback” because a few people buying new vinyl have found my art, but mostly it’s nostalgia.

Ever cringe at the thought of taking a record out of commission? Any records you really hesitated to work on knowing they’d forever be unplayable?

Hell yeah. Fortunately I have my iRecord so I can at least turn it into an MP3, but I couldn’t believe I was painting on a Beck album, or a Nick Drake. Icky Thump by the White Stripes is staying sealed, and I bought two copies of Forth by the Verve to keep one.

How do you promote yourself and your art?

Right now, the way I’m most excited about promoting my art is using it to promote charity. The best example is the piece of director David Lynch I did, which he autographed and is now at his foundation to be auctioned off for them. I’m also going to be doing a show at the local chain of used book/media stores called Bookmans in September, with $50 per piece sold or commissioned going to Ear Candy Charity, which provides instruments to programs for kids.

My point in creating these pieces is to celebrate human creativity, music and art. If I can in turn help inspire and support more creativity, that’s awesome.

Are you a music fan? Do you collect records?

Yeah, I have around 2000 records, including about 100 Beatles w/ some sweet bootlegs. And right now, my wife and I are really into Gnarls Barkley and the Kings of Leon. My taste is ALL over the place though, from modern classical to jazz funk to industrial to grunge to whatever Blind Melon is. 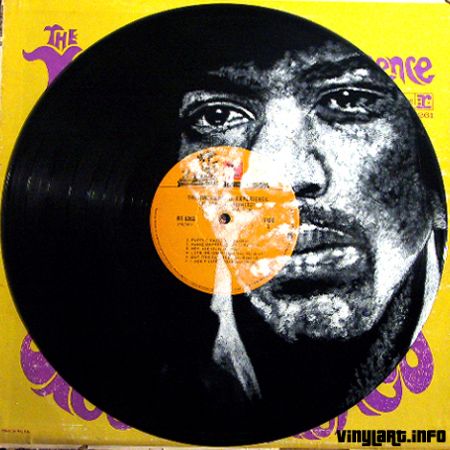 Check out Daniel’s online gallery for past work and his FAQ for more about what he can do. Yes, colored vinyl is an option and Jake would like a commission of Herb Alpert’s Whipped Cream and Other Delights for his birthday in August.