Blind Pilot and the Broken West at the Picador

With a date that fosters superstition (Friday the 13th), a lunar phase that prompts strange behaviors (full moon), and late winter weather conditions that provide easy travel conditions (no snow on the ground), the ingredients were as close to ideal for a good ol’ club gig as one could get. Yet for some reason, the vast majority of Iowa’s largest college town found other forms of entertainment and left two fine up-and-coming rock bands with national credentials up to their own devices in front of about 50-75 people, a crowd that diminished as the night wore on.

The explanation might be that kids today no longer enjoy late shows, particularly ones with two acts, a regional opener (Oui Bandits from Omaha), and a 9:00pm door time. I can appreciate the resistance for late shows—I’m old and have kids—but I think the real reason was that the big draw tonight was Blind Pilot, and they happened to draw the straw for the middle set performance and people trickled out after their set.

Blind Pilot from Portland, Oregon—not to be confused with the nearly thousands of other bands that share the same name, in both plural and singular connotations—evidently have amassed enough of a following that they can bring together a few dozen people on their own in the Midwest.

After gaining notoriety for their bicycle tours of the American Northwest, Blind Pilot brought their indie-folk repertoire to Iowa City with an expanded touring line-up that featured a stand-up bass, pedal steel, violin, trumpet, and a xylophone. I’m assuming that there’s a van that’s assisting with the passage of these instruments, but the band would be in contention for tour of the year if they managed to get here powered by bike pedals.

However they arrived, the expanded sound was welcomed. Originally comprised of Israel Nebeker on guitar, vocals, and Ryan Dobrowski on drums, the duo share not only share a geographical similarity with the Shins, but certainly a spiritual one.

Without the additional musicians, the two align nicely with some of James Mercer‘s more acoustic moments. With them, Blind Pilot actively chart a path to a time when comparisons to the Shins won’t be necessary. 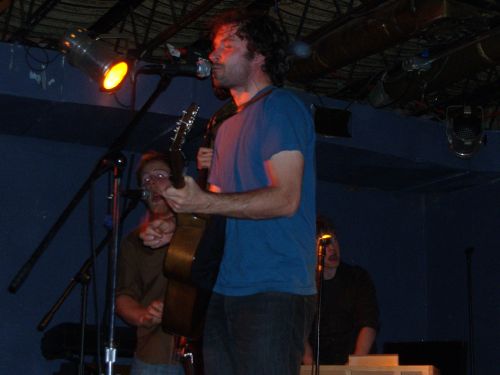 Lifting generously from their debut 3 Rounds And A Sound, Blind Pilot are transforming that album and themselves into a cohesive unit. If one of the complaints about the band’s first proper offering is how the underlying melancholy sounds too beautiful to be noticed, particular when the instrumentation is so sparse and Nebeker’s voice seldom rises from a precious croon.

The added instrumentation helps and the emotional levity of some of Blind Pilot’s material is suddenly apparent thanks to the careful placement of a trumpet, or a stirring sweep of a violin bow.

The best news is that Blind Pilot can only get better with this configuration. The band is still getting their sea legs-some of the songs began to take flight, only to be waved in by Nebeker at the moment they began to transcend their original blueprint.

Additionally, they’re getting used to dealing with the dynamics of their audience, many of whom have never heard the band before. While taking too long to decide what their next song would be, a rather loud audience member instructed the quieted band to “Rock!,” a request that seemed to unsettle the band even more. They responded with a quicker number—smart move—but it was clear that this, their first national tour, is putting them in situations out of their normal element and every mile of experience will translate into an even better performance the next time around.

The Broken West, on the other hand, are no newcomers to a live setting. They have crossed the country a few times while supporting their last two releases on Merge and their Friday night show in Iowa City marked the band’s third stop there in as many years.

So why did they sound less proficient than their virgin tour openers? While the Broken West’s first Iowa City performance was an exercise in spirited need for approval and their second one an example of a band showing appreciation for their increased patronage, this most recent set was a clusterfuck of momentum killing oddities and pointless jaunts into the inner obscura of their limited catalog. I don’t know if it was the noticeable exodus that precluded the West’s performance that prompted them to dig deep into their first e.p. and towards lesser known tracks from I Can’t Go On…I’ll Go On (review)¸ but they certainly made no attempts in trying to retain what little audience they had left on Friday evening.

What’s frustrating is that the Broken West showed signs early in their set of a band that was learning a few things from all of that time on the road, namely putting together a good list of songs for their live show. A lot of the best material that night was from their underappreciated Now Or Heaven (review), which took on new directions and explored different arrangements. “Ambuscade” carried on past the five-minute mark with some nifty Velvet Underground guitar interplay and bassist Brian Whelan‘s turn on “Got It Bad” took on a surprising groove with a nice bit of guitar bite at the end where, on the recorded version, the space was served by layers of synthesizers. 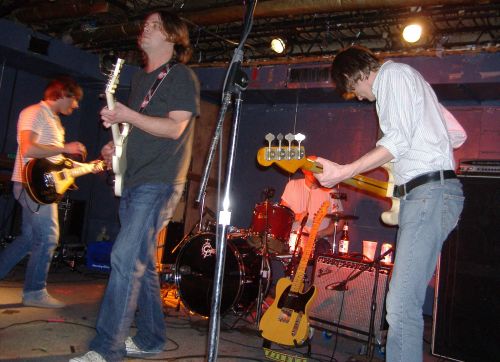 The air that once lifted the promise of a good set began to escape around the time when vocalist Ross Flournoy resorted to visiting his phone to check on the lyrics to Tegan and Sara‘s “Back In Your Head.” I’m of the opinion that this is the sort of thing that’s better suited for soundcheck instead of right before starting the number. The set ended with a meandering version of “Baby In My Arms” that chimed its way into a redundant mess before the band suddenly ended the song, unplugged their instruments, and left little reason for the remaining audience to request an encore.

Thanks to previous encounters with better results, I’ll chalk up the Broken West’s lackluster show on Friday night as a mulligan; an off night after what may have been a string of stronger performances. But coming on after a strong showing by newcomers Blind Pilot provided a glaring reality: While Blind Pilot is using their first national tour to explore new possibilities with their material, the Broken West need to find a way to re-channel their own sense of adventure and wide-eye optimism.

• The Broken West – “Down In The Valley”