“Canadian pirates” is what the music dealers call publishing houses across the line who are flooding this country, they say, with spurious editions of the latest copyrighted popular songs. They use the mails to reach purchases, so members of the American Music Publisher’s Association assert, and as a results the legitimate music publishing business of the United States has fallen off 50 per cent in the past twelve months. Their investigation has revealed that all of the most popular pieces have been counterfeited, despite the fact that they are copyrighted, and by unknown publishers are sold at from 2 cents to 5 cents per copy, though the original compositions sell at from 20 to 40 cents per copy.

According to this handy inflation calculator, “What cost $.40 in 1897 would cost $10.22 in 2008.” That’s kinda a lotta money for sheet music, isn’t it? Why didn’t those folks back then just go to AltCountryTab and download the music they wanted to play for free? Hey, look at that! Guess where AltCountryTab is based out of? Yep: Canada. Canadian pirates! 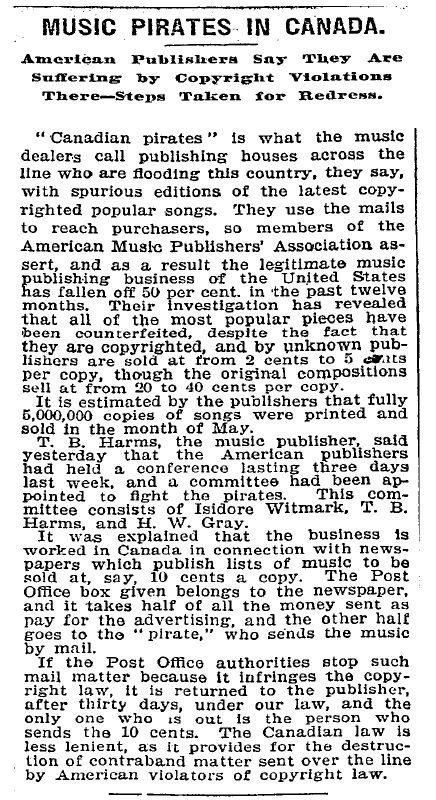