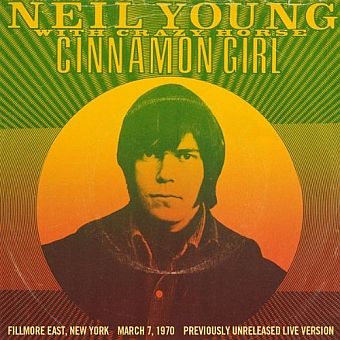 Good old Neil. Ever since he released Crazy Horse at the Fillmore 1970, the debut release from his “Performance Series Archives,” we’ve all been complaining that he didn’t include “Cinnamon Girl.” It’s there on all the bootlegs. When the Archives box came out, we secretly hoped he’d include it where it rightfully belonged.

Neil apparently relented back in September and included it as the third BD-Live download for people who bought the Blu-ray version of the Archives. And now, without as much as an announcement on his website, he’s selling it as a downloadable single on Amazon (99 cents) and iTunes ($1.29).

Glad it’s out there and available, but it’s a bit of a bummer that those of us who opted to purchase the CD or DVD version of the Archives will only get to hear this song in lo-fi, compressed MP3 or AAC format. I know, I know, we got what we bought, caveat emptor, but stuff like this just makes Neil look like a greedhead.