The Dead at Allstate Arena

I didn’t know what to expect heading into the The Dead’s Spring Tour. I had last seen the Grateful Dead back in 1991 — yes, during the Bruce Hornsby era — and to cut a very long story short, let’s just say I was a Skeletons/Touch kind of fan back then. Today I’m a full-fledged Dead Head, thanks to the wonder that is the Live Music Archive. So I was excited to get my mail-order tickets, but like any fan of the band, my emotions were a bit confused. No Jerry means a whole lot of things, but sorting out exactly what those would be this time around was anyone’s guess.

Would the Heads come out for the tour en masse? Would a new generation of kids get their first sweet whiff of body odor mixed with pot smoke? Sure as a dancing bear shits in the woods. But my real concern was whether this Dead would still sound magical. The alternative — a bunch of fogies playing a greatest hits tour to restore their retirement accounts to pre-2008 levels — wouldn’t have been all bad, but it wouldn’t have been good. While I was only fortunate enough to attend a single one of the 22 shows, I listened to several more, thanks to the LMA and some live broadcasts on the Grateful Dead Channel on Sirius XM Radio.

So here’s the deal: This Dead lineup proved that they are yet another legitimate chapter in the Grateful Dead story. With Warren Haynes playing lead guitar and Jeff Chimenti on keys they have a different sound than past incarnations, but the shows came off well. Despite some bizarre set-lists — occasionally because of them — they were consistently good. Not great, but definitely fun, full of energy and clearly enjoying themselves on the stage. Most importantly, The Dead proved that they are still willing and capable of striving for those epic jams that have long signified their identity. That’s the difference between this band and more conventional rock acts like the Rolling Stones and the Who, what with their tired three minute doses of now-dated rebellion. In this way the Dead more resemble jazz musicians than classic rockers. Anyone who has seen someone like Sonny Rollins still blowing deep into his 70’s will tell you that old jazz musicians can be absolutely amazing. So can these guys.

That said, if you decided to sit out this latest incarnation of the Grateful Dead, I don’t really blame you, especially if you live in the Midwest. With most of the shows on the coasts, there weren’t too many options outside of the two nights in Chicago (actually Rosemont, Ill.). Had I known how awful a venue Allstate Arena is, I might have reconsidered myself. But I did suffer the idiotic security guards and understaffed beer lines, and I’m glad I did. (Even happier that I didn’t let the miserable conditions kill my buzz.) But karma has a nice way of working things out for Heads, and our cosmic reward is that we Midwesterners get the Dead all to ourselves this summer. Their only scheduled appearance comes on the 4th of July at the Rothbury Festival. With 2-day weekend tickets costing $150 plus fees, and including performances by Bob Dylan and Willie Nelson on Sunday night as well as other bands during the day, the price even seems cheap compared to the benjamin the Dead were charging for many of their Spring dates.

GloNo was just issued press credentials for the entire Rothbury weekend, so as long as AT&T’s network doesn’t go down, I will be there Twittering from my iPhone. And the ticket I already purchased? It’s now a miracle for a good friend. 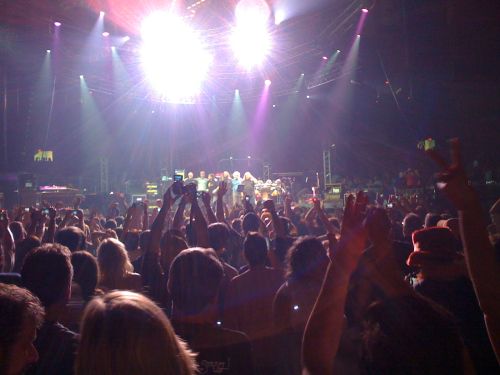 2 thoughts on “On to Rothbury: Wrapping Up the Dead Spring Tour”